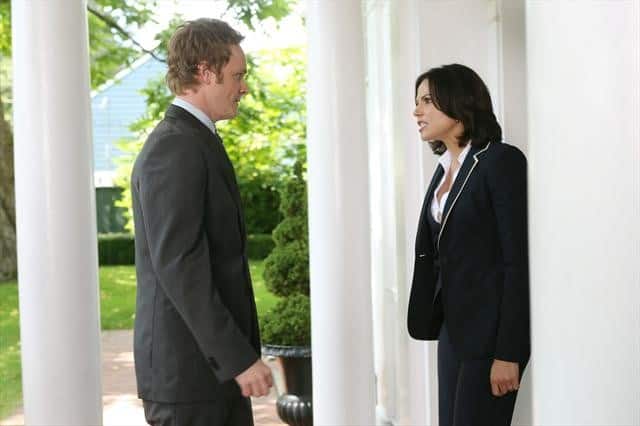 The fairy tale is nowhere close to being over as ABC”s ONCE UPON A TIME returns last night with “Broken.” The curse has been broken, indeed, and magic has returned, in limited form, to Storybrooke. Yet, their land is destroyed, according to Regina (Lana Parrilla), so they remain stuck in the real world. How can they get their home back, or will they try to build a new one here?

“Broken” shows us many familiar faces to remind us of who all is in Storybrooke, but mostly sticks to the core group of characters for the central story (This, somewhat regrettably, though it won’t likely affect the size of his role,  as he never did make it into the inner circle, no longer includes Jiminy (Raphael Sbarge)). It’s hard to complain about getting a glimpse of these beloved characters, and, considering their small part, they could easily have been dropped from this episode, which would make the world feel sadly smaller.

Most are out for Regina’s head, of course, since she is the face of their misery. But Henry (Jared Gilmore) maintains a little sympathy for the woman that raised him and convinces Emma (Jennifer Morrison) to protect Regina. It’s kind of hard to fathom why a kid who believes his mother is secretly an evil queen for so long doesn’t want to see her hurt. But the relationship between parents and children can be complicated. And although Henry does provide a possible salvation for Regina, she is really going to have to work hard to regain his affection after the events of “Broken.” Not that they are her fault.

See, Rumple (Robert Carlyle) promises Belle (Emilie de Ravin, upgraded to series regular), that he won’t kill Regina, so to get around this, he unleashes a wraith on her. Emma springs to the rescue, aided by her parents, Snow (Ginnifer Goodwin) and Charming (Josh Dallas). They save Regina, but Snow and Emma fall through a portal after the wraith, leaving Charming alone to care for Henry.

Besides Regina, Rumple is another soul that must be saved. While Regina has Henry as a motivation, Rumple has his Belle back. Initially, that is not enough to get him to change his ways. But her continued presence can only be beneficial to him. Will she help him find a way to not be the Dark One anymore? That may or may not happen. She will, however, likely to influence his actions to be a little less evil.

Not that ONCE UPON A TIME is going to make its villains all warm and cuddly. Both Regina and Rumple still have a sharp edge to them, and it will not be rounded out anytime soon. Plus, with creatures like the wraith, new dangers will be introduced. Have no fear; ONCE UPON A TIME will not fall into a “happy ever after” anytime soon which, will satisfying, would also be boring.

The relationships between Snow, Charming, Emma, and Henry are very awkward in “Broken.” Technically, Snow and Charming are Emma’s parents, even though they appear to be the same age, and it feels odd for Henry to think of a couple so young as his grandparents. Also, Emma feels abandoned, as anyone would, by her parents, since they left her alone all these years. Yes, it was to save everyone, but there are still those emotional issues that would come from being set adrift, no matter what the intentions behind it. This makes all of these interactions seem odd.

Oddness is not a complaint, however. Given the very strange circumstances, it would be far worse if the characters quickly hugged and all was right in the world. There are a lot of unresolved feelings, and even if the feelings may not be completely logical, emotions seldom are. This uneasiness is natural and right, lending an authenticity to the characters.

As mentioned, magic is back in the real world, but it’s unclear exactly what that means. Rumple has some, certainly, but Regina is unhappy to discover that she does not. That is, until Emma touches her. All of the sudden, Regina can do things again. Is Emma the key? Will each person she touches get some power? Yet, not every storybook character had powers. The rules of this are completely murky at this point, but at least it feels like the writers have a handle on it, even if they aren’t going to share that with us yet. Bottom line, Emma remains the key, her importance no less after breaking the curse.

The only thing that really bugs me in “Broken” is that the storybook names and real world names are used interchangeable. Presumably, the characters remember both lives now, so they see each other both ways. But it’s weird to here Mary Margaret called Snow in Storybrooke, and then called Mary Margaret again a few minutes later. Are they forever stuck with two identities now? Can we not settle on one moniker per person? Even if they get to decide which it is, and some pick names from each world, it would be preferable to the current situation.

We still don’t know who Dr. Whale (David Anders) is in the fantasy world, a mystery alluded to in “Broken,” but not explored. This tease only makes me want to know more.

And what of the mysterious man (Michael Raymond-James, Terriers, True Blood) who lives in the big city, but gets a note from a pigeon? Is he Rumple’s son? If so, did he know about the curse, and was he working to break it? Or is he the March Hare, since he has a Hatter sign in his apartment? Is it possible that some of the storybook characters did not dwell in Storybrooke? How did the curse and its breaking affect them? Is this man on his way to Maine? Who sent the note? A wonderful mystery to kick off the new season.

Viewers also get another storybook story. Sleeping Beauty (Sarah Bolger, The Tudors) is awoken by Prince Phillip (Julian Morris, Pretty Little Liars). But before they can ride off together, a wraith attacks Phillip. Even with Mulan (Jamie Chung, Samurai Girl) there for support, the women can’t save Phillip from losing his soul.

Far more interesting, though, is the revelation that a small corner of the fantasy world survived Regina’s destruction, and time stopped for twenty-eight years then restarted, same as the clock in Maine, they are aware of this, and have banded together to…, well, who knows? Snow and Emma are thrust into this place, so through them, viewers will get a chance to see what the other consequences of Regina’s spell are. How cool!

“Broken” is a terrific return for ONCE UPON A TIME, furthering the arcs beautifully, while providing enough new mystery to keep the story magical. New episodes air Sundays at 8 p.m. ET on ABC.