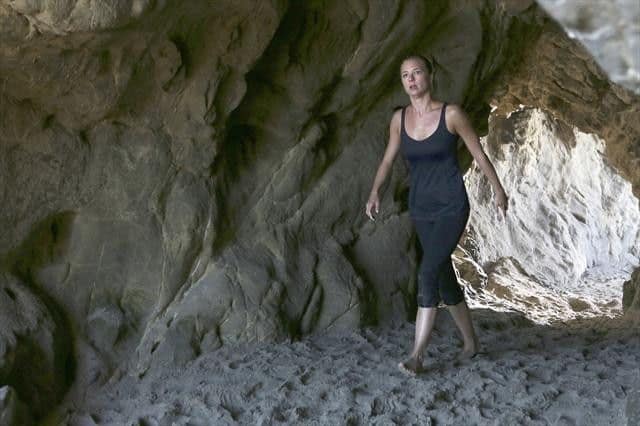 ABC left REVENGE fans a heck of a cliffhanger last spring – the death of Victoria Grayson (Madeleine Stowe) in a horrific plane crash. As the season two opener, “Destiny,” begins, lights play over a wreck in the ocean. It looks bad, and based upon what viewers are hearing, survivors are unlikely.

But this isn’t Victoria’s accident. This is Jack’s (Nick Wechsler) boat, three months into the future. Is it smart to replay the same formula that worked for season one, where we saw Daniel (Joshua Bowman) apparently shot, and then, months later, found out that it wasn’t he who was dead? Well, it does provide continuity for viewers, keeping the tone of the show the same. But it could also grow stale pretty quickly after a few seasons. The tease technique is great, but one has to be careful not to overuse it.

It would be folly to try to guess who the lifeless arm belongs to that the camera glimpses in the wreckage. With plenty of story left to happen before the sinking, there will be guesses galore, and enough twists to keep the mystery interesting. One thing is relatively certain thought: it is extremely unlike that Jack is the one that is dead. And many fans would be thrilled if it turns out to be Amanda (Margarita Levieva).

Speaking of death, losing Victoria cuts the soul out of REVENGE. She is a fantastic villain, and the first half of “Destiny” feels empty without her. It looks like a few others might want to fill the vacuum she left, but they aren’t nearly as compelling, and would feel hollow in Victoria’s place. REVENGE needs Victoria just as much as it needs its lead, Emily (Emily VanCamp). They are really the only two characters who aren’t expendable.

Which is why Victoria’s survival is not a surprise. The press screener stops before that point of the episode, probably because the network is trying very hard for the fake out. In 2012, when this sort of thing has been done over and over before, surprise isn’t going to happen for many cynical viewers. Perhaps realizing this, REVENGE does not make the Victoria reveal the end of the episode, but rather, it is done in the middle to further the story along.

These elements do not come across as fresh and original. But REVENGE isn’t trying to break new ground. It’s trying to be the best soapy drama it possible can be, a guilty pleasure treat for the masses who like watching rich people backstabbing each other and quests for justice. REVENGE knows what it is, and delivers well enough on that promise to stay worth watching.

Now that we know Victoria is alive, the next question is why she stays in hiding, and what she is planning. She has help from the White Haired Man (James Morrison, 24), which explains why she didn’t die on the plane, since the WHM is the one who blew it up. Is Victoria a pawn of his, or a willing partner? If she is a pawn, how soon before she double crosses him?

The White Haired Man is an interesting character because it seems like he is brought into the series just to save the Graysons from going down. After all, for the plot to move along, Emily must make some headway on getting revenge for what happened to her father (James Tupper). If the Graysons were the ones behind everything, she would be frustratingly stalled for the entire run of the series, since Victoria cannot be taken out of the show without killing it. The White Haired Man is likely only the first of the shadowy puppet masters behind the scenes that Emily will face.

Emily herself is really struggling with this mission, having failed in the first battle. She has to flee to Japan for further training from Takeda (unfortunately recast, as Cary-Hiroyuki Tagawa doesn’t look much like the original actor, Hiroyuki Sanada). But her head still isn’t in the game, having learned that her mother (Jennifer Jason Leigh, Weeds) was also screwed over by the Graysons, and is still alive. This clouds Emily’s judgment, and she sets off, unready to engage again.

Poor Emily. Her emotions are frequently her downfall, and it’s why, after a productive start, she keeps failing to reach her goals. We don’t want to see her grow cold, which is what is needed to get her revenge, as then she would become an unlikable character. So instead, we have to watch her fail. There just isn’t a way to win for the girl who has had such a rough life. Not that she’s going to stop trying. This builds an internal journey on top of her mission that makes her more sympathetic to fans.

Adding to Emily’s woe is that her love, Jack, is trying to move on with Amanda, who claims to be pregnant with his child. One has to assume that she’s lying because, if not, then Jack is going to be stuck with a woman he doesn’t love. It would be far neater if she is telling the truth, though, and he has to break free from her anyway. As Levieva has not been made a series regular, Jack should be able to succeed, sooner rather than later.

Will that mean a happy ending for Emily? Probably not. As much as she might be tempted to settle down with Jack, she is too tortured to let go of what happened to her parents. Even if she were to be with him, she would still be haunted by events, and would still seek retribution, which is not a recipe from which to make a good relationship. So perhaps it’s better that Emily can’t be with Jack, so she won’t hurt him.

Of course, there seems to be a lingering spark between Emily and Daniel, even though Daniel has moved on with Ashley (Ashley Madekwe). Ashley has her hooks into him for the status and the money, and won’t let go easily. But Daniel isn’t in love with her, and even though Emily broke his heart, he would still take her back, maybe even change for her. Love is his weakness, and it might also be the path to his own redemption. Emily might consider a reconciliation if Daniel decides he’s not his father’s son, after all.

All in all, a fitting return, if slightly disappointing in its predictability. REVENGE airs Sundays at 9 p.m. ET on ABC.