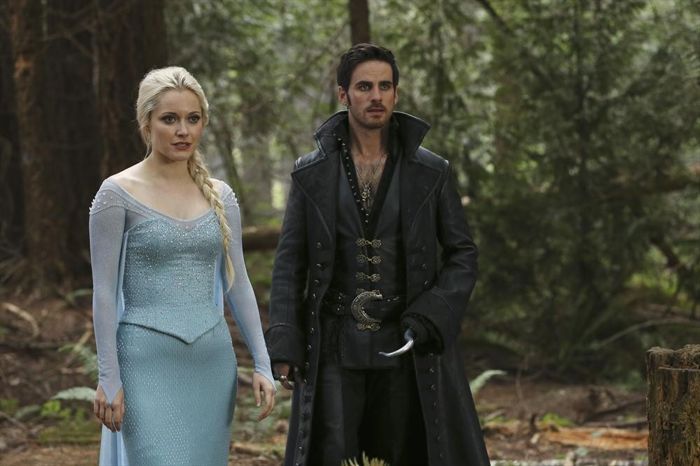 This week’s installment of ABC’s ONCE UPON A TIME, “Rocky Road,” is an interesting because it’s full of exposition, leaving us with more questions than answers. As our heroes race to save a slowly-freezing-to-death Marian (Christie Laing), they encounter a new villain who seems a little too familiar with them. In flashback, the introduction of said baddie doesn’t exactly match up with what’s happening in Storybrooke, indicating that there are more secrets that must come out to understand the tale.

The “monster” is the Snow Queen (Elizabeth Mitchell). Trapped in an urn, locked in a cave, she is accidentally freed by Hans (Tyler Jacob Moore, Shameless) as he attempts to capture Elsa (Georgina Haig) and steal her kingdom. Once she is freed, it is Hans that is in trouble, and Elsa looks to have a new mentor in the woman that claims to be her aunt.

Yet, in Storybrooke, the Snow Queen isn’t so benevolent. She has attacked Marian for unknown reasons, and tells Elsa that Elsa was locked in an urn by Anna and that the Rock Trolls erased Elsa’s memory. Elsa can’t believe Anna would entrap her in such a way, and is confused by what has been supposedly removed from her brain, kicking off a whole new set of mysteries.

This is a pretty compelling narrative, two sisters on their own quests, long separated, beset by challenges. They will surely find their way back to one another because fairy tales have happy endings (usually), but it’s clearly not going to be easy, and the fall run of ONCE UPON A TIME will document that.

We are also briefly introduced to new main character Will Scarlet (Michael Socha), a.k.a. The Knave. We don’t know why he’s come over from Wonderland (he starred in the short-lived spin-off of this series) or gone back to his thieving ways, but his introduction is a fun one, and I look forward to hearing why he isn’t still with the Red Queen, who should be by his side, and hopefully will be again.

Some fans of the series are sure to be disappointed by “Rocky Road” and the episodes surrounding it because of how heavily it leans on the guest characters. Elsa and the Snow Queen aren’t part of the core cast, and by focusing on them so much, it gives the more familiar people less screen time. Personally, while I would like to get back to some of the larger arcs that seem to move so slowly, I am enjoying this Frozen tale, and I think the recent hours are good enough that I don’t have much reason to complain, at least not about story structure.

After all, there’s still development for most of the main cast. Emma (Jennifer Morrison) uses her powers to good effect in “Rocky Road,” and she finally confesses to Hook (Colin O’Donoghue) why she’s keeping him at arm’s length. It’s not him, of course, it’s that every man she gets close to winds up dead, which sort of backs up what Elsa tells Hook, that responsibility trumps personal feelings. And we see Mary Margaret (Ginnifer Goodwin) adjusting to motherhood and a mayorship, two tough challenges that she honestly should be doing better with, but she’s getting there. Her story is a little lame (Mysteries of Laura style), but at least she has something to do, which isn’t always the case.

Best of all, there is movement on both of Regina’s (Lana Parrilla) fronts. First, she teams up with a willing Henry (Jared Gilmore) to find the author of the storybook so she can get a happy ending. It’s cool to see how amazed she is when Henry jumps at the chance to help her, and it’s nice knowing he’ll make sure she doesn’t turn back to the dark side to get what she wants. He anchors her to her heart, and she doesn’t deserve to backslide after coming so far. Robin Hood (Sean Maguire) also admits to Regina he’s still in love with her but just can’t be with her, which does seem to soften Regina’s bitterness, just a little. Let’s hope Robin comes clean with Marian that it just isn’t working between them anymore, which could, but probably won’t, create a new villain.

How weird is it that Regina removes Marian’s heart? I have no idea what the implications of this will be, but I dig the twist.

I don’t like a couple of things going on this season. I still hate how Rumple (Robert Carlyle) has slipped back into his shameful ways, and I really don’t like that Hook is covering for him, though I’m sure Hook just sees it as none of his business. It also doesn’t feel right that Granny (Beverly Elliott), Grumpy (Lee Arenberg), and the other townsfolk should turn so cruelly on Mary Margaret. They’ve been through so much together; they should be more understanding, and it seems out of character that they are not.

Fans of Marvel might also have caught the Thor and Avengers comic books Regina gives Henry. It’s a shameless bit of cross promotion, but nothing new for ONCE UPON A TIME. At least it’s worked into the story nicely, the illustrated tales being compared to Henry’s storybook. Any chance there might one day by an Agents of S.H.I.E.L.D. / ONCE UPON A TIME crossover event? It would be incredibly hard to do correctly, so I’m guessing not, even though it could be awesome.

“Rocky Road” isn’t the best episode because it doesn’t have a lot that makes it stand on its own. But I did find it enjoyable, and it planted the seeds for what I assume will be some neat things coming up. For that reason, it works.