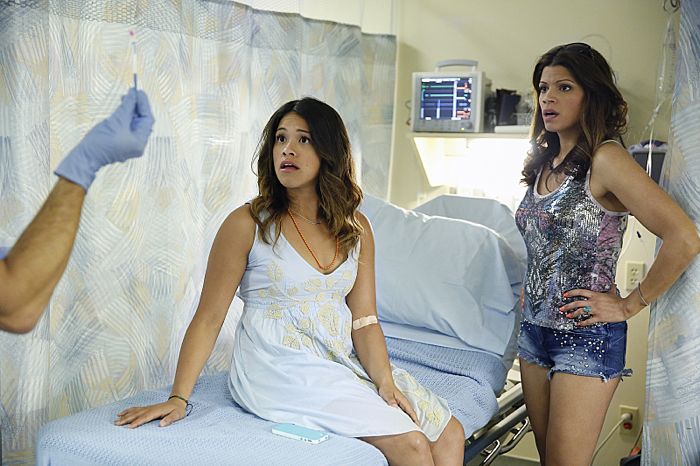 The CW’s JANE THE VIRGIN doesn’t feel like a CW show at all. That’s a good thing. As much as I enjoy some of that network’s fare, they typically schedule a relatively narrow type of series, with only a handful of variations. JANE THE VIRGIN, on the other hand, isn’t about teen drama or superheroes. It’s about a good woman who follows the rules and loves telenovelas, whose life, through no fault of her own, suddenly turns into a telenovela. For those who are still missing Ugly Betty, its successor has finally arrived.

Jane (Gina Rodriguez, The Bold and the Beautiful), who is, as the title suggests, a virgin, has her life on track. She works at a hotel while studying to become a teacher. She has a steady boyfriend, Michael (Brett Dier, Ravenswood), who has a respectable job as a cop, and who has agreed to wait until marriage to have sex with her. She lives with her loving mother, Xo (Andrea Navedo, Law & Order), and equally loving grandmother, Alba (Ivonne Coll, Switched at Birth). She is happy.

Then, one day, everything changes for her. Her doctor, despondent over catching her wife cheating on her, accidentally artificially inseminates Jane. The sperm belongs to the doctor’s brother, who happens to be Jane’s boss, Rafael (Justin Baldoni, Everwood), whom she had (has?) a crush on. Rafael is in an unhappy marriage with a seemingly-supportive wife, Petra (Yael Grobglas), whom sees a baby as a way to make it through five years of marriage so she can collect on her pre-nu payout. Rafael had cancer, and cannot father a child naturally, thus the frozen sperm. Plus, Jane’s father, Rogelio (Jaime Camil, Que pobres tan ricos), a soap opera star she has never met, now wants to be in her life.

All of that is a bunch of soapy goodness that makes for some delicious drama. There are a lot of twists and turns in there, which account for just the pilot alone, and I don’t even mention close to everything that happens. Somehow, the writers find a way to make it all make sense. That’s not to say JANE THE VIRGIN is 100% believable, but the coincidences that make the plot possible are all in place and work together in a way that the story doesn’t have obvious holes or anything that requires further explanation.

In you’re intimidated by jumping into a pool that deep, don’t worry. JANE THE VIRGIN begins by introducing you to all of the characters in a very fact-based manner, telling you who they are and tossing up their passions on screen, with text and narration. In this way, it’s easy to digest what is going on and who the various players are. It’s smart, and done with a touch of whimsy that makes it feel colorful and enjoyable, rather than hokey.

The acting is across-the-board convincing. Again, not all of the characters are realistic portraits of individuals, but those in the roles commit and sell their parts. Petra is more evil than the average gold digger, but Grobglas makes her wickedness somehow fun, and while you want her to fail, you appreciate the way in which the character has been shaped. When a twist late in the episode reveals something surprising about Xo and Alba, the women in the parts help viewers understand why the truth is what it is, and you’ll come away impressed with their performances and the material.

In a fall consisting mostly of lackluster pilots, JANE THE VIRGIN stands out as something entertaining and with a decent quality. It’s not the type of thing that will have gravitas and attract A-listers, but it is a series sure to have a loyal following and, should it stay consistent, possibly tap into the public consciousness, or even, maybe, some award nominations. It’s quite good.

JANE THE VIRGIN premieres Monday, October 13th at 9 p.m. ET on the CW.