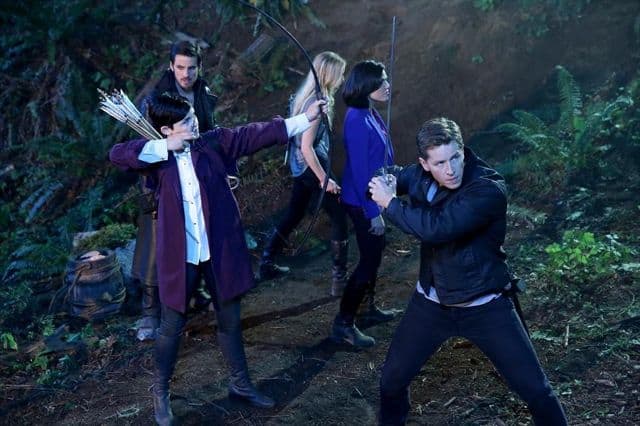 This week’s ONCE UPON A TIME is called “Lost Girl,” and unlike other episodes, the action is kept solidly in Neverland, with neither the Enchanted Forest nor Storybrooke glimpsed in the present timeline. We do get flashbacks to the E.F., but those are in the past, and meant to echo the journey our hero faces in the main thread. The rumors are correct, Neverland is dangerous and dark. Will our beloved characters make it through the woods intact?

The challenge of “Lost Girl” is finding oneself. Emma (Jennifer Morrison) is the titular Lost Girl, having been an orphan who, even after finding her parents as an adult, doesn’t understand where she fits in the world, feeling lonely and adrift. Peter Pan (Robbie Kay) asks her to face that part of herself this week in order to complete her quest to find Henry (Jared Gilmore).

The main relationship Emma must examine to find this missing element is that between her and her parents, Snow (Ginnifer Goodwin) and Charming (Josh Dallas). Early in the episode, Snow tells Emma she can should feel free to call her “Mom,” but that doesn’t go over very well with Emma. This, despite the fact that Snow acts more mom-like to Emma in “Lost Girl” than I think we’ve ever seen her before, actually seemingly wise beyond the young age she appears. It isn’t until late in the hour, though, when Snow prompts Emma to explain an action, that Emma lets loose and admits the hole in her heart.

This is a vital part of Emma that has been glossed for most of ONCE UPON A TIME’s run. We know that Snow and Charming sent Emma out into the world alone, effectively leaving her an orphan. But we rarely see the effect that their actions have had on Emma, who puts up a brave, bold front. In “Lost Girl,” Emma has to face those unresolved issues, causing further rift between the family, though opening up the possibility of healing, now that the cards are on the table.

One must assume Pan is cruel to Emma because Emma abandoned Henry, and so Pan knows Emma is someone who created an orphan. Being one himself, Pan is protective and soft-hearted towards those without parents, and even though that category describes Emma, the fact that she perpetuated the trend means she cannot be part of Pan’s gang.

Hook (Colin O’Donoghue) tells Emma that Pan is one of the most dangerous villains in any realm, and this episode backs up Hook’s claim. Pan is playing a game with Emma, true, but he is far from playful. When Emma allows Regina (Lana Parrilla) to cheat Pan’s rules, Pan reacts by attacking, and only calls off his boys after Charming is infected with a poison. This shows not only is Pan cruel, he is without mercy, punishing any infraction severely.

Of course, Charming hides his deadly injury from everyone, but that’s a story for another episode.

It remains to be seen if Emma can hold her group together long enough to defeat Pan. It’s already cracking, with her strained relationship with her parents and Regina being the outsider. At least Hook is easy-going, following Emma willingly, but that just may be because he wants in her pants. Which might happen, considering Emma relies on him as an ear to talk to, her options being limited.

I do think Emma will rise to the occasion. We see Snow do so in flashback, a tale in which Charming tricks her into thinking she has pulled Excalibur from a stone, giving Snow the confidence to stand up to Regina. There is definitely a strong trend in the family to be a leader who triumphs. Snow and Charming’s time is past, and now it’s Emma’s turn. She will prevail.

Elsewhere in Neverland, Belle (Emilie de Ravin) appears to Rumple (Robert Carlyle) at a crucial time. Rumple is off by himself, and that’s not a good thing. Rumple is often alone while being the Dark One, and it seems he needs loved ones to make him do the right thing. By himself, he gives into the worst parts of his nature. Here, the vision of Belle reminds him to hang onto the good things, even if she isn’t really there for him.

It’s cool that Rumple has the sense to summon Belle’s visage. This shows a turning point for him, as we never saw Bae appear to him after Rumple’s son fell through the portal. Maybe this Rumple has come too far to backslide into what he was in the Enchanted Forest. If so, he may end up actually being the hero Henry needs him to be.

Other fantastic bits in this episode: Pan psyching Emma out when he says Henry won’t want to go home with her; Hook and Emma sharing rum, the solution to all of life’s problems; Hook threatening Felix (Parker Croft) by reminding the lost boy what Hook did to Rufio, a character not see before in ONCE UPON A TIME, but clearly a reference to the movie Hook; Hook asking about the movie-version of himself, and wondering what a perm is; Grumpy (Lee Arenberg) and the dwarves bonding with Charming; Rumple being clever enough to cut off his own shadow, which he sends to hide the dagger.

The relationships and character exploration in “Lost Girl” are what makes this a top-notch episode. It’s a little sad to be missing other plots, but I guess that’s the trade-off for having the flashbacks, a trade I would gladly make the other choice with. Even so, the writing seems to have gone up another level this year, and the series gets better with each passing season.