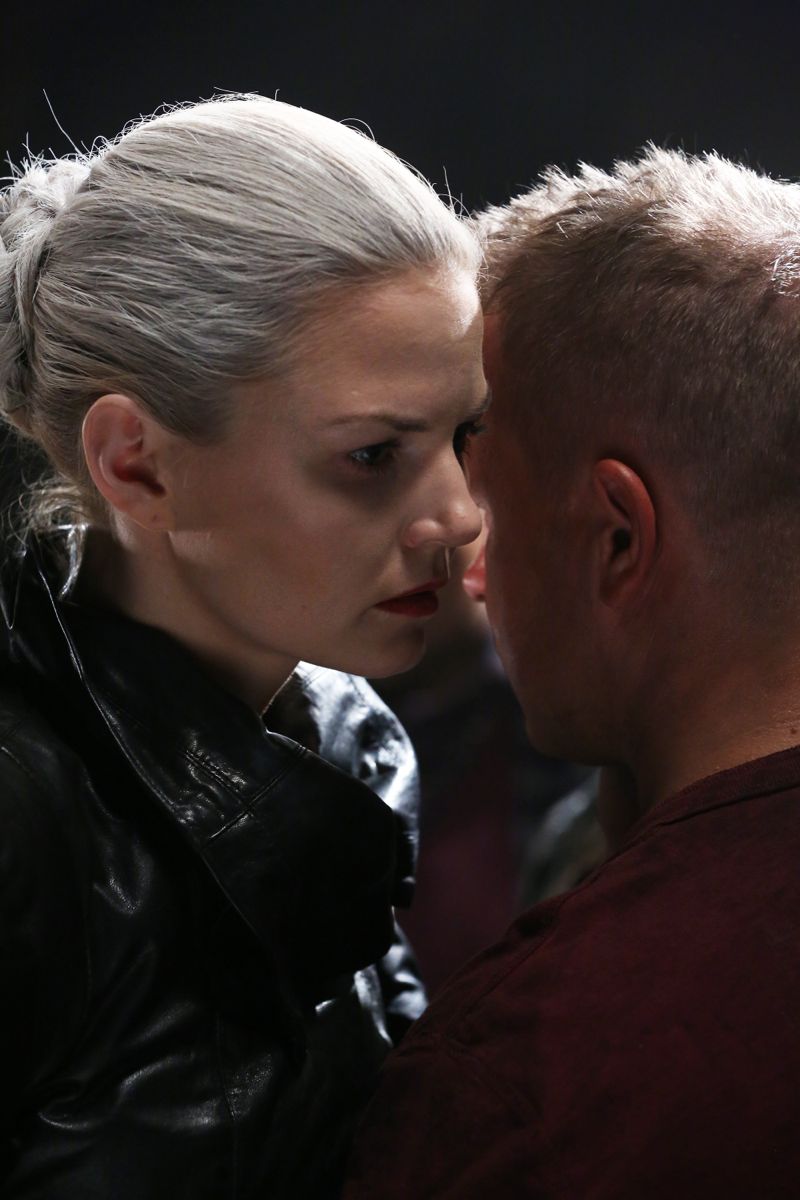 This week’s ONCE UPON A TIME, “Siege Perilous,” finds several characters dealing with sneaky types. David (Josh Dallas) bonds with Arthur (Liam Garrigan) while on a quest, but is the bromance mutual? Emma (Jennifer Morrison) seeks to reignite her relationship with Hook (Colin O’Donoghue), but he’s reluctant to get involved with the Dark One. And Mr. Gold (Robert Carlyle) finds himself facing the darkness once inside of him.

You can tell Jane Espenson wrote this episode because even where the larger arcs don’t quite make sense, she makes it work by getting into the complexity of the characters. I often complain about ONCE UPON A TIME failing to follow through or taking short cuts with stories, and some of that is present in “Siege Perilous.” But Jane, always talented and with an extraordinary strong grasp of the players, seems to reign it in the craziness, remarkably managing to make some of the weak spots gel, and deliver an overall enjoyable episode. Any flaws present are likely not her fault, and the solid performances absolve the cast of wrong-doing, as well.

The story in which David accepts not only a seat at Arthur’s Round Table, but the primary seat, for the knight of purest heart, could easily be hokey. After all, David is a hero who has been through a lot and should see through such a blatant ploy. And the fact that Lancelot (Sinqua Walls), whose rumors of death have been greatly exaggerated, tells Snow Mary Margaret (Ginnifer Goodwin) the truth means that Arthur won’t trick the couple for long, making the ploy meaningless.

However, the way “Siege Perilous” approaches things is to play up David’s best qualities and show he he longs to be something more than just a charming face. This David is insecure as to who he is, so Arthur nudges him perfectly in order to manipulate his emotions. Arthur presents himself as a like-minded individual to David from a similar background, so David assumes Arthur is like him and immediately trusts the king.

All of which makes Arthur a great villain, especially scary as he forces a loyal aide to drink poison. ONCE UPON A TIME hasn’t really targeted David for quite awhile, and by making him the one easily fooled by Arthur, it sets David up to be the hero of the season. I think he can rise to the occasion, and Arthur is a worthy adversary, clearly smart and capable. I’m not sure what is behind Arthur’s motivations, but at least it feels surprising and interesting to have David go up against him. And how about that scene with David in the truck? Pretty cool, eh?

The other bad guy this season is Emma, of course. She tries to pretend she’s not all bad towards Hook. Rumple’s affections for Belle (Emilie de Ravin) always shone through when he was the dark one, so it’s believable that Emma would still want the former pirate.

One might wonder why Hook doesn’t go for Dark One Emma, given his villainous past. The only reason he seems to change is for Emma, so why not change back when she turns? The thing is, though, Hook fell for Savior Emma, not Dark Emma. He knows Savior Emma is in there somewhere and considers her in need of a rescue. In that context, it makes sense for Hook to resist this woman.

The plot in which Emma intends to make Gold pure enough to pull the sword from the stone is very intriguing. Gold has been a poorly-handled character for awhile now, but the removal of the Dark One gives him a chance for a complete reset. For him to become a hero now would not be earned, as it was before his character was ruined, but it could still be a rich way to play him. If nothing else, Belle will finally get the man she deserves, but might she loose interest a bit if Rumple is back to being a coward without an edge?

I am impressed by the way things fall into place in “Siege Perilous.” As I’ve said, I think it would be super easy for certain elements, such as Arthur’s reveal, to not make sense and feel cheap. Yet, in this script, they work, and I came away feeling pretty good about this installment.