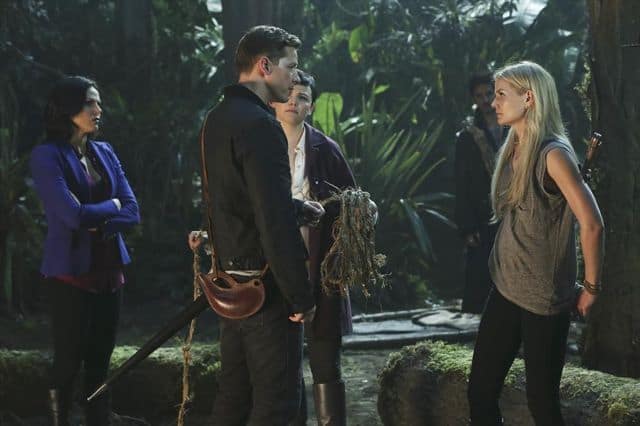 This week’s installment of ABC’s ONCE UPON A TIME, “Good Form,” tells the backstory of Killian Jones, the man who will become Captain Hook (Colin O’Donoghue). Killian first visits Neverland as first mate to his brother on a military ship. But he finds the realm a dangerous place, and the reason he is sent there unsuitable for his moral code. Thus, he embarks on a life as a pirate.

Killian is portrayed as a hero, a noble man who loves his brother and is determined to stand up to a king who would poison his enemies. Is this a hobbling of a legendary villain? ONCE UPON A TIME frequently re-tells familiar stories in a different way, flipping things we believe on their heads. But Hook is introduced last season as a bad guy, so some may be confused by the about face.

But Hook, for as much of a scoundrel as he is, hasn’t really been seen doing anything evil. Yes, he takes Rumple’s wife, but she willingly goes with him. Then, Hook’s revenge mission against Rumple (Robert Carlyle) stems from making Rumple pay for her death. Thus, his misdeeds have been directed at one individual, not the world at large, and with some reason behind them.

Not to mention, Peter Pan (Robbie Kay) is definitely dark and evil in this version of Neverland, so wouldn’t it make sense that his nemesis be the opposite?

It is hard to make the switch mentally, though. We were told Hook was a bad guy, and he even plays to that belief from time to time, so it seems a little strange now. It’s almost as if the writers intended him to be bad, then loved his charm and chemistry with Emma (Jennifer Morrison) so much that they changed their minds. It makes the storytelling uneven, but will please Emma / Hook shippers.

It’s also a little odd how quick Hook’s brand new crew, who don’t have any history or loyalty to him, believes his story and are fine with becoming pirates, turning their backs on their lives. Do none of them have families at home they’re sad about not going back to? I know the storytelling is limited, but this ending rings a bit false.

In the present, Hook is even more heroic than in the past, tricking Charming (Josh Dallas) into being cured of the Nightshade. Hook says he does it for Emma, and he does earn quite the energetic kiss as a reward, however, that’s a lot of effort. More telling will be how Hook deals with learning Neal (Michael Raymond-James) is alive, and if he tells Emma the news or not.

Who does Emma want to be with? She feigns protest at Hook’s advances, but she definitely has feelings for him, at least in the sense of physical attraction, going by the kiss. Even though she loved Neal once, she does feel betrayed by him. Thinking he is dead might be enough to let Emma forgive Neal, but would that last? Neal had noble reasons to leave Emma behind, but will she understand when that is finally all explained? Or might she try out Hook, with whom she does not have a complicated history?

At the moment, Emma’s focus is on rescuing her son, Henry (Jared Gilmore), rather than hooking up, as it should be. She manages to get a message to Henry in “Good Form” to let him know that she’s coming for him. In this, we see the desperate mother doing everything she can to get to her kid.

Henry needs this encouragement. He is losing hope, turning into a Lost Boy. His transformation seems a little quick, but he is just a kid, and is under a lot of peer pressure. I sincerely hope Henry tossing the mirror aside is to protect his mother, and not because he is really falling under Pan’s influence.

In order to make this contact, Emma listens to Regina (Lana Parrilla) over Snow (Ginnifer Goodwin). This means Emma lets Regina get rough with a Lost Boy, taking his heart and controlling him, not exactly a “good guy” thing to do. The result is effective, and Emma is able to reassure Henry, but does it cost her a piece of her soul in the process?

Emma has said that she is the leader on this trip because, not only is Henry her son, but she isn’t sorted in the good or bad sides the other characters are. She can take Regina’s darkness and combine it with Snow’s light to find a solution, using the best of both worlds. The right side doesn’t always win out in Neverland, and they need the balance in order to succeed.

But is Snow right to be upset with Emma? After all, Snow has never failed to win in the end, usually without resorting to treachery. Plus, Snow has tried doing wrong and paid a heavy price for it, mentally and emotionally. She wishes to spare her daughter the same. One must keep in mind, though, that such a price may be worth it if it means the different between life and death for Henry, at least from Emma’s perspective.

I find it very interesting that Emma has taken to calling Henry “our son” in Regina’s presence. Is this a sign that Emma isn’t just allowing Regina to do her thing this one time? Might it be a signal that Emma is choosing the incorrect path overall? Or is she just coming to understand Regina better, seeing why Regina has done some of the things she has done? There’s something more here that will likely be explored in the coming weeks.

Charming also possibly screws up in “Good Form” when he chooses not to tell his family of his upending death, forcing Hook to trick him to save his life. Then, even after Hook manages this, Charming continues to lie, not wanting the girls to know what he covered up. I get that Charming is trying to do right, putting Henry’s welfare before his own, but he should still be honest. Clearly, both Charming and Henry can be saved at the same time. And by not telling Snow or Emma, Charming is hurting them, or it will hurt them if and when they find out. His decision is debatable, but I think he chose wrong.

At the end of “Good Form,” we see Neal in a cage hung next to another cage in a tree by Pan and his Lost Boys. Who is in the other cage? Has Rumple, who does not appear in this episode, been captured, too? Or is another player about to enter the game?

Honestly, I hope it’s the latter. I wouldn’t mind a little more fresh energy tossed in after watching the same characters slog through the jungle a few weeks in a row. ONCE UPON A TIME has not gotten boring, it remains good on a weekly basis, but it is in danger of doing so if it doesn’t start to move things along just a little bit. Introducing someone else to the mix could help with that.