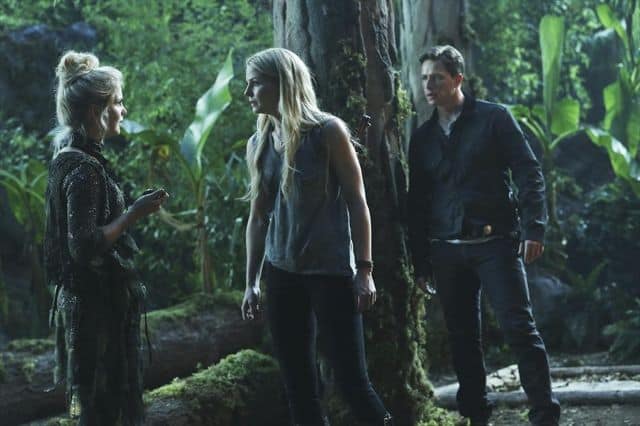 This week’s installment of ONCE UPON A TIME is called “Nasty Habits.” The gang on the island continues to search for Henry (Jared Gilmore), but also realizes that they need to figure out an exit strategy before rushing in. Meanwhile, we see a little more of Rumple (Robert Carlyle) and Bae’s (Dylan Schmid) history with Peter Pan (Robbie Kay), while in the present, Neal and Rumple are reunited.

Here, we learn just a smidgen of the childhood connection that Pan and Rumple share. The series had better show some of the stuff Rumple mentions in “Nasty Habits.” Surely their shared origin story is important? Maybe it’s being saved for down the road, to tie the beginning of Pan to the end? That would make sense.

The timeline of ONCE UPON A TIME isn’t always clear. In “Nasty Habits,” Bae is caught by the Pied Piper (wonderfully tied into the Pan mythology), then taken home by Rumple. This must happen before Bae falls through the magic portal, which takes him to the Darlings, and then eventually to Neverland. So did Pan purposely get Bae at the Darling household?

One thing that makes “Nasty Habits” difficult to digest is that Schmid is so obviously older than in past appearances, in which he plays Bae after these events. I understand that child actors age, and telling a non-linear story means these kind of inconsistencies must be overlooked. However, given the huge growth spurt, I wish some special effects had been used to try to even things out. It’s really disconcerting to try to line these events up with the physical age of the actor being so off.

That aside, it’s a really neat story about Rumple and Bae back in the day. We see yet another crack in the wall of their relationship, which will soon collapse. We see Rumple make wrong decisions to run off his son again. Perhaps we’ve already seen enough that this backstory is unnecessary, yet it’s a timely reminder since it matches so well with the present day thread.

It’s very frustrating that adult Bae, now known as Neal, doesn’t believe Rumple in his nobility. For one thing, during their first encounter, Rumple doesn’t believe Neal is real and reveals his true mission, which is to sacrifice himself for Henry. Neal seems to accept that, but doesn’t think Rumple will maintain that opinion once he gets home to Belle (Emilie de Ravine). Can’t Rumple just point out that he already left Belle to come to Neverland and rescue Henry, thus proving which would win out?

The sad truth is, and I think Rumple realizes that Neal can never trust Rumple, no matter what Rumple says. Neal has been too hurt by his father, betrayed on multiple occasions by his dad’s “Nasty Habits.” Viewers can see that Rumple has changed. We’ve seen his growth and his journey. Neal, on the other hand, hasn’t been around for any of the development, and only has his memories to go on. Those experiences have taught him not to trust Rumple. From Neal’s perspective, he does the right thing.

The one flaw in this is that Neal sets off into the jungle with Henry, leaving Rumple frozen by a spell. We know Neal wants to be a good dad and protect Henry. Leaving Rumple behind is not Henry’s best chance of making it out of Neverland. Is Neal so screwed up by Rumple that he can’t bury their animosity in the name of protecting his son? There would be time to deal with getting away from Rumple later, but Neal needs Rumple now.

Is Neal right about Rumple? The hallucination of Belle finds a less cooperative Rumple after his most recent falling out with his son. Is Neal turning his back on Rumple enough of a reason to make Rumple want to live again? Rumple is willing to die for Henry mainly to honor Neal’s memory. Since Rumple now knows Neal is alive, he will want to repair their bond, which means he may be motivated to put his death on hold. Of course, should Rumple allow Henry to die, it will destroy any hope of a reunion, ever, though Rumple may ignore that, hoping he can still win the long game.

Of course, Pan does retake Henry. The sad thing is, Henry is asleep the whole time he is with Rumple and Neal, and so doesn’t even know he was rescued, however briefly. This is important in Pan’s game of breaking down Henry’s hope and becoming the guy Henry relies on, but it’s also regrettable because that love Henry’s father and grandfather have for him are his biggest defensive weapons, and he misses an opportunity to rearm himself. Instead, Pan begins to win. For now.

The only question I have here is, why does the sleeping spell last longer on Henry than it does on the Lost Boys? Does Pan use his magic to revive his followers?

Oh, and if Henry is the Truest Believer, as we’ve seen him be and as Pan thinks he is, why does Henry give up on his family so easily? Henry isn’t perfect, of course, and no one is saying he wouldn’t eventually be swayed. It just seems a little too quick and a little too neat for Pan to gain this foothold this quickly.

There is some really great stuff in “Nasty Habits” in which Snow (Ginnifer Goodwin) laments that she doesn’t know how to be a mother to Emma (Jennifer Morrison). This is interesting because thus far the focus has just been on how they can relate to one another. Now we see some practical implications of the lost years between parent and child, as Snow never got to figure out the things a mom discovers while raising a kid. In this, Snow is still a newbie.

As Charming (Josh Dallas) tries to comfort Snow, a startling turn sends him reeling. Snow admits to understanding Emma’s pain over losing Neal (they don’t know he’s alive) because she couldn’t go on without Charming. It is plain during Charming and Hook’s (Colin O’Donoghue) earlier conversation about Charming’s slowly-happening-death that Charming assumes Snow will be fine. Now, he looks at her differently. One has to wonder if this will shake Charming and make him play his hand in another way. He isn’t going to want to leave Snow lost; that would go against his hero grain.

With all of this wonderful character development, “Nasty Habits” is definitely a great installment. The game Pan is playing doesn’t really move forward, and the good guys are stalled in their progress, yet it’s how they face these setbacks and troubles that prove who they really are. It’s a wonderful episode for many players.

Next week: the origin of Captain Hook!