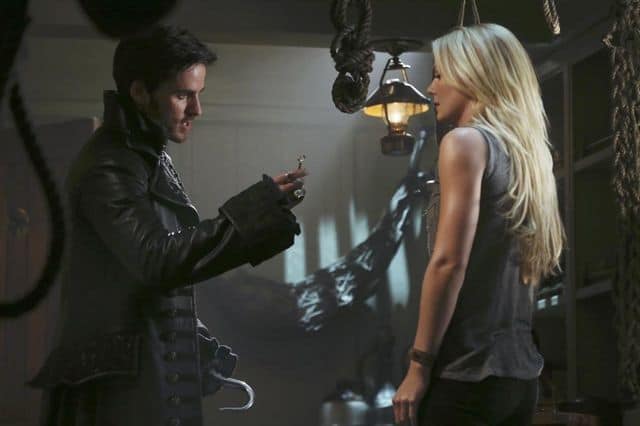 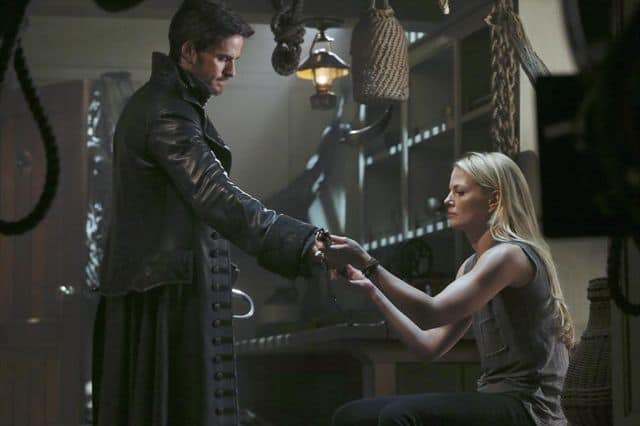 ABC’s ONCE UPON A TIME returns for a third go-round with “The Heart of the Truest Believer.” Six people are on the Jolly Roger, come to Neverland to find the missing Henry (Jared Gilmore). But when they get there, they discover Neverland is not quite what they expect. This goes double for the duo that kidnapped Henry, soon learning the Home Office hasn’t been entirely truthful with them.

The Home Office is, apparently, Peter Pan (Robbie Kay) and the Lost Boys. Pan needs “The Heart of the Truest Believer” for some unknown purpose, and for anyone who has ever watched even a little bit ONCE UPON A TIME, you will know immediately that said heart belongs to Henry. Henry has always held the faith that fairy tales are true and good win will, even when others falter. Now the question is, can Henry keep his heart in his chest, and what does Pan want with it?

The twist in “The Heart of the Truest Believer” is a pretty predictable one. Given the nature of the Neverland jungle and the ease at which the boys move around in it, I assumed immediately that the “turned” lost boy was none other than Pan. I wasn’t sure about his motives, but it makes sense that Pan would want to confirm Henry really is whom Pan is seeking before doing anything more to the boy.

I’m surprised to see Greg (Ethan Embry) and Tamara (Sonequa Martin-Green) meet their fates so swiftly. True, Martin-Green has a full-time gig on The Walking Dead, but considering that the pair were the villains for much of season two, one expects there to be more to their tale than being cut down by boys in the woods. However, ONCE UPON A TIME is moving into a new chapter, so I suppose it’s appropriate that the bad guys are new, too. Plus, I like the way this episode ties into last year and makes the viewer rethink things seen previously.

Actually, the Lost Boys don’t straight up kill Tamara; she hangs around just long enough for Rumple (Robert Carlyle), who has magically left the Jolly Roger, to find her and extract a little information. This is the cruel side of Rumple, returned in full force. We see that Rumple is determined to save Henry at the end of last season, willing to sacrifice himself, but apparently he doesn’t mind dipping back into his old bag of tricks to do, as reformed as her might have seemed.

Neverland seems the perfect place for Rumple, extremely well versed as he is in all things magic. Neverland is bursting at the seams with magic, much more so than the Enchanted Forrest, so it makes sense that the character who flourished with the element should have better command of it than the others. This prompts Rumple to ditch them, whether that’s because he thinks they’ll slow him down or he just doesn’t care about them, he’s at home here.

But Rumple has a weakness, too, and that’s his family. An old straw doll is enough to stop him in his tracks and bring him to tears. We don’t know why, as “The Heart of the Truest Believer” breaks format and abstains from doing a full flashback story, but assumedly we’ll get to that soon enough, and Rumple has been to Neverland before.

Of course, this weakness leads Rumple to dabble in blood magic, which provides a way for Neal (Michael Raymond-James), stuck in the Enchanted Forrest with Mulan (Jamie Chung) and Robin Hood (Sean Maguire, recast from Robin’s previous appearance), to locate Emma. He’ll need more help than just them, and Aurora (Sarah Bloger) and Phillip (Julian Morris), to reunite with his loved ones.

I like very much that Neal’s assistance comes in the form of familiar faces. These characters were seen quite a bit early last season, then disappeared. ONCE UPON A TIME does have quite a few people to serve, but it’s satisfying that it’s beginning to reuse those that haven’t been fully explored, rather than just continuing to add new ones all the time. The quartet Neal gets involved with deserve the screen time, and I look forward to seeing how they can help him next, as well as to how long they will stick around this time.

The more help Neal can bring with the better, as Neverland is full of dangers, a reflection of the erratic children who run the land, left to their own devices without guidance or structure, which Emma, Snow (Ginnifer Goodwin), Charming (Josh Dallas), Hook (Colin O’Donoghue), and Regina (Lana Parrilla) soon find out. They are beset by mermaids and drive them off, only to be further threatened by their hostage (Natasha Wilson) with a rough storm. It’s too bad Rumple leaves them, as they could sure use his help!

It’s really cool how the storm is mirroring the discord within this group, feeding off of them and ramping up their hostility at the same time. It may be an obvious metaphor, but it’s an effective one, making for a tense scene.

Emma is the one that saves the day. In all of this, Emma has remained the most neutral, and she is able to do that because she exits outside of the Enchanted Forrest web of relationships, not having lived in that place. Emma and Charming want to be her parents, and so love her as mothers and fathers do, but not having grown up with them, Emma is hesitant to let them in, still holding onto anger towards them. Emma saves Regina so Regina respects her, but they feud over Henry, so they won’t be buddies anytime soon. And Hook takes a fancy to Emma, even giving her Neal’s sword, but Emma isn’t about to hop into bed with a known scalawag.

When Emma jumps in the ocean, though, they all work together to save her. I think they realize that Emma is their best chance at getting what they want, whether it’s family or sex or a way to get back to one’s world. Emma is a powerful force, as is Henry, and they are driving factors in this show.

The one flashback we do see is Emma (Jennifer Morrison) giving birth to Henry. It’s telling that this moment is chosen, as the episode is not about Emma’s relationship with Henry. I believe this means Henry’s origin story and how he came to Storybrooke, as well as what his destiny is, it vital to the plot this fall.

“The Heart of the Truest Believer” isn’t just an exciting story and the beginning of fresh plots in a new world; it’s also reestablishing the role both Emma and Henry play in the show, as leads. It reorders the relationships, Emma taking command over the other four on the ship. It reminds us of what the show is about and why it works in the first place. In short, it’s pretty much the best season premiere one could ask for from the show.