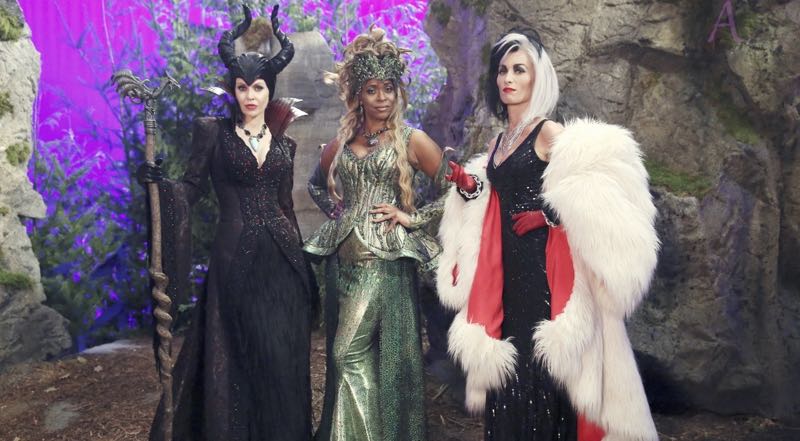 In the ONCE UPON A TIME world, there is never such a thing as too many villains — especially when they all have a history of being partners in crime.  In the upcoming episode “Darkness on the Edge of Town,” ONCE UPON A TIME sets up its big story arc involving the classic Disney villainesses: Ursula (Merrin Dungey), the Sea Witch from “The Little Mermaid,” Malificent (Kristin Bauer Van Straten) from “Sleeping Beauty,” and Cruella De Vil (Victoria Smurfit) from “101 Dalmations.”  As Rumpelstitlskin aka Mr. Gold (Robert Carlyle) sets his plan in motion to regain his powers and perhaps win the heart of Belle (Emilie de Ravin) once again, he enlists the aid of his former cohorts as he knows exactly what each villain truly wants:  their happy ending.

Interesting, it seems like the heroes and villains have similar goals for the rest of this season — each wants to find the author of Henry’s book.  It seems like whatever the author writes comes true and that is a powerful magic:  the ability to give a person a happy ending.  So while Gold is on the hunt for allies to find a way to return to Storybrooke and pursue his happy ending, Regina (Lana Parrilla) has made it her mission to find the book’s author first.  After all, she gave up her chance at happiness by letting Robin (Sean Maguire) go with his wife and son; whereas, Gold threw his chance at happiness away by lying to and tricking Belle into thinking he had given up his dark ways.  Weighing the scales, it would seem that Regina is the more deserving.  But can she win the race to find the book’s author before Gold does?

Fortunately, Gold is stuck outside of Storybrooke and scrambling for a way to return.  Regina has it a bit easier having free reign to search throughout Storybrooke and with the aid of Emma (Jennifer Morrison), Henry (Jared Gilmore), Hook (Colin O’Donoghue), David (Josh Dallas) and Mary-Margaret (Ginnifer Goodwin).  But shudder to imagine just how much damage Gold could do if he were to find a way to return — especially if no one knew it.  The saying is forewarned is forearmed.  And with our heroes thinking Gold is no longer a threat after they stripped him of his powers and banished him from Storybrooke only means they are not ready for what happens next.

So while Hook and Emma are giving their blossoming romance a shot (finally) and enjoying their blissful time together arm-in-arm and hand-in-hand and perhaps with a kiss or two on the side, one can sense that their happiness has lulled them into a false sense of security.

When there are villains out there in the world, even in the world outside of Storybrooke, it is foolish to imagine that evil is not constantly knocking at their door.  Even Mary-Margaret and David cannot quite shake the feeling that they are enjoying the calm before the storm.  They know from their own past that just when you think all is safe and calm, that is when your enemy chooses to strike.

Regina is similarly cautious about the future.  Every time she has glimpsed her own happiness, it has been horribly and tragically torn away from her.  But she is a powerful woman with strong resources and allies supporting her and it is tempting to believe that with the heroes finally on her side that she should not get exactly what her heart desires.

In the tug-of-war for happy endings, it seems more likely that Regina’s desire and passion to win will outweigh and conquer Gold’s thirst for power and his own happiness.  But that is the ultimate battle of this season:  the race to secure their happy endings.  What will it take to get the edge of the other?  Gold is assembling his forces of evil to tip the scales in his favor, and all those Queens of Darkness do seem as motivated and have their own dark magic on their side.  Will Regina aligned with Emma be enough, or will they have to seek out additional magical allies of their own in the coming war?

Just who is the sorcerer who owned the house that they found the blank books?  That mystery and where to find him is definitely on the top of everyone’s list as the countdown to battle commences.

This is the time to start thinking of all the possibilities of who might be their greatest ally and hope and pray that Regina and Emma find him/her before Gold’s nefarious plan is fully unleashed.

To see just what Gold has in store for everyone, be sure to tune in for the return of ONCE UPON A TIME on Sunday, March 1st at 8:00 p.m. on ABC.  (Also, in the March 8th episode, entitled “Unforgiven,” two big secrets come to light and those will shock everyone. Consider yourself warned!)