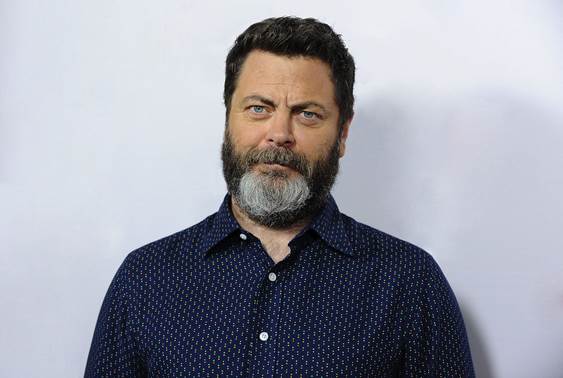 When investigating a serial killer, Jake (Andy Samberg) enlists Holt’s (Andre Braugher) help in an attempt to solve the case off the radar. At the precinct, Rosa (Stephanie Beatriz) and Amy (Melissa Fumero) are forced to deal with The Vulture’s (guest star Dean Winters) demands, and Terry (Terry Crews) discovers a new obsession in the all-new “The Oolong Slayer” episode of BROOKLYN NINE-NINE airing Sunday, Oct. 18 (8:30-9:00 PM ET/PT) on FOX.

Nick Offerman Bio: Nick Offerman is best known for the role of “Ron Swanson” on the hit comedy series “Parks & Recreation.” For his work on the show, Offerman won a Television Critics Association Award for Achievement in Comedy in 2011. He also received two Critics’ Choice Television Award nominations for Best Supporting Actor in a Comedy Series. Offerman was recently seen in the films “A Walk in the Woods,” “Me and Earl and the Dying Girl,” and lent his voice to “Hotel Transylvania 2.” He also appeared in “Fargo” and recently wrapped production on the film “The Founder.”