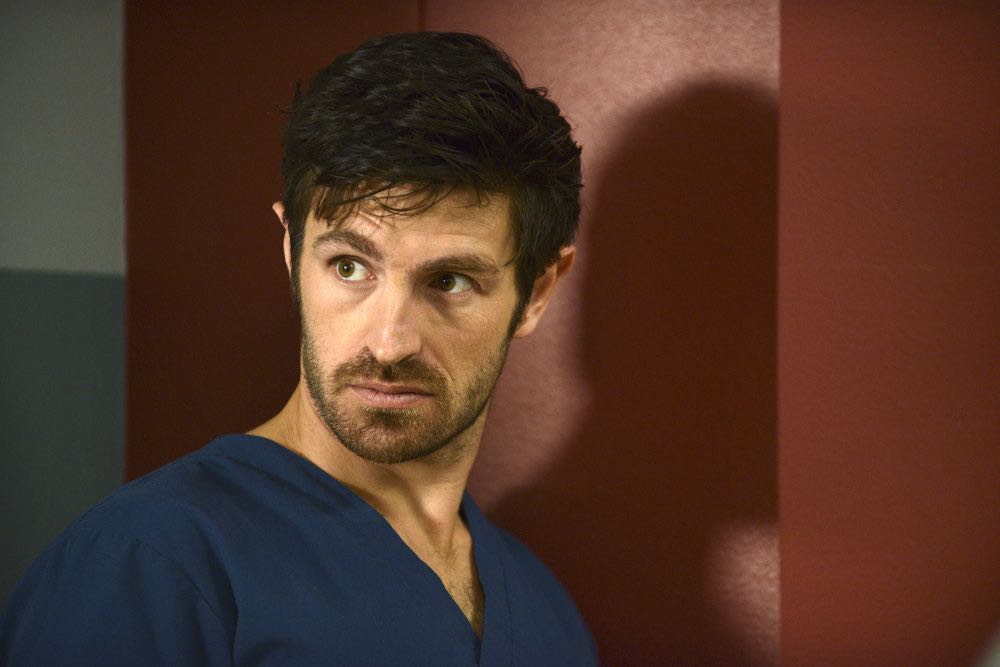 Building on the momentum of another highly successful season in which NBC once again ranks #1 in adults 18-49, the network has announced the rollout of an ambitious summer schedule that includes the premiere of new dance competition series “World of Dance” with judges Jennifer Lopez, Derek Hough, NE-YO and host/mentor Jenna Dewan Tatum; the return of the #1 show of summer, “America’s Got Talent,” with new host Tyra Banks; and the network’s obstacle course sensation, “American Ninja Warrior.”

Making their debuts on the scripted side are “Midnight, Texas,” based on the New York Times best-selling book series by Charlaine Harris (author of the novels that inspired “True Blood”), and “Marlon,” a family comedy loosely inspired by the real life of star Marlon Wayans.

Returning for their third and fourth seasons, respectively, are critical fave “The Carmichael Show” and edge-of-your-seat medical drama “The Night Shift.”

In partnership with preeminent global dance brand World of Dance, the series brings the world’s elite dancers together to compete in epic battles of artistry, precision and athleticism for a life-altering prize of $1 million. Solo dancers will compete against duos and crews in an unlimited range of dance including hip-hop, popping, locking, tap, ballet, break dancing, ballroom, stomping and more.

Jennifer Lopez, NE-YO and Derek Hough will be at the judges table with Jenna Dewan Tatum set as host/mentor.

Handpicked from qualifying events around the nation and thousands of online submissions, competitors are divided into three divisions: Junior (any size act, 17 years old and under), Upper (groups of 1- 4, 18 and older) and Team (groups of 5+, 18 and older). Our panel of experts score the acts using a precise point system developed by World of Dance, using the following criteria: Performance, Technique, Choreography, Creativity and Presentation. The competition consists of five rounds: Qualifiers, Duels, The Cut, Divisional Final and the World Final. In the first four rounds, dancers only compete within their division, but in the World Final – the winner from each division will compete against each other for the grand prize of $1 million and the title “Best in the World.”

Following the show’s most viewed season in five years where the finale came down to 13-year-old singing sensation Grace VanderWaal winning over spellbinding illusionist duo The Clairvoyants, “America’s Got Talent” is back for its 12th season with creator and judge Simon Cowell, Mel B, Heidi Klum and Howie Mandel, as well as new host Tyra Banks.

“America’s Got Talent” has reigned as television’s #1 most-watched summer alternative series for each of its 11 seasons on the air and last summer surged to its highest adult 18-49 average (a 3.0 rating) in three years and most-watched season (13.5 million viewers) in five years.

Inspired by the life of comedian Jerrod Carmichael, the series follows Jerrod and his opinionated North Carolina family as they navigate topics that all families face in America today. Jerrod often finds himself debating such issues with his old-school father, Joe (David Alan Grier); his devoutly religious mother, Cynthia (Loretta Devine); his fianc&ecaute;e, Maxine (Amber Stevens West); his social media-loving brother, Bobby (Lil Rel Howery); and Bobby’s outspoken almost-ex-wife, Nekeisha (Tiffany Haddish). And somewhere in the middle of all of their disagreeing is the heart of this family.

The Emmy Award-nominated “American Ninja Warrior” returns for its sixth full season on NBC. Matt Iseman is back as host, along with Akbar Gbajabiamila and co-host Kristine Leahy.

The action-packed series follows competitors as they tackle a series of challenging obstacle courses in both city qualifying and city finals rounds across the country. Those that successfully complete the finals course in their designated region move on to the national finals round in Las Vegas, where they face a stunning four-stage course modeled after the famed Mt. Midoriyama course in Japan. The winner will take home a grand prize of $1 million.

Last year “American Ninja Warrior” delivered its most-watched season ever, averaging 7.2 million viewers, and was a top-10 summer series among primetime programs on the Big 4 networks in every key ratings measure.

Inspired by Spartan Race – the creators of the world’s most demanding obstacle course races – “Spartan: Ultimate Team Challenge” raises the bar on team competitions. Groups of friends, families, co-workers and more must work together to test their determination, endurance and will. Teams of five will compete on one the most demanding courses ever devised and will have to push through the pain to win $250,000.

In its first season last year, “Spartan: Ultimate Team Challenge” averaged a 1.3 rating, 5 share in adults 18-49 and 4.2 million viewers overall and delivered a strong upscale audience, indexing at a 118 among adults 18-49 living in homes with $100K+ incomes (with 100 representing an average concentration of those homes).

Following up on the phenomenal success of “Little Big Shots,” in which kids brought their amazing talents to a primetime audience, “Little Big Shots: Forever Young” is where young-at-heart seniors will showcase their hidden talents, vibrant personalities and incredible wisdom.

The comedy/variety series, from Warner Horizon Television, will be executive produced by Ellen DeGeneres and series host Steve Harvey.

As the #1 new series last season among total viewers and the most watched new alterative show in six years, “Little Big Shots” showcased the talent and comedy of the very young. Now the spotlight turns to America’s seniors, where Harvey will showcase undiscovered rare talents and hysterical encounters with musicians, singers, dancers and every form of “elderkind” in the country. With many years of experience and wisdom, these seniors are sure to delight the audience with their strong opinions, incredible talent, and heartwarming stories.

With more than $12 million on the line every night, and up to $3 million on a drop at four-stories high, “The Wall” was built for one purpose – to change everyday people’s lives in an instant.

Hosted and executive produced by actor, comedian, author and TV personality Chris Hardwick, “The Wall” offers a pair of deserving teammates life-altering cash prizes. The rules are simple: Get a question correct and a green ball will fall down the wall and add the value of the slot to the players’ winning total. Miss a question and an ominous red ball will fall and deduct the value from the team. Teammates have to work together to build a huge cash prize.

Since debuting earlier this winter, “The Wall” has averaged a 1.7 rating in adults 18-49 and 6.7 million viewers overall, making it the second-biggest in-season alternative hit on the Big 4 networks in the last five years in total viewers, behind only “Little Big Shots.”

Doctors, nurses and the medical staff at San Antonio Memorial Hospital will be busier than ever during the fourth season of the fast-paced medical drama “The Night Shift.”

Last summer “The Night Shift” averaged a 1.4 rating, 5 share in adults 18-49 and 6.8 million viewers overall in “live plus seven day” averages, making it the #1 summer drama on the big 4 networks.

Based on the best-selling book series by Charlaine Harris (author of the novels that inspired “True Blood”), “Midnight, Texas” stars François Arnaud (“The Borgias”) as Manfred, a charming, powerful psychic who can communicate with spirits and finds safety in Midnight surrounding himself with both human and supernatural allies. Midnight is also home to Bobo, proprietor of Midnight’s local pawn shop (Dylan Bruce, “Orphan Black”); Fiji, a witch who owns the local wiccan shop (Parisa Fitz-Henley, “Luke Cage”); Olivia, a mysterious assassin with a weapon for every occasion (Arielle Kebbel, “The Vampire Diaries”); Joe, an angel who knows all of Midnight’s secrets having been around for millennia (Jason Lewis, “Sex and the City”); Lemuel, a wise vampire with a long history in Midnight (Peter Mensah, “True Blood”); Creek, an aspiring writer with big dreams (Sarah Ramos, “Parenthood”); and Rev. Emilio Sheehan, who can’t resist the pull of a full moon (Yul Vazquez, “Captain Phillips”).

“Hollywood Game Night,” hosted by Emmy Award and Golden Globe winner Jane Lynch, returns for a fifth season with celebrities such as Sterling K. Brown, Chrissy Metz and Justin Hartley from “This Is Us,” and Ben Feldman, Lauren Ash and Nico Santos from “Superstore,” as well as Michael Bolton, NE-YO, Natalie Morales, Mike Colter, Chris Hardwick, Margaret Cho, Gabby Douglas, Matt Iseman, Taye Diggs, RuPaul and many more who will join in the fun as they face off in hilarious party games.

In the series, two contestants are transported from their everyday lives into a once-in-a-lifetime night of fun and celebration as they step beyond the velvet rope and rub shoulders with some of their favorite celebrities and compete for the chance to win up to $25,000. This season features new party games and the winning contestant will be able to choose two celebrities to help them win the grand prize.

Weekend Update,” which comments on and satirizes the news and current affairs of the week, has consistently ranked as one of the most popular segments of “Saturday Night Live” throughout the show’s storied 42-year history. Previous “Weekend Update” anchors include Chevy Chase, Dan Aykroyd, Jane Curtin, Dennis Miller, Norm Macdonald, Jimmy Fallon, Tina Fey, Amy Poehler and Seth Meyers.

Loosely inspired by the real life of star Marlon Wayans (“In Living Color,” “Scary Movie”), this update to the classic family comedy centers on a loving (but inappropriate) father committed to co-parenting his two kids with his very-together ex-wife. While his misguided fatherly advice, unstoppable larger-than-life personality and unpredictable Internet superstardom might get in the way sometimes, for Marlon family really always does come first – even if he’s the biggest kid of all.