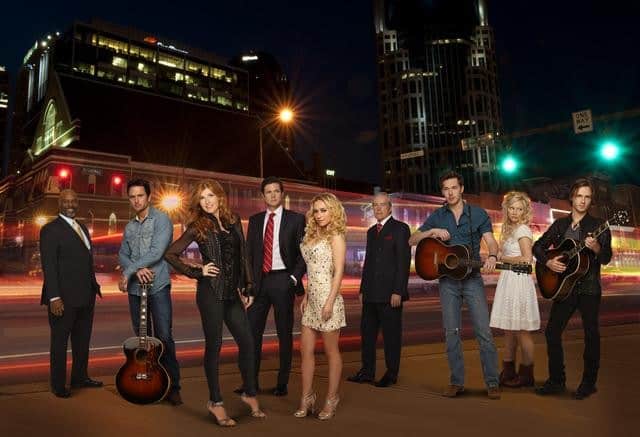 First there was FOX’s Glee. Then NBC’s Smash. Now ABC enters the musical fray, appealing to a different demographic, with NASHVILLE. While Glee mixes showtunes and pop, and Smash goes mostly for original, Broadway-style tunes, NASHVILLE embraces country, both old and new, with an interesting, soapy drama and some decent original music.

The leads are familiar to those the slightest bit familiar with the country music scene and recent films and television portrayals of it. Rayna James (Connie Britton, Friday Night Lights, American Horror Story) is a legend who is past her prime. Whereas before she sold out arenas, now ticket sales are dwindling. Her record label asks her to “co-headline,” really, open, for young sensation Juliette Barnes (Hayden Panettiere, Heroes). Rayna is insulted and refuses, even when record label threatens to drop her.

Is Rayna being unreasonable, a diva, if you will? Well, not completely. She acknowledges and apologizes for her diva moments. She just isn’t ready to admit she’s not as successful as some trampy young starlet who isn’t nearly as good as Rayna. Who can blame her for that?

It’s easy to stay sympathetic for Rayna because Juliette is a mess. Autotuned to correct a weak voice and freely trading carnal relations for favors, Juliette is a picture of everything that’s wrong with modern music and fame, country or otherwise. Even with a drug addict mother (Sylvia Jeffries, Eastbound & Down), thrown in to soften Juliette, it’s still hard to feel sorry for someone who so openly snubs Rayna and tries to steal Rayna’s band leader.

Said band leader, Deacon Claybourne (Charles Esten, Big Love, Enlightened), is the poor sob stuck in the middle. He is in love with Rayna, who is married to another man, and is offered sex and large amounts of money by Juliette to defect. A joint tour could save him the pain of having to choose, but with that looking unlikely by the end of the “Pilot,” he will probably be a source on conflict for the women.

Oh, and Rayna’s controlling and despicable father, Lamar Wyatt (Powers Boothe, Hatfields & McCoys, 24), is convincing her pushover husband, Teddy (Eric Close, Suits, Without a Trace), to run for mayor of Nashville, further complicating her life. This also sets the stage for a possible Deacon / Rayna romance if Teddy goes too far in service to Lamar.

The style of music will set NASHVILLE apart from its peers, but so, too, will the quality and tone. Whereas Smash and Glee might borrow from other sources, or use a limited catalogue, NASHVILLE freely explores different aspects of the genre. While the tunes are new and original for the series, it’s sort of like HBO’s Treme in that it uses the music to capture the spirit of an industry and a town. Whether it’s Juliette’s frothy popular fare, Rayna’s classics, or Scarlett’s (Clare Bowen) poetry that boyfriend Avery (Jonathan Jackson, General Hospital) turns into a new style entirely, there is a soul here that is missing from other television shows.

Add to that, NASHVILLE does the drama well. It’s not as over-the-top as Dallas, but there’s a Southern charm that can disguise snaky backstabbing that really gives flavor to the characters. There is no doubt that varying people have different agendas, and some are willing to be pretty unscrupulous to get what they want. There will be shades of grey, and while some of the villains are obvious, others will probably be created or revealed as the series unfolds, and several will probably straddle the line depending on the circumstances. These are fully developed people here, not just caricatures. Even setting the music aside, it’s a marvelously executed, engaging tale.

Which is why NASHVILLE deserves a watch. Some series can do one thing right, but few juggle multiple elements so deftly. A terrific cast, great music, and wonderful writing combine to make this one of the best new entries into the fall television season. The country aspect may be enough to appeal to many middle Americans, turned off by the specific genre that Glee and Smash fit into. And while it feels familiar enough to be welcome in our homes, it’s also different enough to feel like something new and special. Kudos all around.