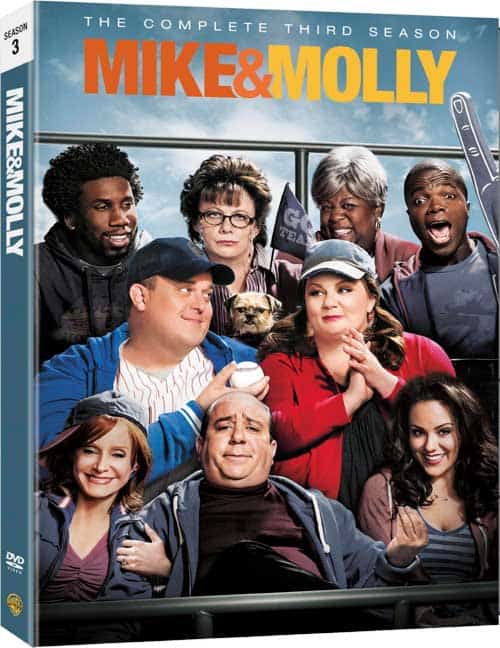 Seat42f and Warner Bros. Home Entertainment have teamed up to give FIVE lucky winners a copy of MIKE & MOLLY Season 3 on DVD. For a chance to win leave a comment below telling us why you want to add MIKE & MOLLY Season 3 to your DVD collection. Only one entry per person. Contest ends August 30th. Winners will be notified on August 31st via email so make sure to use a valid email address when you post your comment.

It’s wedded bliss in the Windy City for one of television’s favorite couples on Mike & Molly: The Complete Third Season, set for release from Warner Bros. Home Entertainment (WBHE) on August 20, 2013. Averaging over 10 million viewers per episode*, the program has solidified itself as a beloved hit.  The DVD set features all 23 hilarious episodes plus a laugh-out-loud gag reel. This must-own releaseis comprised of three DVDs and will retail for $44.98 SRP.

“Melissa and Billy are gifted comedic actors who bring their characters to life with depth and genuine charm. They are an incredibly entertaining pair to watch,” said Rosemary Markson, WBHE Senior Vice President, TV and Special Interest Marketing. She added, “Mike & Molly captures the ups and downs of being in a romantic relationship with such honesty and humor that it’s no wonder the show has brought in so many devoted fans.  We are pleased to bring the third season of this wonderful program to consumers.”

Join newlyweds Mike (Billy Gardell – My Name Is Earl) and Molly (Emmy®-winner Melissa McCarthy – Bridesmaids, Samantha Who?) as they leave their romantic honeymoon in Paris behind and learn to adapt to their new roles as husband and wife. This won’t be an easy task as they return to a house filled with craziness thanks to Molly’s half-baked sister, Victoria, her smart-talking mother, Joyce and Joyce’s lascivious new husband Vince.  Join Mike and Molly in their hilarious journey as they discover the ups and downs of this next chapter of their lives as newlyweds.

Actress Melissa McCarthy won an Emmy® for her role as Molly in 2011 (Outstanding Lead Actress in a Comedy Series), shortly before her Academy Award® nomination for her performance in the hit feature film, Bridesmaids. In addition to McCarthy and Gardell, Mike & Molly’s talented cast includes Reno Wilson (Crank), Katy Mixon (Eastbound & Down), Nyambi