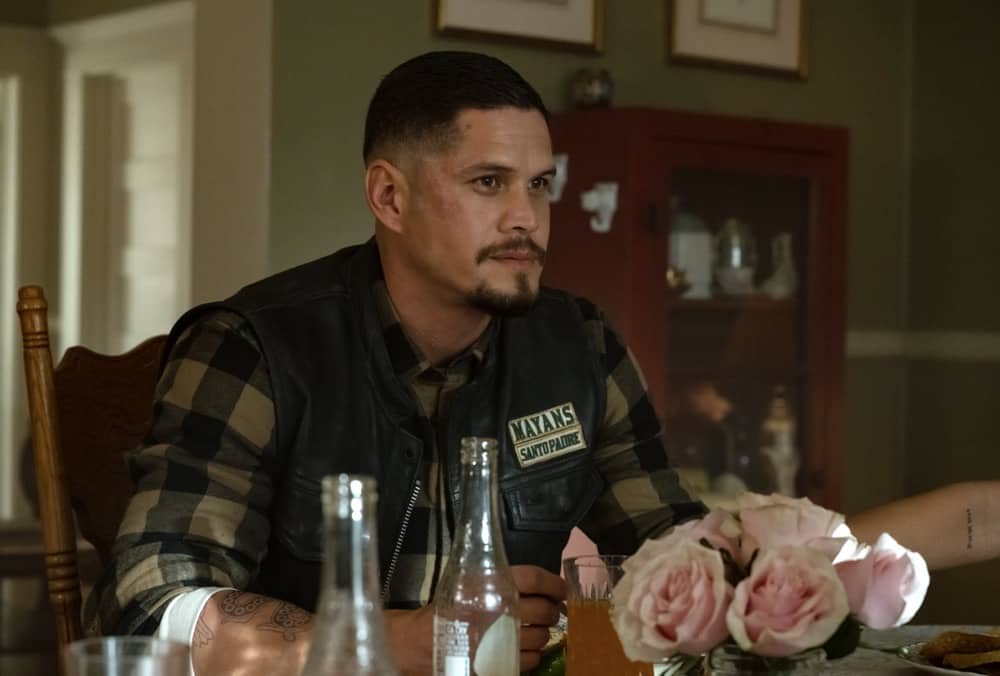 Mayans MC rides on for another season! The biker drama set on the Cali/Mexi border has been renewed for a fourth season on FX, it was announced today by Nick Grad, President, Original Programming, FX Entertainment. The series led by Elgin James, co-creator and executive producer, will return in 2022.

“Elgin James, his creative collaborators, this incredible cast and crew delivered on another epic season of Mayans M.C.,” said Grad. “Through three seasons, Mayans has told stories that resonate well beyond the border where the club thrives and survives, inviting fans inside their world and giving them a seat at the table.”

“I am deeply indebted to everyone at FX and 20th for allowing us to continue to tell the stories of the characters that Kurt and I created and whom our cast and crew took to new heights in season 3,” said James. “In season 4 we look forward to diving deeper into each character’s truths, exploring the danger of the combustible world they inhabit, and for each writer, cast member and crew to stake out our place as storytellers.”

Mayans M.C. continues tomorrow night with the penultimate episode of the third season on Tuesday, May 4 at 10 p.m. ET/PT on FX and streaming the next day on FX on Hulu: “The House of Death Floats By.” The club welcomes a new member. Miguel seeks retribution on his mother’s behalf. Written by Sean Tretta; Directed by Elgin James.

Mayans M.C. follows the life of Ezekiel “EZ” Reyes (JD Pardo), a newly patched member of the Mayans M.C. charter on the Cali/Mexi border. Once the golden boy with the American Dream in his grasp, EZ and his brother Angel (Clayton Cardenas) are closer than ever after uncovering the truth behind their mother’s murder while their father Felipe (Edward James Olmos) struggles to reconcile the choices he and his sons have made.

FX is comprised of the networks FX, FXX and FXM, the video on-demand app FXNOW, and the streaming hub FX on HULU that features exclusive FX series, next day access to current FX and FXX series, and FX Networks’ library of legacy series. FX on Hulu exclusive series include Devs, Mrs. America, A Teacher and the upcoming The Old Man, Y: The Last Man, American Horror Stories and Fleishman is in Trouble. FX, the flagship general entertainment basic cable channel, launched in June of 1994 and is carried in 86 million homes. The diverse schedule features a growing roster of critically-acclaimed and award-winning hit drama series including Pose, Snowfall, Mayans M.C., and Taboo; the critically-acclaimed limited series American Horror Story, Fargo, American Crime Story, FEUD, Black Narcissus and the upcoming Shōgun and Pistol; acclaimed hit comedy series including Atlanta, Better Things, What We Do in the Shadows, Breeders and the upcoming Reservation Dogs; the half-hour series Mr Inbetween, The Choe Show and the Untitled B.J. Novak Project; a slate of docuseries and documentary features, including The New York Times Presents, The Most Dangerous Animal of All, AKA Jane Roe, A Wilderness of Error, Hip Hop Uncovered and Hysterical; and the FX Original Movie A Christmas Carol.

FX is the former home of the critically-acclaimed and award-winning hit drama series The Shield, Nip/Tuck, Rescue Me, Damages, Sons of Anarchy, Justified and The Americans. The network’s library of acquired box-office hit movies is unmatched by any ad-supported television network. FXX, the newest network, launched in September 2013 and is carried in 82 million homes. Geared towards a young adult audience, the schedule features original series, movies, and acquired series. The channel is anchored by the acclaimed hit comedies It’s Always Sunny in Philadelphia, the Emmy® Award-winning comedy series Archer, DAVE and Cake, a weekly showcase of short-form comedy programming. FXX is also the cable home to The Simpsons, the longest-running comedy in TV history. FXM was launched in October of 1994 and is now carried in 57 million homes. Its schedule features classic films during the day (FXM Retro), contemporary box office hits and acclaimed, award-winning films, and short-form award-winning original programming in the evening.