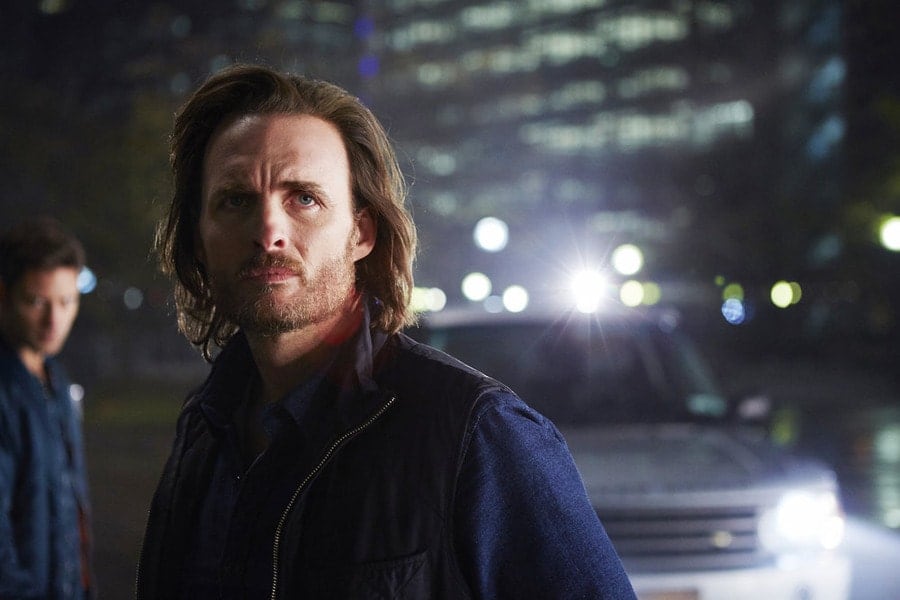 Greg Bryk is like watching a living, breathing poem come to life on screen.  He draws you in and invokes such a complex array of emotions in response to his performance. Whether a white-hat hero or a darkly, tormented villain, Greg makes you feel a real response to his work. It is a form of visual addiction that will surprise you with its cravings.  His role as Grady in MARY KILLS PEOPLE is no less compelling and addictive. Every moment he is on screen you will be riveted.  In an exclusive interview, Greg talks about what attracted him to the the show and the joy with which he embraces his art.

What initially appealed to you about the role of Grady and working on the MARY KILLS PEOPLE?
GREG:  I had been a fan of Tassie and Amy Cameron for awhile and I knew MARY KILLS PEOPLE was their new show. Their involvement, along with Holly Dale’s, really interested me. BITTEN was over, and I was between seasons of FRONTIER when they began casting, so the timing could also work. When I first read Grady’s Kairos and Chronos speech I knew he was my next adventure. After the Cameron’s, Holly, Tara Armstrong and EOne watched my audition, they agreed.

How would you describe who Grady is?
GREG:  Grady is lost and searching, following his footprints into a blizzard of his own making. He’s exceptionally bright and dangerous and playful. He is always seeking the heightened moment, the “awwww.” He tries to make his heaven in the infinity of now, through drugs or love or violence.

What do you most admire and/or like about Grady?
GREG:  I liked Grady’s playfulness and his honesty and his madness. His sense of romance, allowing a glance or touch to become a small miracle, was a revelation to me and the writers. I’m drawn to the damned and their ecstasies. Give me the unhinged and the broken limping towards their salvation every time.

What is it like working with such a strong ensemble cast?
GREG:  The cast for MARY KILLS PEOPLE is extraordinary. I knew and respected Lyric’s work from BOOK OF NEGROES, and Matt from ROOKIE BLUE. I was aware of Jay as well and he is fantastic. Joel is a poet and a beautiful lunatic of the highest order, and Richard and I became kindred spirits, two imps playing with matches and gasoline in our scenes together. My oldest son Dempsey was also in this show. It was his first role, as the bad boy Tristan, and sharing this experience with him was special.

You have a number of scenes with Caroline Dhavernas. What was it like filming the wide range of emotionally-charged scenes with her?
GREG:  Working with Caroline is brilliant. She has an emotional honesty that is simply stunning. I think we worked in, and around the lines, and found bits of light from falling stars to illuminate the secret corners of our hearts. We had a profound and unsettling connection as Grady and Mary. It was thrilling to work with her.

How would you describe the complex relationship of Grady and Mary?
GREG:  My scenes with Caroline are like a dance between two drowning people, ferocious and tinged with dark forevers.

What was the hardest part about working on the show?
GREG:  The subject matter of the show is challenging. I am terrified of dying. Facing that moment by choice is beyond my limited capacity for courage and the grace of my imagination. In the show it is handled with daring and humour and honesty and dignity.

What you have learned from the show and its thought-provoking point of view on the right to die?
GREG:  The one thing I took away from MARY KILLS PEOPLE was that death is inevitable, but facing it with courage is a choice. I also took Grady’s amazing suits.

What has been the one thing you as an actor haven taken away from working on MARY KILLS PEOPLE?
GREG:  As an actor, the sense of dangerous discovery, revealing the truth of our characters in some of the scenes, was incredible and it is something I will remember fondly. We climbed up onto a tightrope, called down to remove the nets and cried for more wind.

What do you hope viewers continue to take away from watching MARY KILLS PEOPLE?
GREG:  I hope the audience is engaged by the writing and the performances and also provoked by the subject matter. The show tackles the deeply personal question of assisted dying and weaves it into a thrilling drama.

What has been your favorite part about working on this project?
GREG:  I loved having my son on the show, but as the father of a daughter too, watching this team of extraordinary woman create a brilliant show with strength and intelligence and integrity was very rewarding.

What has surprised you most about your career so far?
GREG:  The thing that has surprised me most about my career is the fact that I have been able to provide a great life for my wife and kids and dogs by sharing my madness with an audience. My heart is all I have to give. It seems enough. That is a miracle.

Did working on MARY KILLS PEOPLE require a bit of a brain-switch after portraying Jeremy Danvers on BITTEN?
GREG:  After Jeremy’s dark descent in season three of BITTEN, I was honestly a little shattered. MARY KILLS PEOPLE was a blessing. Grady was created as an act of creative rebellion against the commonplace, dressing up in an elegant madness and a joyful violence. BITTEN broke me and MARY KILLS PEOPLE allowed me to make a character out of all those sharp, tiny, sparkling pieces.

Do you see Grady and Jeremy as having any similarities or are they wholly different characters at their core?
GREG:  I think Jeremy and Grady have a similarity, me.  I’m kidding, but not. Every character is born anew from my heart as I chase the shadow of the words across the page. Grady was a reaction and Jeremy was a choice, but each character has bits of me and bits of something new.

At this stage of your career, what do you think you have learned from the amazing variety of roles and projects you have worked on?
GREG:  I have been blessed to work with amazing artists in some first rate productions and I have learned a lot along the way. The most important thing was to accept myself. All of me. The complexities and inconsistencies and hopes and loves and terrors are my art. I love my monsters and I am not afraid to share myself. I have learned to love beauty, not pretty, in life and art.

Then what are the perks of where you are in your career right now?
GREG:  There are a lot of perks at this stage of my career. I work with exceptionally interesting people. I travel. I am paid very well to pretend and imagine and reveal. My heart has become stronger in its repeated breaking. I’m blessed. The actor’s life is full of rejection and instability and loneliness, but the grace notes are heaven. We get to share our hearts. With you, and with each other.

You seem to take on roles that are very challenging. Do any of your characters and the situations they find themselves in ever leave a lasting impression on you?
GREG:  I do play complicated and challenging roles. I bring something different to a part. I suppose I suit the darker shadows. Every character leaves an imprint, a tattoo, on me. Some, like Jeremy, made me a better man as I grew into him. Some unsettle me, or those around me, but all of them are pieces of me. I have great storm clouds in my chest.

Has there been any great advice you have gotten?  What advice would you offer to other upcoming and aspiring actors?
GREG:  Great advice I have been given? Bruce Willis told me to lick my lips before the take because it makes you sexier. My advice to young actors: “You, alone, are enough for this art. But is has to be all of you. Hide nothing.”

Do you have any other upcoming projects that you can share that fans should keep an eye out for?
GREG:  I have season 2 of FRONTIER coming out on NETFLIX/Discovery Canada and a movie on UP TV with Catherine Bell called HIGH RISE RESCUE airing this summer. I am currently working on something completely new and exciting and I can’t say anything yet… but soon.

To see what living poetry Greg’s performance brings to Grady and his unique life, be sure to tune in for the premiere of MARY KILLS PEOPLE premieres Sunday, April 23rd at 9:00 p.m. on Lifetime.