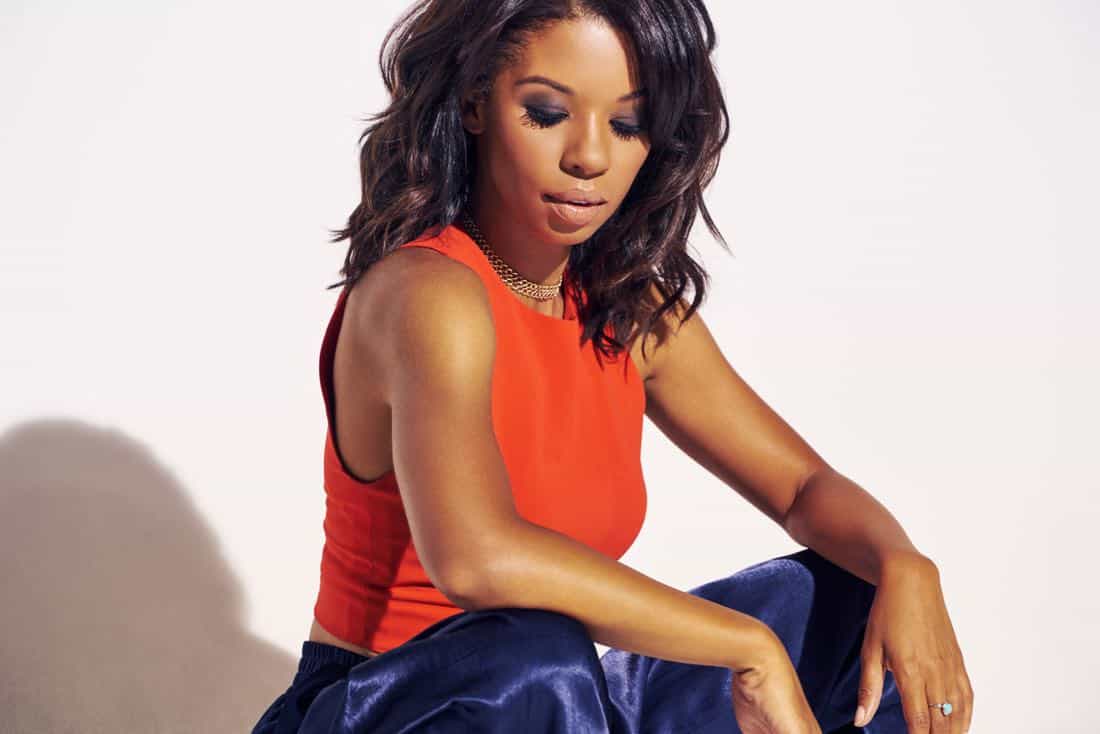 Recently seen in an array of television series from FX’s THE STRAIN, NBC’s TRAIL & ERROR and FX’s AMERICAN CRIME STORY: THE PEOPLE VS. OJ SIMPSON, Angel Parker is a deft dramatic and comedic actress. Grateful for the rich and varied roles that her career has afforded, Angel brings a layered and intriguing performance in Hulu’s new drama series MARVEL’S RUNAWAYS. Villains only look like villains until you see things through their eyes. Fortunately, MARVEL’S RUNAWAYS provides just such an opportunity to see its characters actions from both perspectives and it makes the show richer and more intriguing because of it. In an exclusive interview, Angel talks about the complex role of Catherine Wilder as well as reflecting on lessons she has learned in her career.

What appealed to you about portraying Catherine Wilder and working on Hulu’s MARVEL’S RUNAWAYS?
ANGEL: I love what a strong and multifaceted woman she is. I get to play mom, wife, lawyer, and villain! Catherine does so much and is so conflicted at times, but ultimately ends up on top. It’s a dream role.

How would you describe who Catherine is and her place on the show?
ANGEL: Catherine, along with her husband Geoffrey, are leaders of the Pride. But their family and personal ambitions always come first.

What do you most admire most about Catherine?
ANGEL: She’s strong, tough, and loyal. She also has a deep love and respect for her husband and would do anything for her son, Alex, especially when it comes to keeping him safe.

What was it like working alongside the talented ensemble on MARVEL’S RUNAWAYS? Who did you get to work with the most?
ANGEL: The cast is huge! 16 main characters and about 4 other major recurring roles. It’s a huge endeavor, but the casting is incredible. Our casting director Patrick Rush is a genius. It’s makes it very easy to act because everyone is so perfectly suited for their roles. I mainly work with the Pride and my immediate Wilder family. Scenes with Alex (Rhenzy Feliz) and Geoffrey (Ryan Sands) are always great, but the long huge scenes with the Pride are the most fun! We always end up so loopy by the end of the day.

Any favorite scenes that you can share from working on MARVEL’S RUNAWAYS?
ANGEL: The sacrifice scenes, wearing the red robes, are always so surreal. We just finished filming the season one finale and that is, by far, my favorite!

What has been your favorite part about working on MARVEL’S RUNAWAYS as a whole?
ANGEL: The cast and the material we get to dive into. The show is very well written. The fans won’t be disappointed. Also, I have very cool clothes and hair. 😉

Then, as an actor, what has been the one thing you haven taken away from the experience of working on MARVEL’S RUNAWAYS?
ANGEL: I am so excited about this show. It has helped me stay in the moment. I’m usually plotting out getting my next gig, but now I just want this one to never end.

You also worked on FX’s THE STRAIN. What did you enjoy about working on that show?
ANGEL: Working with Corey Stoll was fantastic. He’s just a great actor and I learned a lot from him. I also fell in love with Toronto! It’s a great town. I really enjoyed living and working there.

What did you take away from that acting experience on THE STRAIN?
ANGEL: I felt much more confident in my acting after working on THE STRAIN. We were shooting at night, in the winter, and still had to save humanity. After successfully doing that, I feel like I can do anything.

What has surprised you most about your career so far?
ANGEL: I’ve gotten to play such varied roles in both comedy and drama. I hope those kinds of surprises keep coming!

At this stage of your career, what do you think you have learned from the roles and projects you have worked on?
ANGEL: Just take it moment by moment, scene by scene. It can be overwhelming to tackle the whole story at once. Once I’ve done all my work on the script and my character work, which is a ton! by the time we shoot, I’m simply think where have I been and who am I talking to. It keeps my thoughts current and fresh.

Then what are the perks of where you are in your career right now?
ANGEL: I finally feel like I have a career! Those doubts and fears that I’ll never work again are on the back burner. It feels nice not to worry so much.

If there were one previous role you would like to revisit, which would it be and why?
ANGEL: That’s like choosing between your babies, I love them all!

Do any of your characters and the situations they find themselves in ever leave a lasting impression on you?
ANGEL: In THE STRAIN, I have to watch my brother get killed. That was a tough day and shooting the reactions to that were very painful.

Do you find any of your character’s habits manifesting in your own life? Like what?
ANGEL: I always play very put together women. That’s definitely me. I’m a very organized, driven person. I just don’t always get to do it with perfect hair and makeup. I wish!

Has there been any great advice you have gotten about working as an actor?
ANGEL: “Every job ends.” That’s great advice in helping you not get too big of a head when you get a job, but also helps with the pain and regret when you don’t get a job.

What advice would you offer to other upcoming and aspiring actors?
ANGEL: Work hard. Train hard. Create your own content. Find a community of actors in a class or in a theatre, that keep you inspired and focused on your goals.

Are you actively involved with any charities. Which charity do you work with most? And which would like to see your fans become more involved with and support?
ANGEL: I support the LA Mission, and many breast cancer charities. Most recently, A Cause for Entertainment Link: https://causeforentertainment.com/

A  t a time when women’s voices are rising to be heard and respected around the country and world, what do you recommend your fans do to lend support in that endeavor?
ANGEL: Always speak your truth, even when it’s difficult. People should know how you feel and where you stand. It makes you a better human in the world.

Do you have any other upcoming projects that you can share that fans should keep an eye out for?
ANGEL: MARVEL’S RUNAWAYS has kept me so busy. I can’t wait for it to premiere November 21st on Hulu. Till then, I’m just hanging with my family and friends, staying in the moment.

To find out what sinister stuff is going on with Catherine and Geoffrey and what their children do when they find out that their parents are harboring a dark secret, be sure to watch the premiere of MARVEL’S RUNAWAYS which will be released for binge-watching on November 21st on Hulu. To see what else Angel is up to in her career, you can follow her on Twitter @AngelParker and to see exclusive clips and promos for MARVEL’S RUNAWAYS, follow on Twitter @Runaways