MARVEL’S AGENTS OF S.H.I.E.L.D Recap Season 2 Episode 7 The Writing on the Wall 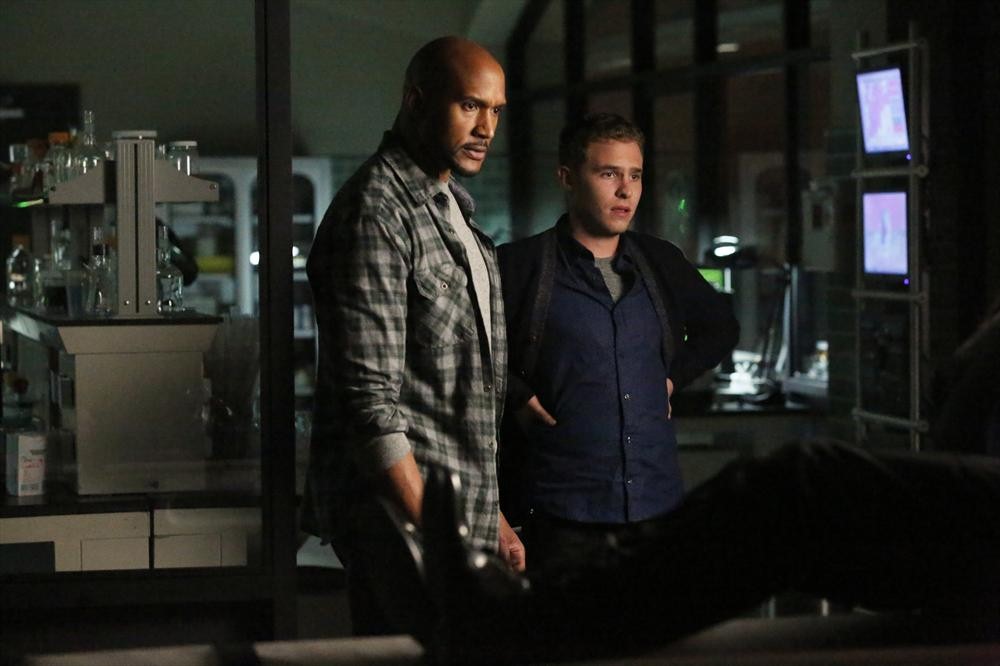 Is “The Writing on the Wall” for ABC’s MARVEL’S AGENTS OF S.H.I.E.L.D.? Well, it quite literally is in last night’s episode, which finds Coulson’s (Clark Gregg) carving compulsions getting stronger and stronger, taking over his life. Luckily, there may be a break in the case as others who share his affliction begin showing up dead, murdered at the hands of one of their own. The team tracks the killer, hoping he will lead to answers.

I like that MARVEL’S AGENTS OF S.H.I.E.L.D. has these big arcs right off the bat in season two. Season one began quite slowly, killing time until the series could build into the secrets revealed in the film Captain America: The Winter Soldier. While it seems this year’s stories could tie into the motion pictures, too, at least eventually, they also feel like they’ve been given the freedom not to wait for the big screen to catch up, to just go ahead and tell the tale they want to tell now. It’s a marked improvement.

Fans of both big and small screen Marvel endeavors have long wondered about Coulson’s resurrection, a key mystery when the show begins. The general facts are now known and “The Writing on the Wall” reveals more, as viewers are offered glimpses of the past when the serum was tested with six other individuals. It didn’t work out well, memories having to be re-written, and now only two, the killer (Brian Van Holt, Cougar Town) and his last would-be victim (Joel Gretsch, V), remain. This is the program that gave Coulson his second chance.

What I wonder is, though, after these tests failed, why was Coulson injected? Presumably it wasn’t up to Coulson, or that’s what the end of last season indicated. Perhaps Fury decided Coulson was valuable enough it was worth the risk. But Coulson alone was allowed to keep his identity. Why? Who thought this would work? Or did they know exactly what would happen and want the city Coulson has been carving to be found? That’s the new question going forward.

Skye (Chloe Bennet) continues to show none of the same symptoms as Coulson, even though she, too, has the alien blood in her veins. Does this mean Skye is an alien? Or perhaps an Inhuman, as that race has been given an upcoming Marvel film?

Coulson does betray Skye in “The Writing on the Wall,” but she should forgive him. He isn’t in his right mind, and that’s pretty obvious. This stuff made Garrett crazy, too, but Garrett had underlying evil in him. When Coulson makes poor judgment calls, he does so so that he can go try to save a life. It might not be wise or kind, but he’s not hurting anyone.

The other half of “The Writing on the Wall” finds May (Ming-Na Wen) and several agents on the trail of the escaped Grant Ward (Brett Dalton). This episode reminds us just how capable Ward is, eluding May’s attempts to get close, and quickly recognizing even agents he doesn’t know, such as Hunter (Nick Blood) and Bobbi (Adrianne Palicki). He’s a very smart person and it will not be easy to recapture him, S.H.I.E.L.D.’s best not yet being up to the task.

We knew Ward had to get out eventually, and I’m fascinated by the journey he is on. Equal parts insane and purpose-driven, it’s hard to know what he’ll do next. He definitely has his own inner compass that he follows and his own goals, so he’s not an erratic target. But what he believes and thinks is quite far enough skewed off of the norm that he’s not predictable, either. With the skills he has, he’s an impressive adversary.

I think it is telling that Ward doesn’t hurt or kill Bobbi or Hunter or anyone else. In fact, he gives his S.H.I.E.L.D. tail a present, a high-ranking Hydra official. Why? Is his end goal to prove himself worthy of Skye, which will never happen? Does he want to rejoin Hydra, which seems unlikely now that Garrett is gone? Does he think S.H.I.E.L.D. may just be desperate enough to take him back? I just don’t know, and that’s a good thing.

MARVEL’S AGENTS OF S.H.I.E.L.D. is not as good as the movies, and I think it would benefit from shorter seasons, giving the writers more time to develop a compact story. However, it is still quite exciting, and has improved over its beginnings. The characters are excellent and the stories lead to somewhere worth going. “The Writing on the Wall” continues this trend.