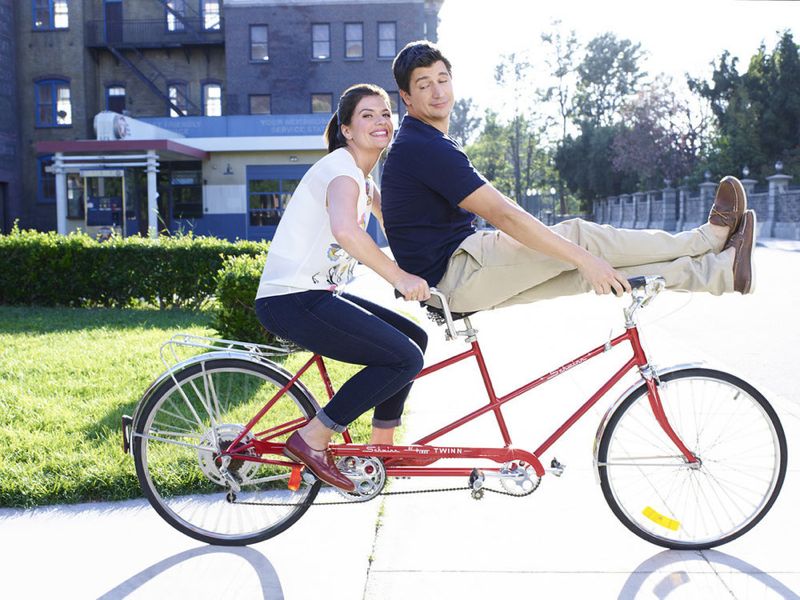 From the creator of beloved, dead-too-soon series Happy Endings, David Caspe, comes MARRY ME, airing this fall on NBC. His new show is about a guy and a girl that have been together a long time, but while they both want to take the next step and get married, they may not be mature enough to do so, given the many bad things that happen when they try. Will they be able to make it work, or are they heading for an implosion?

Since Caspe is married to Casey Wilson (Saturday Night Live), it makes sense that she would be the cast member he brings over from his previous effort to play Annie, the female lead in MARRY ME. Annie is clearly designed to play to Wilson’s strengths, being a little obsessive and creepy, while still thoroughly likeable and charming, her foibles more funny than pathetic. She is the first one to screw things up in the pilot, but she won’t be the last.

Joining Wilson is the reliable Ken Marino (Childrens Hospital, Party Down) as Annie’s beau, Jake. Marino is very patient, but allows Jake’s annoyance and doubts about Annie to creep through. Jake’s not perfect, either, though, springing things on her in an inappropriate way and not always doing the understanding thing when he should, making for a good pairing.

What we get, then, are two people who do seem to belong together, but are self-sabotaging. The pilot swings back and forth from sweet and romantic to depressing and awkward. Can they stay on the former long enough to make it down the aisle, or will the latter stumble them up enough so that they never do? And if they break up, who else is going to want them?

The supporting cast is pretty good and familiar looking, even if names of the players may escape most viewers. Playing Jake and Annie’s friends are Sarah Wright (Parks and Recreation) as Dennah, John Gemberling (Broad City) as Gil, and Tymberlee Hill (Grey’s Anatomy) as Kay. None get enough development to really stand out in episode one, but each can deliver a one-liner, which is what’s really needed here.

Interestingly, only one of the three parents introduced is listed as a main character. Tim Meadows (the Ladies Man) plays Kevin 1, Penny’s dad. But Penny’s other dad, Kevin 2 (Dan Bucatinsky, Scandal), and Jake’s mom, Myrna (JoBeth Williams, Private Practice), are only guest stars. Given their equal roles in the leads’ lives and how good all three are, that’s a shame. One can only surmise that Bucatinsky is too busy with other projects to sign on, but hopefully he and Williams can appear early and often.

I like how rocky MARRY ME’s plot begins, even when it makes me uncomfortable. Too often, TV either shows us the early stages of a relationship, where exterior factors get in the way of the happy ending, or the later stages, when they’ve settled into their married roles. MARRY ME aims for a middle period, extending something often glossed over, as the couple portrayed is at an important turning point that could go either way.

That may not make a solid long-term premise on which to build a show, as certainly the writers will have to choose to keep things going. They’ll choose marriage, of course, because Caspe already did the opposite with Dave and Alex in Happy Endings and MARRY ME is focused on two leads, rather than an ensemble of six equals. But it’s a terrific, interesting starting point.

In a fall where cutesy dominates (see: A to Z, Manhattan Love Story), MARRY ME offers an alternative that feels authentic and is genuinely funny. I look forward to seeing more of it when MARRY ME premieres October 14th on NBC.