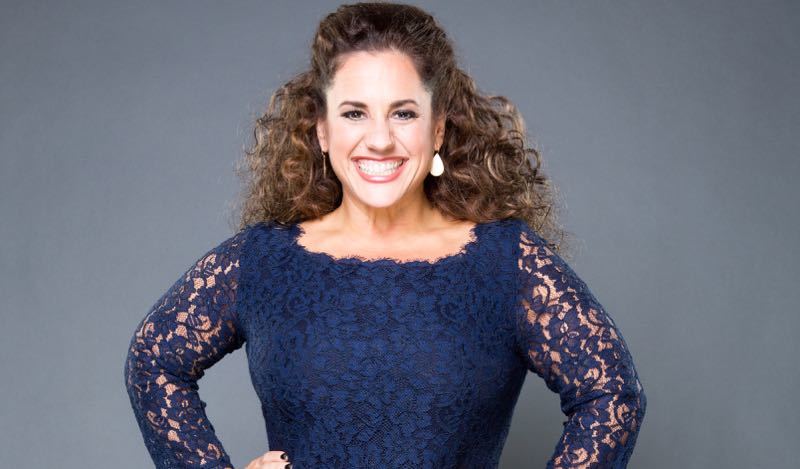 If you haven’t been watching TLC’s new series, All About Sex, you need to get on that. I’ll admit that it took me a couple episodes to get into the groove of how the show works and how the ladies work together, but now I love it.

When I was offered the chance to chat with one of the stars, Marissa Jaret Winokur, you can bet I was stumbling over myself to accept. Winokur is the sassiest of the group, but she’s also the one who usually blushes first when the talk gets super-naughty (in other words, pretty much whenever co-host Margaret Cho opens her mouth).

“I feel like it was in Margaret’s wheelhouse,” Winokur said about her co-host’s no-holds-barred approach to talking about sex. “I feel like the show should be called ‘Margaret Cho in the know’ or ‘In the know with Margaret Cho.’ Some of things she has to say are to me outrageous and insane, but she’s done it, she’s tried it and she can tell you why she liked it. I could crawl out of my skin with some of the things [she says], but I think that’s what’s exciting about the show because I mean I’ve never tried any of the things she’s tried and I thought I was fun and experienced.”

Winokur may not have the wild experiences that Cho has, but she can often be the most outspoken of the group. It was that dichotomy that interested me about her and I was curious what Winokur’s thoughts were on sex and love.

“For me, going into [the show] I really believed ‘Oh, this is great, I’m a really sexual person. I can be super-sexual, it will be great.’ But then it turns out that I’m like, ‘Oh no, I’m a total prude and I don’t know anything and I’ve never heard of that and I don’t know that initial stands for.'”

Winokur herself is getting an education, which is part of the fun for her. “I know nothing. So that’s been exciting because I’ve been learning a lot, but I also want to crawl out of my skin half the time because it’s so much information. I think that’s what’s good about the show is that Margaret does have so much information.”

The married mother of a six-year-old, Winokur has been open about how being a parent has changed her and her husband’s sex life. “Honestly, I would rather eat popcorn than have sex tonight,” she said, but was quick to clarify, “It doesn’t mean that I don’t love my husband, I do, but if my six-year-old ran me into the ground that day then that is the last thing on my list.”

It’s an attitude that has gotten her in trouble with her co-hosts. “Margaret will say something funny about that or Heather [McDonald] will tease me about that and then Dr. Tiffanie [Davis Henry] will say something and you’re like, ‘Oh crap now the doctor’s talking. Oh my god, now I [have to admit I] have a problem.'”

Winokur may have sowed some of those wild oats out of her system when she was younger. “Here’s the truth, I was a very promiscuous teenager and 20-year-old and I had a lot of interesting, exciting fun which I thought was interesting and exciting until I met Margaret.”

It may seem strange to admit that you aren’t having a lot of sex on a show that’s supposed to be all about sex, but Winokur thinks she is talking for some women out there. “I think I represent everyone else’s point of view,” she said.

Winokur admitted she’s great at giving others advice, so even though she wasn’t having a lot of sex herself, she had no trouble coming up with ways for single people to get some of their own.

“Oh my god, go internet dating,” she said, adding that it only works if you’re honest. “Check off everything honestly, [post] a true picture, then you’re going to get the people that are into you. Then it’s not like you’re going to some bar hoping that someone looks at you.”

In the show’s most recent episode, Winokur told her fellow hosts that her openness about her sex life at home had caused some changes. Apparently, the Winokurs have been getting busy, thanks to the conversations she has had on the show and her and her husband’s realization that they had the power to shake things up. Winokur said she put down the popcorn, turned off the TV and, viola!, sex was had. So the show isn’t just helping the audience have better sex, but the hosts as well.

Be sure to check out the season finale of All About Sex when it airs Saturday, Feb. 14 at 11/10c on TLC.