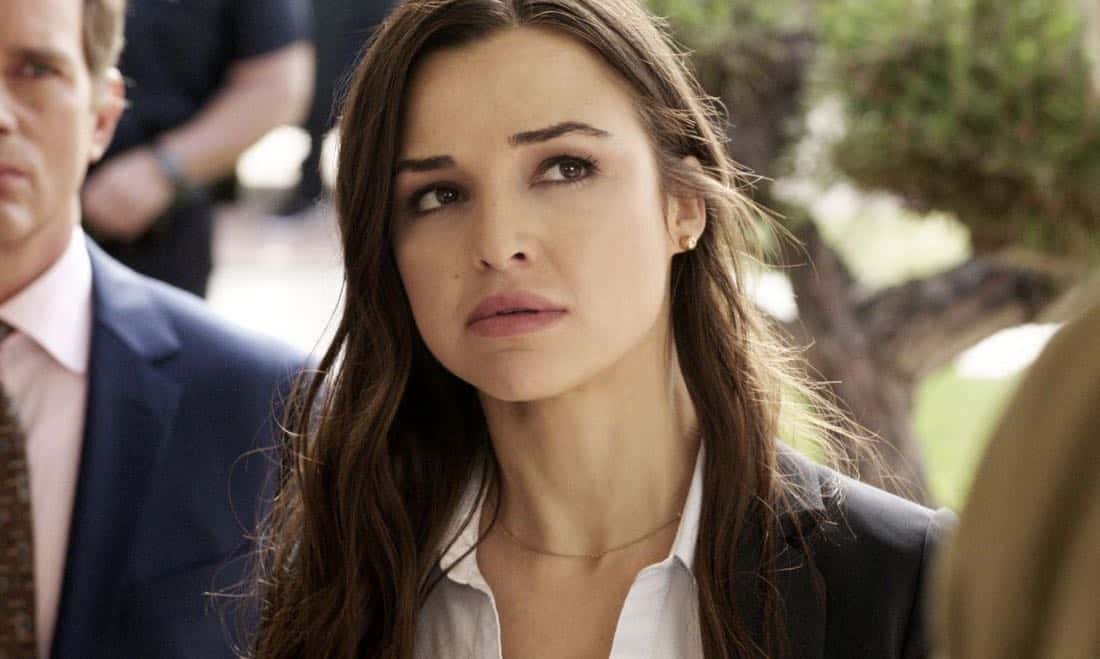 As TNT’s hit drama series MAJOR CRIMES returns for is sixth and final season, viewers will meet newcomer Jessica Meraz, who portrays Detective Camilla Paige. Fans may have already discovered the fine actress who broke out in the ABC Family series CHASING LIFE, where Jessica portrayed Natalie, the sister that April never knew she had. Jessica’s nuanced and humorous portrayal in CHASING LIFE made her a fun addition to a show that celebrated life and family. Jessica is certain to bring just as layered and warm portrayal to her character in MAJOR CRIMES, another show that reminds us that family is who we chose it to be, whether by blood or co-workers bonded by work experiences. In an exclusive interview, Jessica introduces her character Camilla and shares a bit about her growing career and the lessons she has learned along the way.

What appealed to you about portraying Camilla Paige and working on TNT’s MAJOR CRIMES?
JESSICA: Camila was presented to me with tremendous backstory and as a layered person. She was not just one note. Our writers gave me so much to work with while also giving me the freedom to make her my own. The show is already a huge success and I was thrilled to join such a talented ensemble.

How would you describe who Camilla is and her place on the show?
JESSICA: Camila comes in to the Major Crimes unit with some existing relationships. Provenza has known her since she was a young girl. Her parents were killed by a driver under the influence and Provenza solved that case and became close to the family. She ended up raising her five younger brothers and sisters on her own. The way she did that was by becoming an LAPD Officer and an LAPD Detective working in Criminal Intelligence and then Missing Persons. There she was the protege of Asst. Chief Leo Mason who is the one who brings her into Major Crimes. She is a person who is very direct and unapologetic in her pursuit of truth and that can be to the detriment of her personal relationships. She is not always the most liked or best teammate, but she wears her heart on her sleeve and has tremendous grit.

What do you most admire most about Camilla?
JESSICA: I admire Camila’s strength. She has had to survive a lot of pain and struggle but she has overcome it. She found her power in her career and is diligent in finding justice.

What was it like working alongside the talent ensemble on MAJOR CRIMES? Who did you get to work with the most?
JESSICA: It was intimidating to come into what was already a tight knit family that had been together for many years, some 13. But as soon as I walked in on my first day, they all welcomed me with open arms. Particularly the women of the show: Mary [McDonnell] and Kearran [Giovanni]. They took me under their wing and always gave me tips and love. I worked with everyone, because we mostly work as a team, but I probably spent the most time with Provenza and Tao, or GW [Bailey] and Michael Paul Chan. It was like a crash course in acting. I respect their bodies of work tremendously and learned so much from them. Also, I call MPC my best friend because he is just the coolest guy in the world.

Any favorite scenes that you can share from working on MAJOR CRIMES?
JESSICA: I love all the tactical scenes where we are raiding a suspect’s house or going after a perpetrator, but the scene that stands out the most to me was one that we shot in Redondo Beach. It was a scene with Daniel di Tomasso and it had everything in it you could want as an actor: story, relationship, action, unique camera work, awesome location… It was one of those days that I had to pinch myself. I can’t wait to see how it turns out!

What has been your favorite part about working on MAJOR CRIMES as a whole?
JESSICA: That’s easy: the people. From the producers, to the writers, to the cast, to the crew… these people are the tightest set in town and I feel so lucky they let me in the way they did. It’s been a week since we wrapped and I miss them so much already!

You also worked on ABC Family’s CHASING LIFE. What did you enjoy about working on that show?
JESSICA: CHASING LIFE was my first big job and it will always hold a special place in my heart. I feel like I went from child to woman during the three years I was working on the show. I enjoyed the material. We were working with highly sensitive material and it felt like we were doing something important, giving a face to cancer in young adults. The actors were fantastic and the material was deep and I got to prance my way through it in an assortment of crop tops as my character was a sassy little vixen.

What did you take away from that acting experience on CHASING LIFE?
JESSICA: That’s where I learned everything about working on a set. It was a very fun time in my life. I got to explore the funny in the serious.

What has surprised you most about your career so far?
JESSICA: The comedic emphasis. I never saw myself as the “funny girl” growing up, but most of my roles have been pretty comedic. It gave me the confidence to nurture that side of myself and take comedic risks. It has been a surprise and also a gift. I have since written and performed my own stand up routing, written comedic specs, and performed in improv troupes. That was not something I envisioned when I first moved here from El Paso.

At this stage of your career, what do you think you have learned from the roles and projects you have worked on?
JESSICA: The only limits I have are the ones I set for myself. I just have to free myself from any doubt and then anything is possible.

Do any of your characters and the situations they find themselves in ever leave a lasting impression on you?
JESSICA: Absolutely. That is the greatest gift we get as actors: to experience the world in someone else’s shoes; to try to understand instead of judge. Each character is a great opportunity to learn and empathize in a new way.

Do you find any of you character’s habits manifesting in your own life? Like what?
JESSICA: Oh, yes. I try not to take my character home with me, but it definitely happens. Natalie in CHASING LIFE used her sexuality and people skills as her main tool and I found myself adopting those characteristics more during that time. Camila leads with her intelligence and has no tolerance for disrespect. I have found myself to be more direct and less of a pleaser lately. And I have snapped pretty badly at some cat callers. Her aggressive nature is something I hope to tame in myself a bit.

Has there been any great advice you have gotten about working as an actor?
JESSICA: Be your own biggest fan!

What advice would you offer to other upcoming and aspiring actors?
JESSICA: Create. Find what you want to do and create it for yourself. You can make almost anything on your own now with an iPhone and outlets are aplenty. Waiting for something magical to happen without the work is just that: a fantasy.

Are you actively involved with any charities. Which charity do you work with most? And which would like to see your fans become more involved with and support?
JESSICA: We, at Major Crimes, are very involved with the Sunshine Kids — a charity for kids with cancer. Our own GW Bailey is the Executive Director and it has been very inspiring to see how dedicated he is and how much he does to brighten these kids’ lives. I support several charities but am looking to direct my efforts to a charity of my own benefiting Ciudad Juarez, Mexico, where my Mexican side of the family is from and many still live.

At a time when women’s voices are rising to be heard and respected around the country and world, what do you recommend your fans do to lend support in that endeavor?
JESSICA: Make friends with other women. Making friends is vulnerable and if you reach out to another woman, I think you’ll find that 9 out of 10 times you will be meant with kindness. I think women think other women are scary but really, we are just scared. Connect to other women, get more women on your team, and don’t put other women down to make yourself feel better. If we all start from within, I think we can make a big difference.

Do you have any other upcoming projects that you can share that fans should keep an eye out for?
JESSICA: MAJOR CRIMES premieres Halloween night at 9PM and every Tuesday after that at 9pm on TNT. Then “Do You Want to See a Dead Body?” a series with Rob Huebel and Terry Crews, will be released later this year on YouTube Red.

To see how Jessica’s character finds her niche in the Major Crimes division and as a part of the team, be sure to tune in for the Season 6 premiere of MAJOR CRIMES at 9:00 p.m. on TNT. To find out more about Jessica’s upcoming projects, you can follow her on Twitter @jessicameraz

No matter where Jessica goes, we are certain to follow. She radiates on screen and her infectious energy pulls us happily along with her.

“Do You Want To See A Dead Body?” trailer: