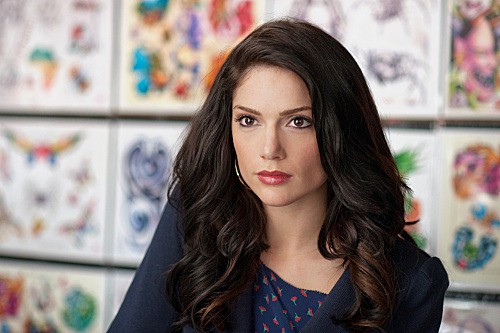 MADE IN JERSEY is a CBS show with a more youthful appeal. It’s a case of the week legal procedural, whose lead character happens to be a young, hip Jersey girl recently transplanted into NYC, more street smart than everyone around her, rather than the older folks who normally populate the station’s dramas. Will this be enough of a change up to be interesting, even while keeping with the same formula? Will viewers in their twenties join the senior citizen crowd in watching this show?

Probably not. Despite the pretty-Ugly Betty-esque lead, Martina Garetti (Janet Montgomery, Entourage), who has tons more personality than the average CBS character, the basic ingredients are the same. There is a case. It must be solved by the end of the hour. Other characters will think Martina isn’t up to the task, and she will succeed anyway. Happy ending.

Now, there are a couple of extra elements that set MADE IN JERSEY slightly apart. In keeping with Martina’s background, she has a large family whom she enjoys being around. Led by matriarch Darlene (Donna Murphy, Trust Me), the boisterous bunch will probably cause Martina added stress, and give her little side stories, like the first episode’s bit about her niece wanting a tattoo, distracting her from the legal work at hand. But considering none of them are listed in the main cast on the show’s website, they probably won’t figure too heavily into the season.

It’s hard to tell from the first episode what the chemistry will be between the various full-time cast members. The two lawyers Martina interacts with most aren’t on the show’s website either, making me think some recasting was done, and they will be replaced by others who might have a different reaction to Martina’s plucky ways.  Kristoffer Polaha (Ringer, Life Unexpected) and Megalyn Echikunwoke (The 4400, CSI: Miami) will apparently be joining the firm soon, and whether they will be friend or competitor or something in between remains to be seen.

Other people are already established on MADE IN JERSEY. Martina’s boss, Donovan Stark (Kyle MacLachlan, Desperate Housewives, Portlandia), is a whimsical fellow, sort of a toned down version of the Malcolm McDowell role on TNT’s Franklin & Bash. He takes a shine to Martina at once, seeing something of himself in her. It’s not a particularly fresh take on a superior, but played wonderfully by MacLachlan, it’s hard to complain.

Cyndi (Toni Trucks, Music and Lyrics) is Martina’s assistant. This is a step up from many young lawyers on TV, who don’t have their own helper. She is also a friend, so she serves a dual purpose on the show. Viewers need more of her past, though, if we’re going to appreciate her. Martina has only been at the firm a few weeks, and they are already gal pals. How did this happen? Why do they click so well? This is a relationship that should be explored.

Then there’s Riv Brody (Felix Solis, NYC 22). His investigator should be a popular character, but it’s hard to root for him when he seems so inept. Martina talks about how storied Riv’s work is, and yet, in the “Pilot,” she finds all sorts of things that Riv misses. Hearing the audio tone, something her niece discovers, makes sense. The chalk dust on the sleeve, though, among other things, should have been seen by Riv, not Martina. This is done, presumably, because Martina is the lead, and Riv is just a supporting character. But why have him at all if he’s only going to follow Martina around and admire her work? How did he get such a reputation as a top notch detective when a young lawyer does his job so much better than he does?

MADE IN JERSEY can’t exactly be called disappointing because, as a crime procedural on CBS, the bar isn’t set all that high anyway. All it has to do is deliver the same package every week, and an important mass of viewers is happy. But for those who value good television, this looks to be a total dud that isn’t worth your time. Which is a shame, since there are a couple of characters here I could really like.

MADE IN JERSEY premieres September 28th on CBS.