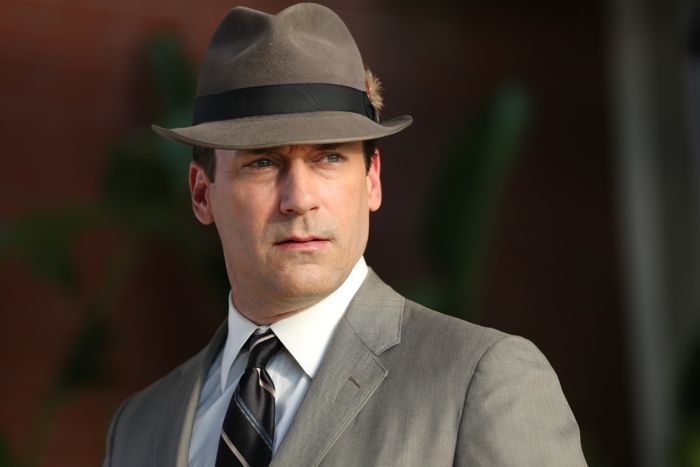 AMC’s MAD MEN is one of, if not the, most anticipated returns this spring. The final season premiere (though only seven episodes will air this year, with the other seven being held for another twelve months) is finally here. Called “Time Zones,” the hour reacquaints us with almost all of the familiar faces, continuing the story of Dan Draper (Jon Hamm), Peggy Olson (Elisabeth Moss), Roger Sterling (John Slattery), Pete Campbell (Vincent Kartheiser), Joan Harris (Christina Hendricks), and others.

Disappointed that the first paragraph didn’t give anything away? Well, I will tease what I can, but don’t expect this preview article to be full of revelations, either. AMC is extremely strict about keeping things a secret, as fans have long gathered from their sparse episode descriptions and nearly opaque commercials. I am not allowed to tell you how much time has passed, where Don is professionally, who any of the new characters are, whether the firm has successfully expanded to the West Coast or not, or quite a few other things. So I’ll do my best to tantalize you without spoiling anything at all.

I will say “Time Zones” is a very unexpected hour. It may not be as large scale as some of the other MAD MEN premieres, checking in with everyone, but slow to show us anything new. It’s an intriguing start and it does keep true the tone and arcs of the previous year, but it isn’t going to give any “wow” moments that has everyone talking the next day. OK, maybe one or two, including one excellently structured twist. But certainly no earth-shattering developments that change the series forever.

Much of MAD MEN’s success is in making us care about those depicted. “Time Zones” serves each of those main characters mentioned in the first paragraph well, as it also does a host of other long-time performers on the show. There are some wonderful growth moments, and satisfying interactions. Joan, in particular, catches my attention. I’m excited to see how a few of these develop over the next few weeks.

The commercials that have been running of the characters at an airport is apropos, even if it’s not exactly what happens. Airports and plans do figure into this first hour, and likely will for a number of future installments as well. I think it’s not hard to guess why, considering where last year ended, but other than mentioning that, I can’t expound upon it. I will say, there is a scene featuring two of our main players outside the terminal that does feel completely stolen from the ad, including their slow moving and the music, but may not line up with what one would assume it means.

More importantly, the airport is a metaphor for where these people are. They’re all in a transitional state, not where they want to end up, but not where they started, either. The possibilities are endless, and it’s up to the individuals which destination they’d like to choose. I think a strong theme of season seven will be in line with this, a group on layover, and a number of characters may fly off in separate directions before it’s all over.

I’m not allowed to tell you about any new characters, but there are some very recognizable faces in the first episode. Two, in particular, are people that have graced the television screen before, and whom I am a fan of. I think it’s vague enough to say one starred in a horror movie franchise and another is currently a main player on a sitcom that’s been around for a few years and is still currently running. One of the two is poised for a possible arc, and the other could just be a one-off. And that’s the end of the hints about those.

A recurring player who hasn’t had a major role on the show in awhile also returns and appears to be staying for at least a little bit. I am definitely a fan of this plot.

As to when the story takes place, while I can’t tell you that exactly, I will say this was also not what I expected. Given the dramatic climax of season six, I had formed in my own head a picture of where the plot was heading, but not being privy to the writers’ discussions, I got it completely wrong. As did everyone else whose comments or articles I’ve read. I suspected early in my viewing of “Time Zones” how much time had passed, but it was not confirmed until much later, so even MAD MEN itself isn’t quick to reveal this important nugget.

And that’s about all I can think to say without getting into trouble. I supremely respect this series and this network, and they’ve served fans well by keeping a tight lid on things. In the modern world, spoilers are all too common. It’s nice to see someone buck that trend, putting major effort into letting audiences be surprised. For this reason, I am happy to comply with the rules, as difficult as it is, and assure you that “Time Zones” is true to form and the start of a fitting final story.