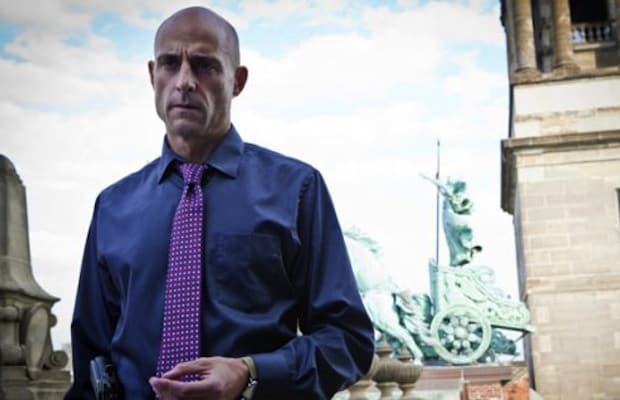 AMC’s LOW WINTER SUN begins with the murder of Detroit cop Brendan McCann (Michael McGrady, Ray Donovan) by two of his fellow officers, who do their best to make the death look like a suicide. Viewers are told that McCann is an alcoholic, corrupt, working with mobsters, and an all-around not-good guy. He deserves to die, right?

Well, that’s not clear. LOW WINTER SUN is all about shades of grey, with a character claiming early on that morality is neither black and white. Said character, Detective Joe Geddes (Lennie James, The Walking Dead, Jericho), who happens to be Brendan’s partner, used to be in priest school, so he knows a thing or two about right and wrong.

Yet, just doing what one should or shouldn’t do isn’t enough, and everyone may have a different opinion on whether they are working towards justice or not, and how far one should go.

LOW WINTER SUN asks us to forget about a style of storytelling where we know what’s going on and just pay attention to the characters. What each person says and does may be much more telling than how the plot unfolds, and it presents a world where right and wrong are relative, as well as shifting from moment to moment. The only certain rule in this complex drama is that the episodes will be unpredictable, and we’re supposed to just take it all in, saving figuring things out and making our judgments for later.

Of course, every television show needs an access point where viewers can connect with the world being presented. LOW WINTER SUN’s main protagonist is Frank Agnew (Mark Strong, reprising the role from the British miniseries on which this show is based). Frank is the mastermind behind Brendan’s death, convinced by Joe that killing Brendan is the right thing, and that Brendan may have hacked up Frank’s love. Thusly, Frank is introduced as a hero, a man acting for the right reasons.

Frank and Joe’s alliance quickly falls apart. Joe may or may not have been up front with Frank, meaning Frank can’t trust his accomplice. Joe could be dirty, like Brendan, or could be lying about Frank’s girl. He may just be a smooth talker, or he may have yet-to-be-revealed reasons for wanting Frank dead. There’s a lot of ambiguity here, which James plays brilliantly.

Which is a hallmark of the rest of the series, too. Characters know different things at different times, and have their own motivations. These are well-defined individuals, which means their interactions are complicated and layered. Just as people can be deceptive in real life, so, too, can the players in LOW WINTER SUN, which makes it hard to accept what plays out on screen at face value. This is a plus for the show.

Things get more complicated when Internal Affairs agent Simon Boyd (David Costabile, Breaking Bad, Suits, Damages) shows up to look into Brendan. Simon arrives before Brendan’s body is found, but Simon is very interested in not only what happened to Brendan, but what the implications are. He is the type of man to keep things close to the vest and goad his subjects or not, as the need arises, driving everyone crazy very quickly. He is definitely intelligent enough to eventually put the pieces together, but is he wise enough to balance that information and the law with reality and judgment? Costabile is the perfect man for this difficult, juicy role.

Simon isn’t the only one Frank needs to worry about. A fellow officer, Khalil (Athena Karkanis, Wild Kratts), is already taking note of Frank’s odd behavior, as Frank tries to keep himself under control and not let doubt and guilt consume him. Frank’s boss, Charles Dawson (Ruben Santiago-Hudson, Castle), cares more about his career than his officers, tasking Frank with keeping Brendan from damaging him, and would surely throw Frank under the bus if need be. Frank is surrounded by people who might cause him trouble.

LOW WINTER SUN also takes time to examine the criminal side of Detroit, the one in which Brendan was mixed up in. There’s a wanna-be crime boss, Damon (James Ransone, Treme), his wife, Maya (Sprague Grayden, 24, Sons of Anarchy), and their new recruit, the psychologically damaged Nick Paflas (Billy Lush, The Chicago Code), to round out the cast. This means that not only will the show be giving us a very involved police presence, but also showing the other side, too, which makes sense, given the cross-over component, with villains and heroes working both sides of the line.

The result is an intriguing series that should be well-accepted by AMC viewers, who expect an extremely high quality to their programming, with characters and scripts not easily digested, and installments that leave them with much to ponder and debate. Despite its trappings of a crime drama, LOW WINTER SUN is so much more, and should feel right at home with the network’s other fare.