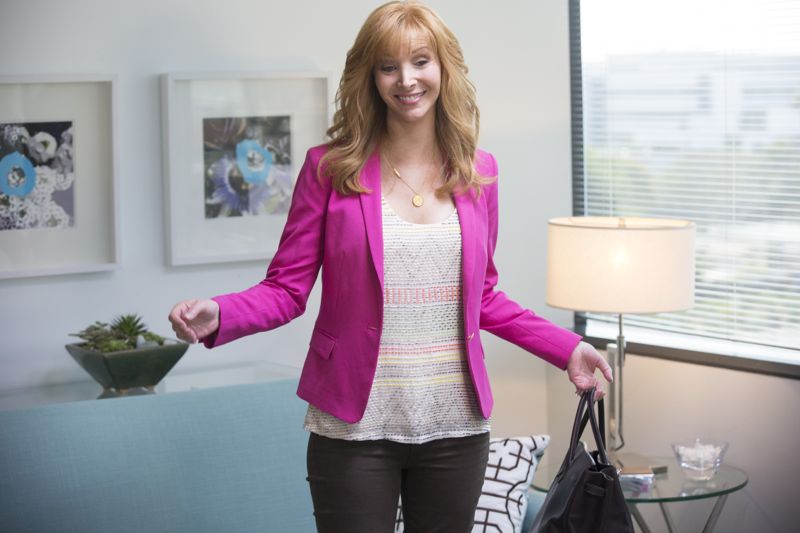 “B level” TV star Valerie Cherish was a pioneer of reality television. Now, it’s ten years later – there’s more TV than ever and the onetime sitcom star wants back in.

Lisa Kudrow (Emmy® winner for “Friends”) stars as the embattled Valerie Cherish, a fading TV “It Girl” who was once so desperate to stay in the spotlight that she allowed cameras to follow her every move as she appeared on a new sitcom, with disastrous results.

Q: How did the revival of THE COMEBACK come about?
LISA KUDROW: The big moment was when HBO got Michael Patrick King and me over to their offices and said, “We thought it would be great if we did something with THE COMEBACK.” The next thing I remember is waiting for the car in valet parking and Michael and I were just staring at each other, almost about to cry, saying, “This doesn’t happen, this is fantastic. What just happened?” We’re so lucky we get to do more.

Q: How did you rediscover the character of Valerie after nine years?
LK: That was in the writing. In the writing, I kept wondering, “Is this her? Is this her?” I had to realize that, like myself, she’s nine years older and everything’s nine years later. A lot’s changed. Things have happened. At first, she seemed a little crankier to me. Michael and I talked about her character and how she might have changed. But as we kept going, we did find that person who’s so optimistic, who spins everything into, “That’s ok, because …” And that’s Valerie.

Q: What originally inspired THE COMEBACK?
LK: A lot of things informed THE COMEBACK and Valerie Cherish, because at the time, reality TV was the next big thing that we saw taking over. We knew that networks and studios weren’t looking for as many scripted shows. They were shifting to reality shows. And all these reality stars would then become famous for a little bit, but after that, what was supposed to happen to them? It’s a weird thing, fame.

I think the important thing was not making Valerie a victim. Instead, she’s phony and self-serving and just trying to get back in the spotlight. It’s not for art. There’s not a ton of professional integrity about her. But she has some personal integrity when it comes to important things. The truth is, for just about every profession, at some point everyone’s asked themselves — maybe even every single day — “Do I really have to do this?” and realized, “I guess I have to if I want to keep my job,” or “I have to if I want that bigger prize over there, but it wouldn’t be my first choice.” So I think that was relatable and uncomfortable all at the same time.

Q: How did you come up with the idea for Paulie G.’s HBO series, “Seeing Red”?
LK: It was crazy. First Michael thought, “Paulie G. is writing a show for HBO based on himself writing ‘Room and Board’ [the fictional show featured in the first run of THE COMEBACK]. What if Valerie auditions for it?” And I said, “What if Valerie gets it?” That just blew our heads off. We talked for a long time about the story, about the arc of the episodes.

There were certain things that we wanted to see happen. We wanted to look at Valerie and Mark’s relationship, and Jane, Mickey and Paulie G., where they start and end up. We also wanted to have a glimpse into Tyler, the nephew who says, “Okay, I’ll have a career in entertainment.” And then there’s Valerie, stumbling. I think it’s really important to see that she knows it’s happened, but always says, “Here’s why it’s ok.” But the stakes this time get bigger and bigger. It gets tougher to spin.

Q: Do you think Valerie has grown as a person since the first season? Or do you think she just believes she’s evolved?
LK: I think they all believe they’ve evolved, even Paulie G. They’re all trying. They haven’t been tested yet, but “Seeing Red” is going to test everyone. Being on an HBO show is going to test them all. Everyone thinks their priorities are straight, although I’m not sure Valerie ever says her priorities have changed, so that’s pretty honest.

But everybody else believes they’ve evolved. Paulie feels, “I am the artist now and I’ve been through my struggles.” Jane has won her Oscar, but it doesn’t mean anything. Everyone’s been through their thing and, of course, it’s Valerie who tests everyone.

Q: So many of the original characters return, from Mark to Juna, Paulie G. to Mickey. Were you expecting that kind of response from the actors?
LK: No, it was so thrilling. We were still writing the episodes when people started discovering that there was going to be more of THE COMEBACK. Initially we reached out to some people, and then we were hearing from others. We knew we wouldn’t be able to have them all in every episode, but we were hearing people say, “I want to be part of it.” So we moved our production schedules around, and they moved their immovable schedules around to make it work. It was great.

Q: The show developed a strong cult following and fan base that kept growing, even years after the show was off the air. Did that surprise you?
LK: The thing that really surprised me and made me so happy, but also made all the sense in the world, was that younger people were loving the show. Younger people grew up with reality shows, so they had the “Real Housewives of Everywhere” already, they had people behaving really poorly on TV already. But when we first did the series, that was still new, and may have been too tough for people to take then. We really didn’t have a point of reference for  a woman who would be so humiliated. Now they do it all the time.

Q: What has been the most satisfying thing about working on THE COMEBACK again so far?
LK: Just getting to be Valerie again, because it is fun to be someone who just won’t accept the negative things. That is fun.

When the HBO comedy series THE COMEBACK returns for eight episodes on SUNDAY, NOV. 9 at 10:00 p.m. (ET/PT), Valerie thinks she has it all figured out this time. She doesn’t.