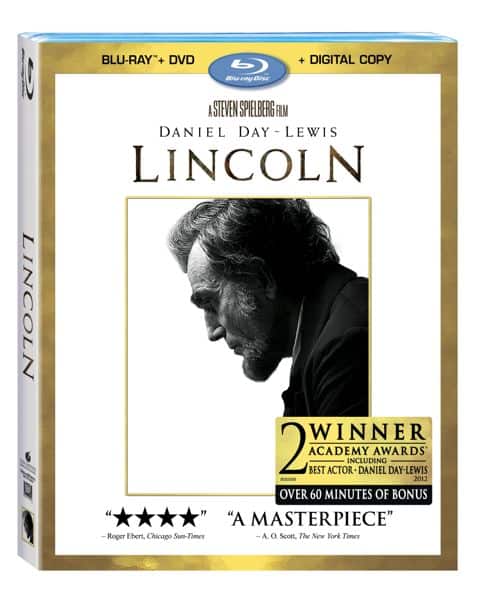 One of the year’s most critically acclaimed and best reviewed motion picture dramas of the year, DreamWorks Pictures and Steven Spielberg’s “LINCOLN” arrives in North America on Blu-ray™ Combo Pack, Digital and On-Demand platforms on March 26, 2013 and Internationally on Digital HD beginning on April 24th and Blu-ray/ DVD on May 8th. With two Academy Award®-wins for “Best Performance By An Actor In A Leading Role” & “Best Achievement In Production Design”; a Golden Globe for “Best Performance by An Actor In A Motion Picture-Drama”; a BAFTA for “Leading Actor”; and AFI “Movie Of The Year,” “LINCOLN” is this year’s must-own motion picture to add to any collection!

Inspired by the true-life events confronting Abraham Lincoln and his monumental moral and political challenge to amend the United States Constitution to permanently abolish slavery, “LINCOLN” is a rich and compelling historical and human drama that has been hailed as one of the best film of the year. In-depth bonus features on the Blu-ray/DVD Combo Pack takes viewers behind-the-scenes of director Spielberg’s life-long fascination with Lincoln and the 12 years it took to bring the story of one of history’s and mankind’s greatest triumphs to the screen.

From DreamWorks Pictures and Twentieth Century Fox, in association with Participant Media, “LINCOLN” is directed by Steven Spielberg, produced by Spielberg and Kathleen Kennedy, with a screenplay by Tony Kushner, based in part on the book “Team of Rivals: The Political Genius of Abraham Lincoln” by Doris Kearns Goodwin.

In North America, “LINCOLN” will be available for in-home viewing as follows:

The Journey To Lincoln—Steven Spielberg and his collaborators discuss the challenges and excitement of bringing this story of a complex and very human president to the screen.

In The Company Of Character—Delve into Daniel Day-Lewis’ portrayal of Lincoln, and discover the authenticity and openness created by the actors and filmmakers on set.

Crafting The Past—Examine the re-creation of Lincoln’s era through authentic period details in production design, costume and makeup.

Living With Lincoln—Follow Steven Spielberg, the cast and crew through the shooting of the film, from the battle at Jenkins’ Ferry, through the epic 13th Amendment showdown in the House of Representatives, to Lincoln’s tragic end.

In Lincoln’s Footsteps—Explore the film’s editing, sound design, and the subtle yet poignant musical score by John Williams, and discover how relevant and inspiring Lincoln still is today.

The Journey To Lincoln

The Journey to Lincoln

Internationally, “LINCOLN” will be available on Digital HD beginning April 24th and the Blu-ray and DVD will begin releasing May 8th.  Territory release dates, product configurations and bonus materials may vary per market. The international Blu-ray will contain the same six bonus features as the North America Super Set and the DVD special features will include “The Journey to Lincoln” and “Crafting the Past.”

Those who would like to stay connected with the exciting “LINCOLN” release are encouraged to: