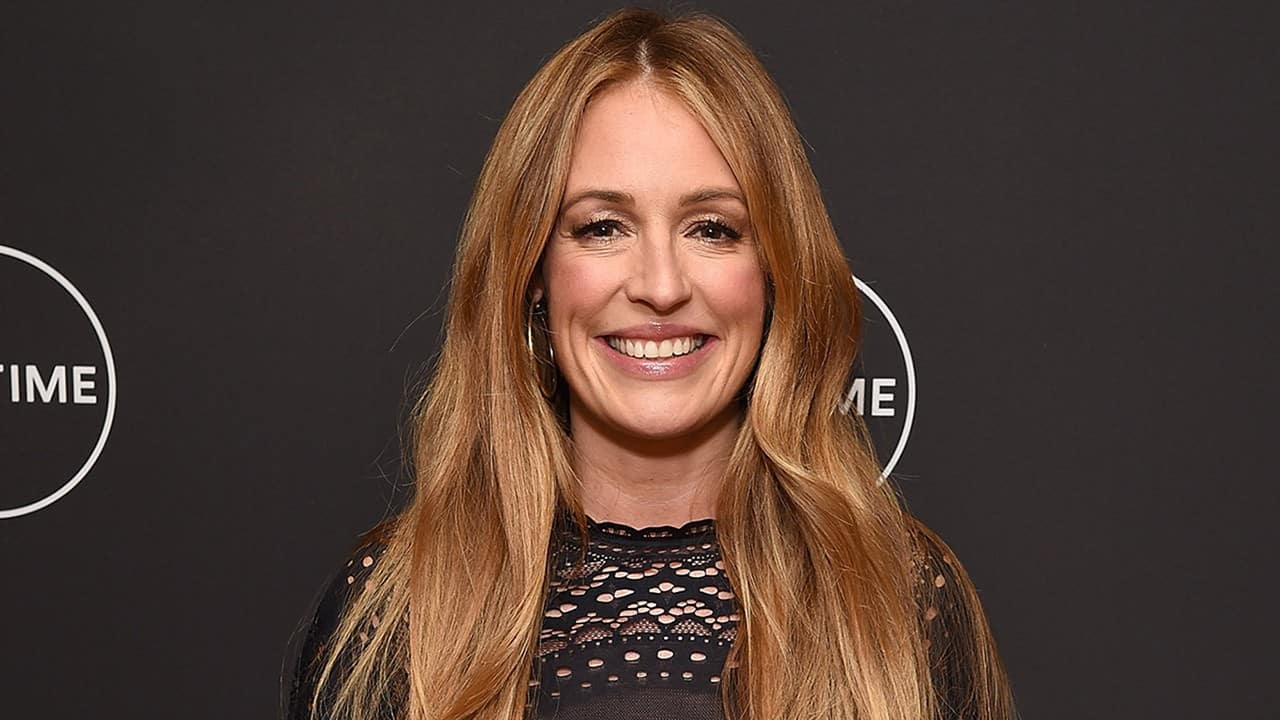 In the new Lifetime series THIS TIME NEXT YEAR, participants are invited to set a personal goal that he or she aims to achieve in one year and then to return one year later to reveal whether or not they reached their goal.  Hosted by Cat Deeley, THIS TIME NEXT YEAR is a show that emphasizes hope, determination, and personal achievement.  It wants to encourage every day people to aim for their dream and actually achieve it — whether it is weight loss, having a child to add to their family, recovery from a grave illness, or starting a new career.  By showcasing positive and achievable goals that a person sets and showing that they were able to attain their goals in one year and celebrating those wonderful achievements, THIS TIME NEXT YEAR is a story of hope and success.  In an exclusive interview at the Winter Television Critics Association tour, Cat Deeley talks about the personal joy and satisfaction she gets in being a part of these amazing stories.

I was crying just watching the panel and hearing everyone’s stories. How much do you cry when you are working the show?
CAT:    So much! The thing is, it’s not pretty crying either, when I do. It’s like vein popping in my forehead, and my nose running on to my wobbly chin. Like it’s not pretty. Actually, that was one of those things were before I started doing the show, I thought: “What if I completely lose it? What if emotion gets the best of me and I don’t know what I’m going to do?”  You’re suppose to be able to do a good job. I just think that how I approached it was kind of: whatever you say or however you react or whatever you do, so long as you treat them real in the moment, it won’t matter anyway. It will be exactly the way it should be.

Just an honest reaction.
CAT:    Exactly! And I think that’s the only way you can approach it. I really I enjoy human beings. I like people, I like hearing their stories. I like knowing what makes them tick. I like understanding whey they’re the way they are or what they want to achieve. I like learning new things from them. So this is kind of the perfect show.

It is a very hope-filled show and that’s something we’re all kind of craving right now in a world that doesn’t seem very hopeful.
CAT:    It’s really, really nice to see some human beings who inspire you and who help you remember the good in human beings — and sometimes when they go through the darkest times that is when they shine the most.  That is when they become the best versions of themselves. It’s about finding that moment — and its really hard. I think it’s something anyone can identify with and empathize with. I think we’ve all been there at some stage. Like they kind of felt slightly out of control, or didn’t say things when we wanted to, or we’re unhappy.  It’s about taking action and becoming the master of your own destiny. I think that is what the show is all about.

Do you task your agent with finding shows where you can do that?
CAT:    No, not always. But it’s got to be something that I want to go to work in the morning and I know I’m going to enjoy it. I love the premise of the show. They told me the idea and it intrigued me. It’s’s a great idea and it’s perfect for this time. I love the idea of it being split-second later to see if they did it or didn’t.  When I watched the show when in the U.K.,the last participant on the U.K. show was a guy who struggled with a stutter his whole life.  His challenge is that he was going back to school to give a speech and it was just incredible. Just to see how right from the beginning, as a boy, he had struggled so profoundly to be able to communicate with other human beings in a way that must have been so frustrating for him. Then he went back and he managed to do it.  It was so “Dead Poet’s Society,” like “Captain, my Captain.” It was amazing.  I sat in my bed and just cried and cried and cried. I thought, “Well, if that does that to me, it’s going to do that to other people at home too” —  and I think we all want a bit of that right now. It’s not all tears. Some of it is: “I want to be a mermaid” or “I’m a unicorn, who wants to find love” or “I think I might have a doppelganger whose on the Campbell’s Soup can” — like there’s light and shades to everything. I think that’s great. It’s to embrace all different types of trials and tribulations, and problems and challenges, and that’s what keeps the show interesting.

Do you get to participate in the selection of the candidates on the show?
CAT:    No, I actually don’t. I don’t do any of that.  I think it is very important that I need to go on the same ride as the audience. I don’t want to know how they’re doing along the way and the show doesn’t help them. So we don’t supply a trainer, or psychiatrist, or anything like that. I think the way the show does help is that it makes them accountable for the challenge they set for themselves. Sometimes it takes us to say something publicly, a declaration, so that when things aren’t going well, you remember it and you think, “I’m not just going to give in. I’ve said it and I’m going to do it. I’m going to be a man or woman of my word.” Some people do it and they come back, and some people don’t do it and they still come back. Then some people are halfway through because perhaps it is taking them longer to achieve their goal than they thought, but they are on the right road. Then some people don’t come back, and I think that is because is maybe they don’t want to address the fact that they haven’t succeeded yet.

Do any of those haunt you because you met them and yet they did not return?
CAT:    You do tend to remember people. There are people who do stick out. There are also definitely people that you see and you go, “I think they’re going to do it” or “I’m not sure they’re going to do it.” It’s never a case of “I don’t think they can do it.”   It’s: “Are they ready to do it at that point in time?” It’s got to be the right time for people to make that big change.

What would you say to somebody who wants to be on the show? What would be the things they need to consider before they come to the show?
CAT:    The big thing is: “You have to be ready to be accountable.” If you’re going to stand there and say, “This is what I’m going to do.”  Then there’s no going back. There is no going back or get on the right path. I think sometimes some people need that kind of kick to get them going.

During the panel, you mentioned a lady who wanted to change her career and she hasn’t quite obtained that goal yet. Is there an opportunity for her to come back after a little while?
CAT:    Absolutely! We always say to people, “Look, maybe it’s not this time next year, maybe it’s this time next, next year.” For her, it was important to her that she was setting a positive example for kids. She didn’t make it that time, but she still goes back and trains twice as hard and she’s going to try again. That’s just what you have to do in life and sometimes you can be the best you can possibly be, but for whatever reason, it just doesn’t work out. The timing is not quite right.

That was the story of Abraham Lincoln — he ran for public office over and over again and he failed and failed and failed —  it just took that last time for him to become president.
CAT:    Exactly. I think that there is something very noble in that too. I think you’re absolutely right that during these times, we feel like we need to see something a little bit inspirational.

People have all kinds of wild ambitions and things they want to accomplish. To narrow it down a bit, before anyone applies to be on the show, what would you say the “goal posts” are?
CAT:    To be honest. If they think they can do it, we want to hear about it. I mean we want to follow the entire challenge, and we’re rooting for you. It’s not like we go, “Oh well, that’s fine.” It is more like, “We’re rooting for you here. We’ve got your back.”

And all unicorns are welcome.
CAT:    [Laughs] Unicorns, mermaids, any other mythical creature you would like to try out. We will be rooting for you.

After such a lively and entertaining panel promoting the show, it is clear that there are some precocious children appearing on the show.
CAT:  [Laughs] I think we were very much upstaged by some children in the most fabulous way possible. I think that’s one of the great things actually about the show — the casting people have done an amazing job, finding some great, great human beings. That maybe are just facing adversity, they have these issues, they make these challenges for themselves but they still retain a sense of humor, like Sarah and Dan [Krieg] are just incredible.

They also seem very happy to share their story. I find it incredible that they have not put up a wall about their deeply personal experience.
CAT:    Absolutely, and I think it’s great. I think they’re really inspirational.  I think that when you see people going through things like that and being able to retain that sense of humor, I think you can’t help but feel admiration for them.

To meet the Kriegs and see their remarkable story, as well as meet all of the extraordinary people who share their goals and achievements, be sure to tune in for all new episodes of THIS TIME NEXT YEAR, which airs Tuesdays at 10:00 p.m. on Lifetime.