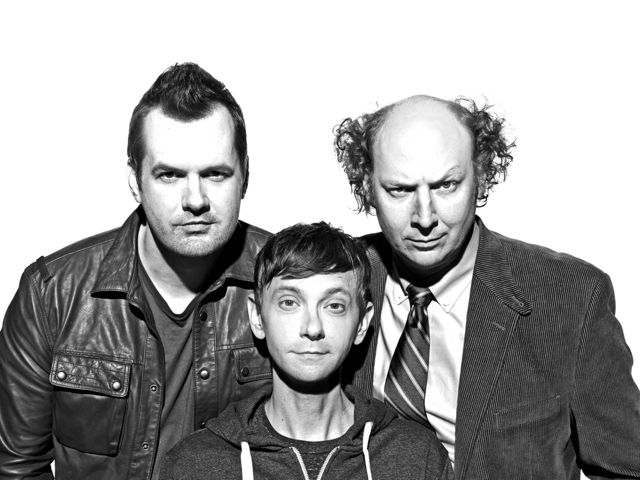 LEGIT’s second season begins on FXX this week with “Loveline.” It’s as much a continuation of the first year as it is a fresh tale. Jim (Jim Jefferies) appears on the radio show Loveline with Dr. Drew Pinsky (himself). During and after this appearance, past girlfriends haunt him, while Dr. Drew attempts to convince Jim that he has a sex addiction and should seek help.

I love that LEGIT goes this route of continuation, rather than starting over. It provides a cohesion and through-line between the two seasons, and even if you didn’t see the previous episodes, or your memory is a little fuzzy about them, there are still plenty of jokes that can be enjoyed with no background. It’s not the type of show to really do long arcs, but the inclusion of Peggy (Ginger Gonzaga) and Jenny (Bre Blair) are still able to hail back to the previous installments.

Even more of a connecting tissue is the movie that Jim got fired from after his highly inappropriate, but very funny, rape misunderstanding last season. The film is now in theaters, and it turns out to be very, very good, much to Jim’s dismay. This provides no end to the humor at Jim’s expense.

A theme of “Loveline” seems to be ‘poor Jim.’ The main character in LEGIT is likeable enough, but he also has his flaws. He can be selfish and self-absorbed. “Loveline” shows us a different side of him, the kind that unfairly suffers from circumstances often outside of his control. It makes him more sympathetic, and even when he looks a bit pathetic, you still root for him to do well, something that isn’t quite always the case in previous entries.

Of course, that’s not true of everything in the half hour. There is at least one scene in which Jim lies to get what he wants, something we’ve seen is part of his nature. But mostly, this premiere finds Jim more accessible and easy to get behind than before.

Even Jim’s sex addiction issues aren’t an indicator of Jim being bad. For one thing, we’re only told about the worst of his actions. What is shown is actually relatively tame. We know he’s screwed up, but I’m not even convinced that Jim needs help. He may just need to find the right person.

Playing it down could actually backfire. LEGET gets well-deserved credit for the handling of some sensitive issues, especially in the way it portrays people with disabilities, both physical and mental. If the sex addiction story is made light of too much, without any real consequences or development, then it could do disserve not only to that problem, but also the character of Jim.

What I like about LEGIT is that it features fully formed characters. Billy (DJ Qualls) is so much more than what one might expect at first glance, and Steve (Dan Bakkedahl) has plenty of problems and idiosyncrasies, too, his alcoholism brought up again in “Loveline.” Jim can be unfeeling at times, but the way he takes care of Steve and Billy as much as he does proves his humanity and compassion for fellow men. Yes, the show is a comedy and needs to keep being funny, but it could also make the sex addiction thing a season-long plot that shows us something new in Jim.

That aside, though, “Loveline” is absolutely just as hilarious as pretty much any installment of LEGIT so far. It’s an edgy, different show with a specific voice and perspective not often shown on TV. I greatly enjoy it, and this premiere is true to the established form. It definitely bodes well for the coming installments.