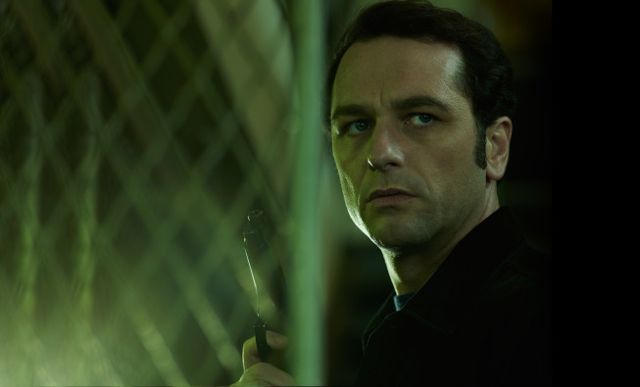 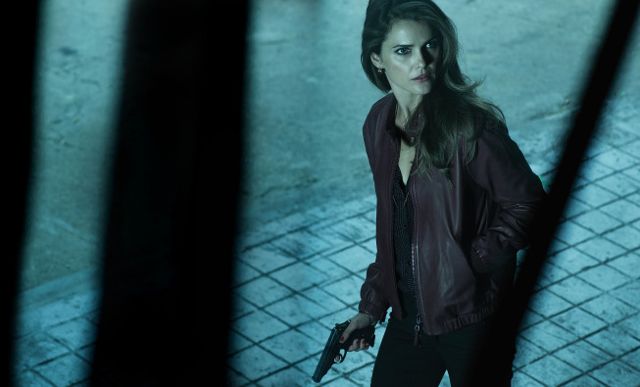 Tonight, THE AMERICANS returns to FX for its second season. The premiere, “Comrades,” pretty much picks up where the first year left off, in that all of the larger arcs are still playing out and nothing major has changed. “Comrades” begins with Elizabeth (Keri Russell) coming home, which makes sense to structure the hiatus that way because, without Elizabeth, there is no show.

Many fans are waiting to see how the relationships may or may not heal, and unfortunately, there’s little of that in the premiere, besides a very racy sex scene (by basic cable standards). Elizabeth and Phillip (Matthew Rhys) seem to be in a good place, but there isn’t a real focus on that. Their time spent together is in service to their mission or in front of their kids, so we don’t get a chance to see for sure what kind of footing they are on with each other. Phillip does not get the opportunity to stop and pour his heart out until he gets ‘home’ to his other wife, Martha (Alison Wright).

This worries me about Phillip and Elizabeth’s future. They definitely like each other and are committed to making their lives together work, but now Phillip is bonding with Martha, perhaps unintentionally, and under an assumed name to be sure, but still, he is making an emotional connection, revealing some of himself. As unlikely as the pairing may be, I could see something blooming there if this pattern continues past episode one.

I guess many affairs happen when one spouse doesn’t feel understood or heard by the other, finding solace in someone else. The situation in THE AMERICANS is anything but a traditional tryst, but I can see signs that it may turn into something resembling that. Which makes sense for the characters and provides much better drama. Or maybe I’m reading into something that isn’t actually there in those few small moments. I guess we’ll wait and see.

Interestingly, Stan (Noah Emmerich) thinks he’s having a real affair, hiding out with Nina (Annet Mahendru) instead of staying home and repairing his marriage to Sandra (Susan Misner). Yet, viewers know that Nina is informing on Stan to the KGB, trying to glean his CIA secrets, so she’s using him. So the setup in “Comrades” is that Stan thinks he’s in loving union but isn’t, and Phillip thinks he’s not but may be. This is some pretty interesting writing.

More tantalizing, though, is that realization by Phillip and Elizabeth this week that their job may not be the one they need to be in to protect their family. So far, THE AMERICANS has kept the personal and the spy lives separate for its lead couple, which is how they want it. But events in “Comrades,” from an early accident in the opening scene, to later, more obvious twists, threaten to bring the two worlds together. This would not be good for anyone, and puts their children, Paige (Holly Taylor) and Henry (Keidrich Sellati), in danger.

Will Phillip and Elizabeth continue their lifestyle if their children cannot be safe? I know they are dedicated to the cause and willing to risk their own lives, but they’re also loving parents, and have natural parental instincts. It seems like this has the potential to be a total game-changer, a reason for them to shift position in their work. I don’t know for sure if anything will really come of this, but if nothing else, “Comrades” will get the characters and the audience thinking about the current status quo, and that’s enough for solid TV.

Of course, Paige is still suspicious of her parents, and so may drag them out into the open whether they want to be or not, or force their hands in making an important decision. But this plot is still early in its development, so it’s hard to say where it will go at this point.

And for those of you who watch THE AMERICANS for good, action-oriented spy sequences, there are those, too, in this premiere. Personally, while I like a good scene that can get the adrenaline pumping, I prefer character studies, and appreciate when the excitement is tied into meaning for the person involved, or changes their perspective in some way. This isn’t always the case in this show, but it does a pretty good job of balancing the two components, personal stories and suspenseful spy stuff, and “Comrades” should satisfy both camps.

THE AMERICANS airs Wednesdays at 10 p.m. on FX.