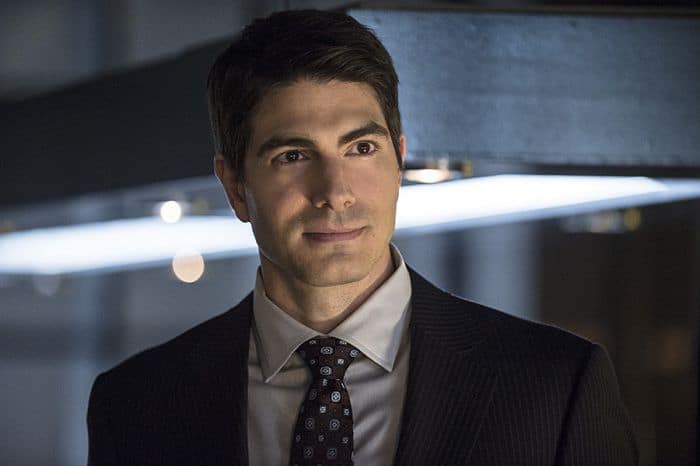 In a press interview from the set, star Brandon Routh talked briefly about Ray’s personal journey of self-discovery now that the Atom suit has been destroyed:

With the destruction of the Atom suit, is Ray going to be attempting to replicate it or create something else? What is his intent as far as that?
BRANDON: There’s no dwarf star alloy, so he’s kind of screwed as of right now. That becomes a story point in episodes to continue, but he’s going to be without a suit for some time and that gives him an opportunity to figure out this whole hero business. What it is to be a hero and if he’s a hero without the suit and all this kind of stuff comes into play very heavily in the next three episodes.

The intent behind his initial journey was to be a hero, regardless. He didn’t have the suit initially. He just had the intent to want to help.
BRANDON: Right. He created the suit in order to be more of a hero because he couldn’t effect change. He couldn’t take out the Mirakuru soldiers when they attacked the city and killed his fiance. His whole mission in life since 2014 in Star City — Starling at that time — was to create a suit to be a hero. He is without purpose and lost in many ways without the suit because that’s what made him, in his mind and everyone’s mind, a hero. So: “is a hero’s heart and a hero’s mind enough to effect change” is the journey he goes on.

Is it possible he could be reaching out to Felicity (Emily Bett Rickards)? She’s another person without imbued powers of some kind, and yet still assists in being a hero all the time.
BRANDON: You’re absolutely right. I don’t think that metaphor, that line, is drawn but it is very true. All good characters on these shows — except the villains — are heroes, in their own way, whether they have powers or not, but that’s Ray’s unique journey for these few episodes this season to strengthen that belief in himself.

What can you say about the mood on the ship once they realize the implications of the Atom suit being destroyed? Is it empathy? Or is it kind of a brush-off?
BRANDON: I don’t know if it’s a brush-off, it’s just out of necessity they move on. Ray kind of takes on different roles trying other things out for a few episodes. Trying to give purpose and to do that. Not a lot of time is spent reverently on it. Got to move on.

At the end of last week’s episode, Mick (Dominic Purcell) makes this gesture of giving Ray the Cold Gun. Does he embrace that? Is that something he wants to sort of pick up where Captain Cold (Wentworth Miller) left off, maybe?
BRANDON: I don’t know if he wants to be a replacement for Captain Cold, but he’s honored and touched by the friendship, the kinship and the trust. Whatever that is that made him bestow the gun to Ray and I think that’s the powerful thing about it. It boosts his confidence after he feels he’s lost at sea. It gives him a little bit of footing, grounding to get back to himself again. I think as the next episodes progress he feels more like maybe, “This Captain Cold thing is something fun,” or “try it on at least.”

Does he actually take on that name?
BRANDON: No, not that code name.

Last time we saw Wentworth’s character [Snart], obviously, he was dead. How might the team react to seeing him again?
BRANDON: I think if they saw him again, they’d be very shocked to see him, but at the same time, it’s time-travel, so we could go back to an earlier time and find him still alive.

This is not a show about romance obviously, but in close quarters things can happen. Where is Ray’s mind and heart this season?
BRANDON: It’s all about the mission and now it’s all about trying to get his suit back or figure out how to be here and contribute to the team. I don’t think there’s going to be any romance as far as I’ve been told. Which is probably, I guess maybe, for the best for Ray. He’s got enough on his plate right now to deal with.

How is Ray adjusting to having Sara (Caity Lotz) be the captain and in charge now?
BRANDON: I think he’s fine with it. When he brings up the fact that “we need to have a new leader,” I don’t necessarily think that he was, in episode 1 or 2 this season, putting himself up. He never thought, “Maybe it would be me.” I think even if he thought for a second that it could’ve been him — facing the reality of someone who’s battle-tested and knows how to do it, can think like that, and make split-decisions as far as tactics, she’s the one. I think he’s fully behind that, has no doubt about it and for me personally, I think it’s fantastic because she should. Not only because of all those things, but also to have, since we only had two female characters on our show, I think it’s really awesome, to have her in the leadership role, which is cool for many reasons.

To find out how Sara, Stein, Ray and Amaya all adjust to their rapidly changing lives and if it pulls them closer together or drives them farther apart, tune in for all new episodes of LEGENDS OF TOMORROW on Thursdays at 8:00 p.m. on the CW.