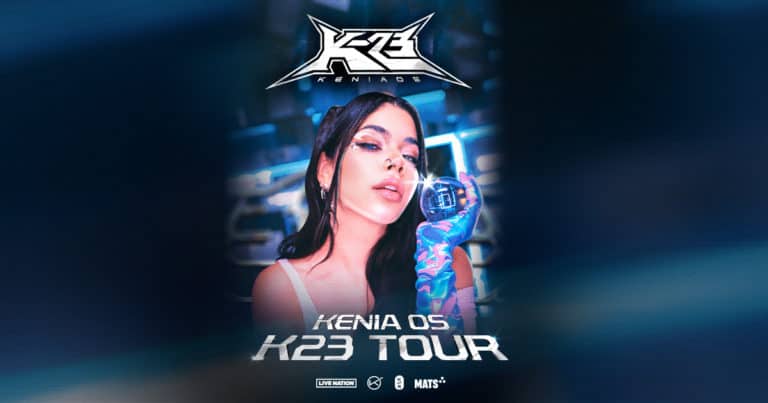 Produced by Live Nation, the 17-city tour kicks off on February 22nd in San Diego, CA at the House of Blues making stops across the U.S. in Las Vegas, Chicago, New York, and more before wrapping up on March 26, 2023 in Santa Ana, CA at the Observatory OC. Before hitting the road on the U.S. dates, Kenia Os will be performing across Mexico in partnership with OCESA and Apodaca Group, on Tecate Festival dates.

*Not a Live Nation Date

Kenia Guadalupe Flores Osuna, better known as Kenia Os, was born in Mazatlán, Sinaloa, Mexico on July 15, 1999. In 2018 she emerged as a singer by opening her channel “K Os” and releasing her first singles titled “Por Siempre” and “Bonita.” At just 23 years old, Kenia OS is a singer, business woman, and one of the most important content creators in Latin America.

Throughout 2019 she continued with solo releases, adding more than 165 million reproductions in different digital platforms. In 2020, Kenia Os became one of the most promising Mexican singers of her generation, releasing numerous singles, including “Cócteles”, a song that currently has more than 75 million combined reproductions on different digital platforms, earning different awards and nominations such as: MTV Miaw, Kids Choice Awards, Eliot Awards, Heat Awards, Tú Awards, Eres Awards, Like Brasil Awards, among others.

At the end of 2020, Kenia Os made her debut with her first EP entitled “Canciones Pa´ Mi Ex. Vol. 1,” which was among the 10 best albums by female artists in Latin America.

In 2021 she founded her own record label “K Records” in which she began to distribute her independent music. In the television world, she debuted as a host alongside Kali Uchis at the MTV Miaw 2021 awards. Despite not having solo singles in 2021, she has had numerous collaborations with Mexican artists including; Leon Leiden and Ghetto Kids, Thalia, CNCO, and Ha*Ash, among others.

Finally, after signing with Sony Music in 2022, Kenia released her debut album “Cambios de Luna” which debuted at #6 globally on the Top Albums Chart on Spotify, making it the highest charting debut by a Mexican Artist, consolidating her as one of the most relevant musical promises in Latin America. Kenia Os has recently signed with MATS Agency, the union of three prominent Mexican entertainment companies: Apodaca Group, Mano Booking and TSM, now operating worldwide promoting Latin American culture.