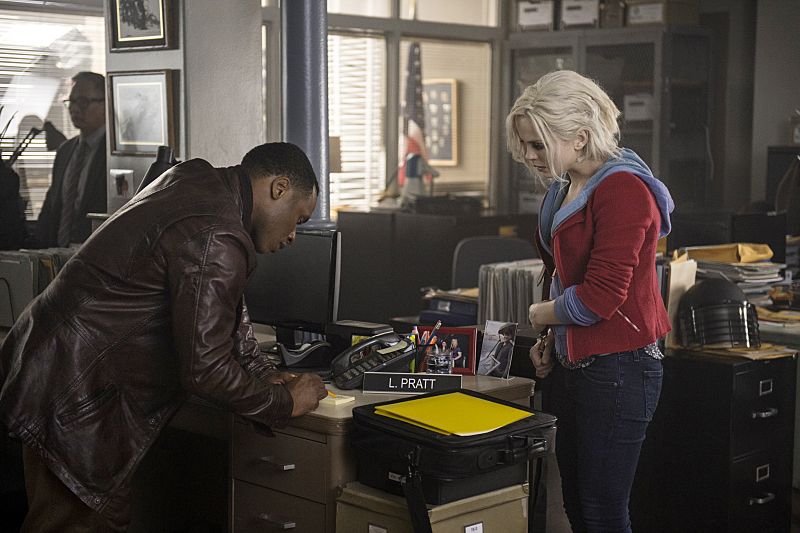 The CW’s newest drama, premiering this week, is called iZombie. The show begins when Liv Moore (Rose McIver, Masters of Sex, Once Upon a Time) is accidentally turned into one of the undead at a party-gone-wrong. Not knowing if there’s anyone else like her out there, she decides to hide what she’s become from her family and friends, who just think she’s grown lazy and pale, and even break off her engagement. Blurting out a special gift she finds in front of the wrong person, though, may just give her a new purpose.

The first thing that strikes me about iZombie is that is feels remarkably similar to Veronica Mars. This isn’t surprising, given that the series is created by Mars’ Rob Thomas, but everything from the snarky main female who gives voiceover, to the types of guest characters that pop up, to the tone and music, are nearly cloned from Veronica. This is strange, given that iZombie is based on a comic book and not Thomas’ original creation, but his influence is felt very heavily throughout.

Now, I do not observe this as a complaint. As a big fan of Veronica Mars, one who misses it frequently and can’t get enough of the new books and movie, also by Thomas, that continue the story, I am happy to have a show just like it back on television. The format, one in which Liv helps the police department solve cases, is similar to Veronica’s role as a private investigator, so that makes sense, too.

The major difference, at least in the pilot, is that iZombie is far more procedural. While Veronica spends a season looking into a case, Liv helps Detective Clive Babineaux (Malcolm Goodwin, Breakout Kings) catch the killer in a single hour. This is a disappointing departure, with the structure of the crime laid out in a predictable fashion. Liv’s ability to absorb skills and memories from the brains she eats, stolen from the victims in the morgue, could certainly help Clive with more cases. Should iZombie do this week after week, rather than developing any larger arcs, iZombie will quickly grow stale and lose its season pass status on my TiVo.

There are a few signs that iZombie could be serial. Liv lives with a roommate, Peyton (Aly Michalka, Hellcats), who wants to ‘fix’ Liv since she quit being a doctor to work in a morgue. Liv’s ex-fiancé, Major (Robert Buckley, One Tree Hill), is still in her life. Her boss, Ravi (Rahul Kohli), quickly figures out her secret and is dedicated to investigating the medical side of her situation. The man that made Liv who she is, Blaine (David Anders, Alias, The Vampire Diaries), is still out there and may have some answers. Each of these provide possible tales that can be explored in extended fashion.

I also like iZombie’s homage to its comic roots and its take on zombies. Liv is not like any other undead character I’ve ever seen, thus meaning viewers won’t immediately know what’s happening to her. The brain-eating aspect is not unique, but what happens to her after the meal is. She seems able to live a relatively normal life, as long as she consumes brains periodically, and her diet is light enough to not draw too much suspicion. The choice to make her condition a virus, which could one day be cured, makes sense and gives her motivation. I love The Walking Dead dearly, but I’m glad this is not that.

In short, iZombie seems poised to be one of the best made, most entertaining, boring procedurals out there. Hopefully it embraces its Thomas-DNA more fully and casts off the strict structure. If it does, I’m prepared to like it a lot.

IZOMBIE premieres this Tuesday on the CW.