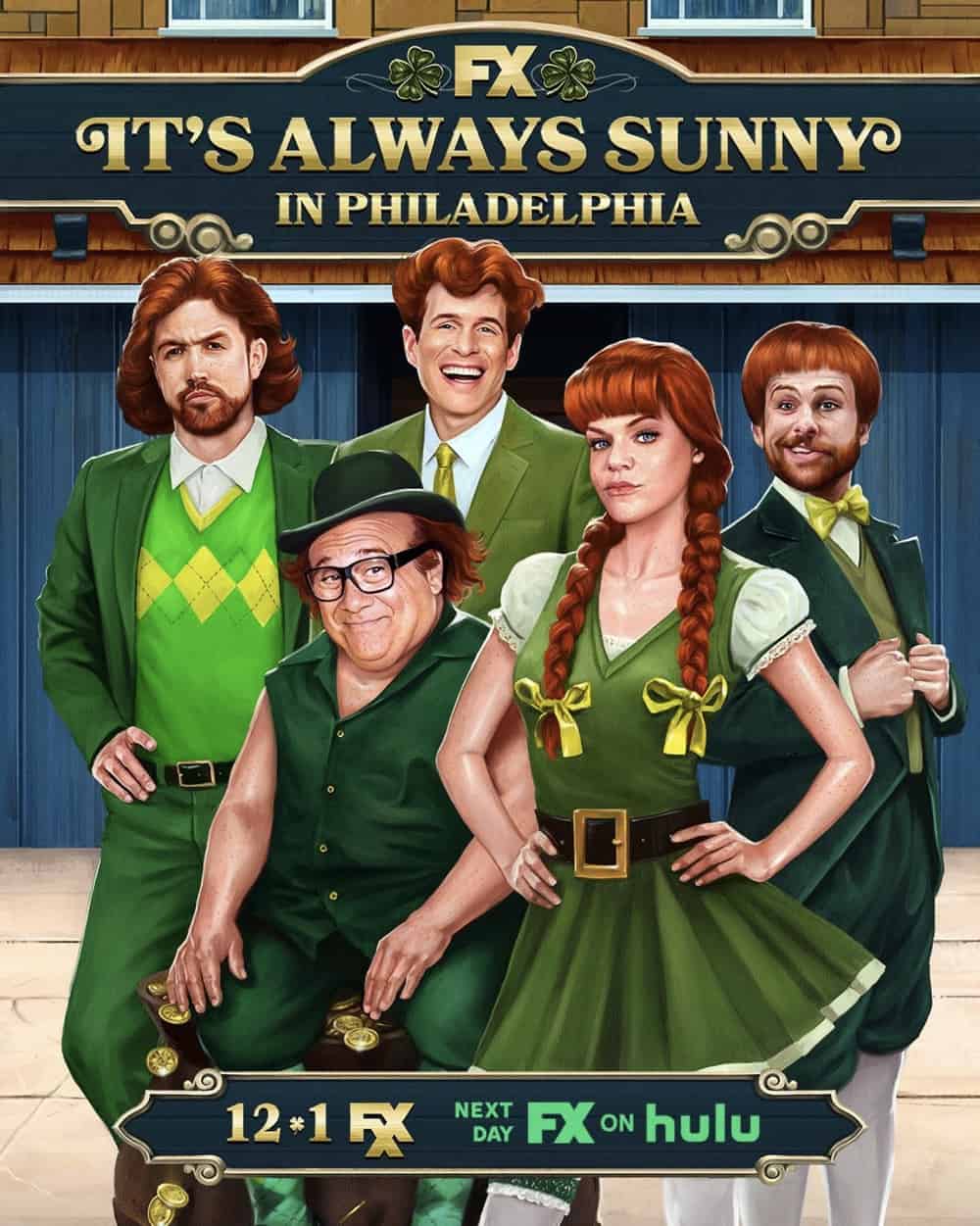 It’s Always Sunny in Philadelphia’s record-breaking 15th season will premiere Wednesday, December 1 at 10 p.m. ET/PT on FXX, and stream the next day on FX on Hulu.

The premiere will include the first two episodes of the 15th season, which makes Sunny the longest-running live-action comedy series in television history, bypassing The Adventures of Ozzie & Harriet. Sunny’s remarkable run has also racked up more than 1.8 billion hours viewed since its premiere in 2005.

The record-breaking 15th season of It’s Always Sunny in Philadelphia is its most ambitious yet. In the seismic wake of Covid-19 and all things 2020, The Gang stands at a crossroads in this strange new world. The rules are changing quicker than anyone can keep up with, despite herculean efforts from “Mac” (Rob McElhenney), “Charlie” (Charlie Day), “Dennis” (Glenn Howerton), “Dee” (Kaitlin Olson) and “Frank” (Danny DeVito) to continue business as usual. Now, they must face the music and decide who they’ll become in the cultural upheaval that is 2021. Across the span of eight episodes — and the Atlantic Ocean — we find them answer in a way only they could think to.

Like a fine Irish whiskey, Sunny’s distinct flavor has gotten richer and intensified through the years. First barreled in 2005, the show has become a landmark for dark comedy and American satire, uniting the most devoted of fans from all over the country and abroad, and this monumental 15th season is truly one to crack open and celebrate. Continuing to deliver some of the hardest laughs on television while tackling society’s most pressing issues, Sunny turns its fearless focus both outward and inward: to a national and international level but also to a deeply personal level. This is a season that sees The Gang try to exploit pandemic aid, sidestep cancel culture, evade criminal justice, reflect on their origins, and reconcile their identities and homeland roots.

Oh, and did we mention this is season 15? Sunny now breaks the record and becomes the longest-running live-action sitcom of all time. The show is executive produced by McElhenney (creator), Day, and Howerton, along with David Hornsby, Megan Ganz, Rob Rosell, Nick Frenkel, and Michael Rotenberg. None of this could be possible without the unyielding faith and courage of FX, who took a gamble on a small, homegrown show and now have cultivated one of the most vital, boundary-breaking comedies in American history.

So, raise that snifter and cheers: To Sunny! Yes, it burns a little, and that’s what you want.