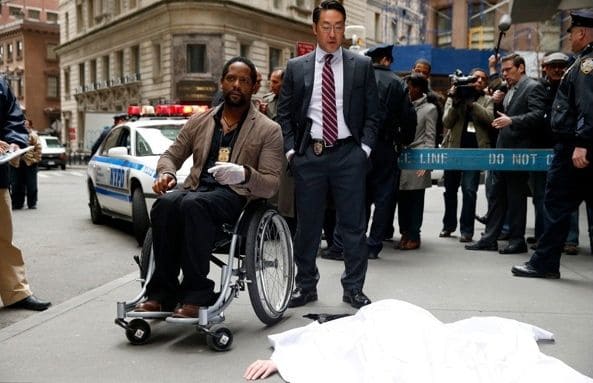 NBC’s newest drama is yet another remake of an old series. IRONSIDE is based on the 1967-1975 show of the same name, which starred Raymond Burr as a detective confined to a wheelchair after a sniper bullet paralyzes him. In the new show, updated somewhat for modern sensibilities, Blair Underwood (The Event) plays the titular cop, a disgruntled man who doesn’t play by the rules, but gets the job done.

The premise for IRONSIDE is lame. We have a ton of police procedurals on the air, and we surely don’t need another unless it adds something very new to the genre, as some cable networks are currently doing. A remake of a show better suited to another time is a bad idea, even if the new Hawaii Five-0 has done well for CBS, because it does even less to try to craft something original.

The wheelchair seems gimmicky, especially because of the title. Yes, Ironside is also the name of the character, but it implies something different when you see him in the metal wheelchair. The fact that it is copying the original series only slightly makes this less offensive or corny.

There has been some controversy among the disabled community for the casting of Underwood, rather than someone who actually uses a wheelchair in their everyday life. After viewing the “Pilot,” which has quite a few flashback scenes prior to the shooting, the reason for the casting choice seems clear, though, and while there should be more parts for disabled actors on TV, or disability-blind casting, it’s understandable why IRONSIDE goes a different direction.

Early in the “Pilot,” Ironside breaks the rules, psychologically torturing and physically hurting a suspect. The obvious assumption is that Ironside has some anger issues because of the accident that put him in the chair. I applaud the writers for going a different directly, establishing that he was always reckless and insubordinate, so his inability to walk, while surely causing some emotional challenges, did not majorly shift his personality.

The problem is, someone who does their own thing and ignores authority, yet still succeeds, is yet another trope on modern television, especially in procedurals. There are already a ton of characters just like him in other shows, and so another one is not needed or appreciated.

Ironside goes off the rails a couple of times in the first hour alone, and while his boss, Ed Rollins (Kenneth Choi, Sons of Anarchy), grumbles, there are no consequences. Even House had the wisdom to punish its lead now and again, but then, House was a good show. This feels ridiculous and completely unrealistic, leaving discerning viewers wondering how Ironside possibly has a career.

As the “Pilot” makes clear, IRONSIDE will be standard case-of-the-week fare. We see Ironside, along with fellow officers Holly (Spencer Grammer, Greek), Virgil (Pablo Schreiber, Orange Is the New Black), and Teddy (Neal Bledsoe, Smash), go after a man this week that they blame for a girl’s suicide, which may be a homicide instead. It unfolds just as one would expect, with suspicion shifting a couple of times, clues being uncovered, and the guilty party being caught. Yawn.

The one interesting plot in the IRONSIDE “Pilot” is that of Gary Stanton (Brent Sexton, The Killing), Ironside’s former partner. Gary is taking the shooting much harder than Ironside, despite Gary coming out of it physically unharmed. We find out why at the end of the “Pilot,” and there are a couple of scenes that show what Gary has become and what he plans to do about it, or not do. This is an intriguing journey that would make for a cool premise. Unfortunately, it’s a side bit, not the focus of the show.

Now, if you like a procedural, and some do, IRONSIDE seems well made enough. It’s got a wonderful cast, being wasted on this rote work, and the pacing is fast and stays interesting… for a single episode. The problem is, it looks to be a same-thing-every-installment type of series, and there really is no excuse for these anymore in a golden era of amazing visual storytelling. Other than the excuse of ratings and ad dollars, which, unfortunately, is the purpose behind TV networks. If IRONSIDE is an hour NBC has to sacrifice to keep better stuff on, I guess it’s worth it. But it could be so much better.

IRONSIDE premieres Wednesday, October 2nd on NBC, and the “Pilot” is available now on Hulu.