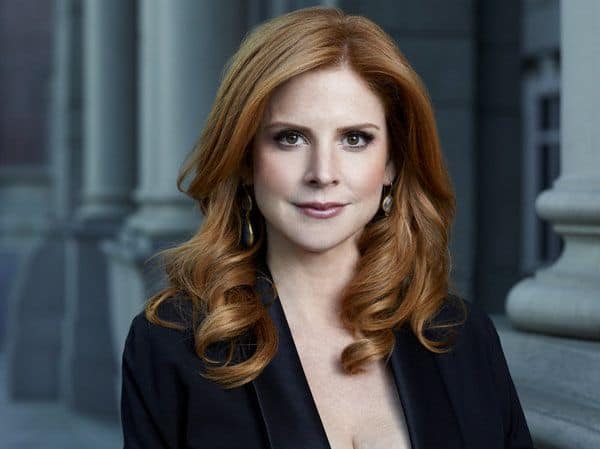 Recently, I had the opportunity to speak with USA SUITS star Sarah Rafferty. Sarah plays Donna on the series, Harvey’s almost perfect assistant, who is usually right. But recently, Donna was wrong, and her action resulted in her being fired by the head of the firm, Jessica.

Having met in Sarah in Toronto a few months ago, I can attest you would be hard-pressed to find someone more gracious and warm than her. This feeling was formed in person, and was certainly reaffirmed by this phone interview.

During our conversation, Sarah talks a little about being a mom, and mostly about Donna and what is coming up next on SUITS. After exchanging some very nice pleasantries, we got down to business.

The first thing I want to ask you is, did you know if, when Donna got fired, you were going to stay with the show? Did they tell you ahead of time that this was happening?

They did tell me ahead of time. It was kind of funny how I found out. We all went out to dinner, the cast, all the producers and all the writers, before going up to Toronto to start shooting. As I was on my way out the door, Aaron Korsh, our creator, and David Bartis, our executive producer, stopped me because, at the dinner table I had said something like, “Well, Donna’s always right.” Then all the writers kind of started laughing. I’m a little bit a paranoid. I’m like “What are you guys smirking about?” And so, after the dinner was over, they told me that Donna was going to get fired and I actually started to shake. I was seriously nervous on her behalf.

Did they make you doubt your job security at all?

To be honest with you, yes and no. They made a joke that could have made me feel concerned about my job security, but they were just messing around. Before I left for the evening, I knew that Donna would return.

Of course. She’s such a popular character, losing her would just kill the show.

Well, you have that initial adrenaline rush when they first told me, like “What? Oh my god!” I was getting nervous as if I was being told I was getting fired, in a weird way.

So you have quite a bit of personal connection with the character?

Yes I enjoy my job. I don’t want it to go away.

Did you enjoy having your week off when they were filming this past week’s episode?

Yeah, it flew by. With two kids at home, a week off is not a week off. Sometimes I feel like going to bed is more of a break.

What do you think Donna was up to during her time away?

It kind of comes up in the next episode, which airs this Thursday. She definitely was working out and having some meetings. She may have had to reach out to a lawyer on her own, because, you know, she’s in real trouble.

Do you think she’s more sad at the turn of events, or do you think there’s some anger there, especially directed towards her co-workers at the firm?

I think she’s angry and disappointed in Harvey. I think she understands why Jessica had to do it. She’s not stupid. She knows how bad it was. But I think a lot was silently said at the elevator bank between Harvey and Donna. She knows she messed up, she feels horrible about what she did, incredibly guilty. She’s worried about Harvey, but she also has to be worried about herself. She may have expected Harvey to fight for her.

Have you talked to Gabriel [Macht, who plays Harvey] at all about how he felt about this plot?

Oh, well, Gabriel and I have just talked about it in terms of how funny and cool it is. We’ve been hashing out the scenes we’ve had as a result. They scenes that are actually coming up bring up a lot of questions about their back story, their past. So we’ve had conversations about that, too.

Are we going to get to see some of their past here soon?

We are going to get to see some of their past because we get to have a flashback episode, which is so fun! You get to see everybody five years earlier. We see Mike well before he was at the firm. We see Harvey before he was a senior partner. We see Jessica and Hardman when they were there running the firm together, before he exited the first time, which is cool. And Rachel when she’s just starting out.

Neat! I’ve enjoyed Donna getting to interact more with Rachel, and there were some great scenes with Mike in the first few episodes this season. Are there some good Donna and Louis scenes coming up?

Yeah! I’m always hoping there are Donna and Louis scenes coming up. I think that the way that they mess with each other is really fun. Rick [Hoffman, who plays Louis] and I have a really great time with that. Coming up, it’s much more serious. This season, as you can already tell, having seen the first six episodes, things are more complicated, and a little bit darker, and a little bit messier. For Donna and Louis, it’s not comfortable for the two of them in the next few episodes.

As much as one might wish for their character to have a happy life, do you look forward to those tough scenes, those difficult scenes, where things get really uncomfortable, just because it allows you to stretch as an actress and really show your skill?

Absolutely. It’s so fun to collaborate on those scenes with the other actors in the cast. I mean, that’s what was so exciting for me when I heard from Aaron that Donna was going to get fired, and that the relationship with Harvey was going to become messier. Basically, season two would be about things getting uncomfortable and messy and darker. I think we’re really excited about that because you can really dig in to something juicy.

Do you think after this darkness, there’s going to be a little levity to wash away the storm clouds?

(laughs) I really wonder. I’ve only read through episode ten, so there’s six more after that. Episode ten is a bit off a cliffhanger, and I’m really wondering what’s going to happen. There’s an opportunity for things to get deeper and darker, but I do think the show will always have that lightness to it. There’s always a place for that. That’s just part of the formula of the thing, and part of who the characters are. They have that wit about them.

Have you got on the internet and read any of the feedback about your character’s plot and what’s going on this season?

I saw a couple of things. I’m on twitter [@sarahgrafferty], and I don’t get a chance to read everything, but I saw a few protests to Donna’s exit. I saw an open letter to the Suits producers that was like “I’m not OK with this Donna situation.” That was really funny. And there was the hash tag #savedonna. I just thought that was so cool.

Do you have any other projects coming up that you want to talk about, besides SUITS?

Nope. I’m just doing SUITS right now. That’s pretty much all I can manage. I had a baby at the end of January, and then went back to work seven weeks later. And I have a four and a half year old, so things are pretty busy right now.

(laughs) I’ve got the Parenting Project going on, and SUITS, so I’m pretty happy. Pretty happy and pretty tired.

Thank you so much, Sarah, for taking the time to speak with me, and giving us the scoop on Donna!