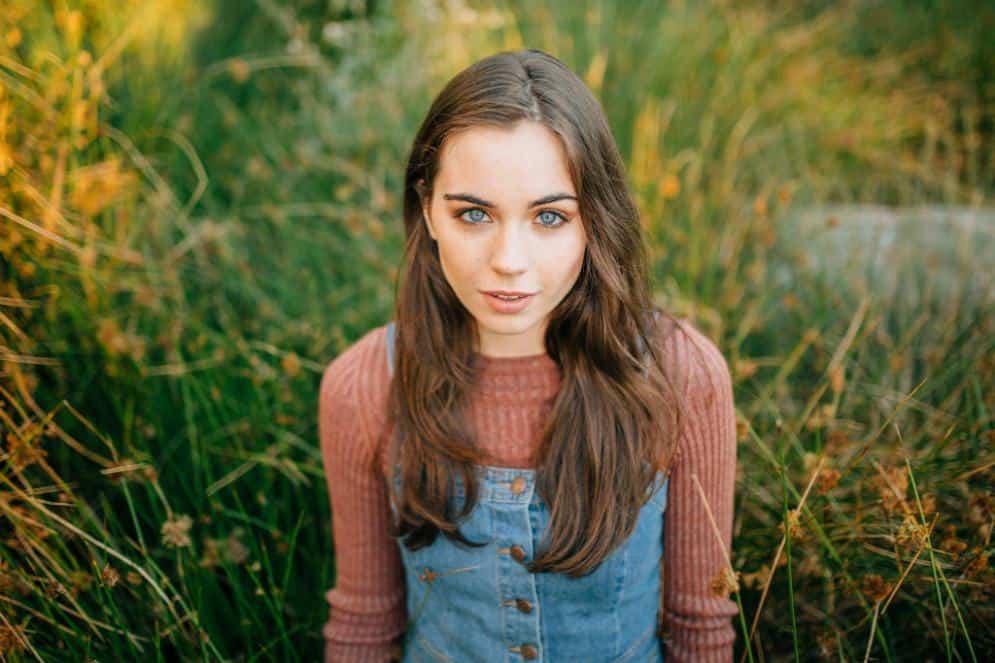 In the new YouTube Red original series, a young woman named Henry (Maddie Hasson) discovers that she has the supernatural ability to teleport. Unfortunately, the circumstances surrounding that discovery are terrifying and she is uncertain who she can turn to as she tries to ascertain how her teleportation ability works. Sarah Desjardins costars as the only who might be the only one who Henry can turn to — Henry’s step-sibling Jenna. In an exclusive interview Sarah previews her role in this dark thriller series and shares a bit about what it is like to be a young working actor in Hollywood.

What was the initial appeal for you about portraying Jenna and working on YouTube’s IMPULSE?
SARAH: The big appeal for me in having the opportunity to work on IMPULSE and to play Jenna definitely grounded the powerful story we are telling. The piece as a whole and also Jenna’s journey specifically. Not to mention we are put in this heightened, otherworldly scenario and how it was handled in the script was something I wanted to be part of.

How would you describe who Jenna is in the series?
SARAH: When we meet Jenna, we are led to believe she is one of the popular crowd. Therefore, stereotypically shallow, pretty and maybe a little mean spirited. She is so much more than that. Once Henry [Maddie Hasson] is in danger her true colors shine through. She is a loving, compassionate girl. She’s also a huge science nerd which she is sometimes embarrassed by. So much of her past has shaped her and her relationship with her dad. She wants to take care of him and make him proud as they’ve both been through so much. Although, Jenna isn’t quite sure who she is. She spends so much time focused on others and not on finding herself. That will be explored this season.

What do you most admire about her?
SARAH: What I admire most about Jenna is her determination and her compassion for others. She is very intuitive. She can sense when Henry needs her even though she can’t say it and works to get through to her core.

What is it like working alongside the talented ensemble on IMPULSE?
SARAH: Not only is this entire cast ridiculously talented but they are also wonderful, humble, beautiful people. I still can’t believe I get to be a part of this amazing family and have them all in my life. Everyone in this ensemble has become a trusted friend and getting to work with them every day was a gift.

Portraying Jenna, you get to work with Maddie Hasson who portrays Henry, Jenna’s step-sister. What is that experience like?
SARAH: Maddie is such a gifted, quirky, hilarious, intellectual, gorgeous human. It’s a huge stroke of fortune I get to go on this journey with her. One of the most giving scene partners I’ve ever had, and we truly connect as people off camera which is so important for our connection on the show.

How would you describe the dynamic between your characters Jenna and Henry?
SARAH: You could almost say Henry and Jenna are the “Will they or won’t they?!” of IMPULSE. When we meet Henry and Jenna they are polar opposites. Quickly however, certain events change this dynamic. Henry needs someone, and Jenna is more than willing to be that person for her. Unfortunately, Henry doesn’t know how to accept love or help from another person. As the season progresses they get closer, then further apart, then closer together again. It’s an interesting push and pull.

Any favorite scenes that you can share from working on the show?
SARAH: There are honestly so many amazing moments I’ve had on this show. Jenna goes through a lot of firsts that were fun to explore. Any scene with Maddie was an effortless connection. Also, any scene with the majority of the cast was amazing to shoot because we would all goof off together and have a good time! (And get work done…)

What challenges did you face working on the show and how did you overcome them?
SARAH: There is a lot of serious subject matter on IMPULSE and varied representation of different communities. It was very important to all of us to represent these people with as much accuracy and respect as possible. We researched, talked to these different communities and we hope with all our hearts they feel they are properly represented in our show.

Has IMPULSE left an impression on you in your life? If so, in what way?
SARAH: Working on the show provided me with a lot of things in my own life. Through the experience of working on this first season I really found who I was and came into myself. I found my independence, more confidence and an opportunity to do what I love to do and tell a powerful story.

Then as an actor, what has been the one thing you have taken away from the experience of working on IMPULSE?
SARAH: As an actor I learnt a lot. My career is just ramping up and I got to work with all these absolute pros! I get to walk away knowing we all made something powerful, well executed and meaningful. IMPULSE contributes to a very important conversation and I’m grateful to be part of it.

What is your proudest achievement working on IMPULSE?
SARAH: It’s my first experience being an integral role in a series from the ground up and that is definitely my proudest achievement. It’s a lot of work. The absolute best kind. I can only hope we get to continue!

What has surprised you most about your career so far?
SARAH: Definitely how much it has progressed. If I told six-year-old Sarah what she was doing now, she wouldn’t even be able to comprehend that it was possible. Acting seemed like an impossible dream at a young age but with a lot of hard work and dedication it has turned into a career I am beyond lucky to have.

At this stage of your career, what do you think you have learned from the roles and projects you have worked on?
SARAH: I learn something from every single job. It may be about my acting as a craft, but I’ve also been learning lots about the technical side of things too! I would say that overall, I have learned that you never stop growing, developing and learning new things. It is so important to be open to that at all times.

Then what are the perks of where you are in your career right now?
SARAH: The biggest perk is that my journey is truly just beginning. I have so much ahead of me to look forward to and who knows what comes next! All I can do is be open and prepared for whatever amazing opportunity comes my way.

What advice would you offer to other upcoming and aspiring actors?
SARAH: My lovely acting coach Deb Podowski, who I train with in Vancouver always says, “What you put into this business you get out.” Every ounce of effort counts. Fight for what you want with all the passion and dedication inside you. Let it drive you and it will all come around eventually.

At a time when women’s voices are rising to be heard and respected around the country and world, what do you recommend your fans do to lend support in that endeavor?
SARAH: As women, we all need to support each other. That’s the best thing we can do. To make each other feel heard. We also need to treat everyone on this planet with the same amount of respect we expect to receive ourselves. The world will be a much better place.

Do you have any other upcoming projects that you can share that fans should keep an eye out for?
SARAH: IMPULSE comes out June 6th on YouTube Red. I am so proud of this show and hope you will give it a try. My soul hopes to continue with these characters but for now I am awaiting whatever opportunity I’m lucky to be given next.

To see how Jenna becomes a pivotal part of Henry’s journey and carves out her own vital role in their supernautal world, be sure to tune in for the premiere of IMPULSE on Wednesday, June 6th, when the entire series will be available for binge-watching on YouTube Red. To get sneak peaks and information about the show, you can follow it on Twitter @ImpulseSeries. Then to find out more about Sarah as her career grows, you can also follow her on Twitter @SarahDesjardins.