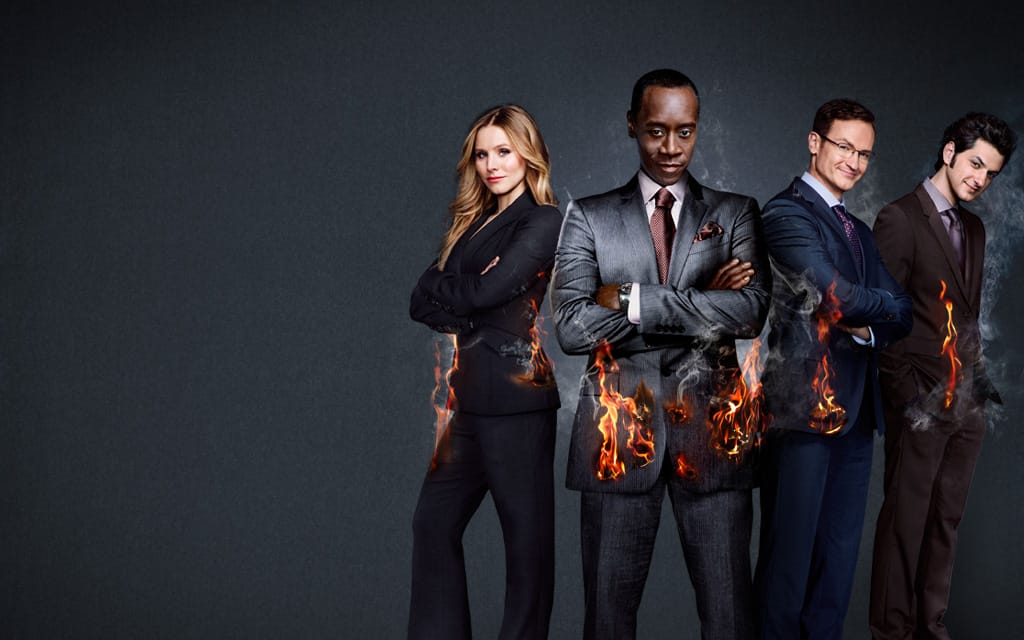 Showtime’s HOUSE OF LIES is back for a second outing this Sunday, January 8th at 10 p.m. In the premiere, “Stochasticity,” Jeannie (Kristen Bell) finally returns to work after her “vacation.” It’s perfect timing, as new boss Julianne (Bess Armstrong, My So-Called Life) is instituting some female-empowering new changes, which comes with a token promotion for Jeannie.

At the end of season one, the firm that The Pod worked for is full of corruption and sexual harassment, and it is all falling down around them. With “Stochasticity,” it’s a re-do, as Julianne treats them well, and trusting Marty (Don Cheadle) to help bring the company back up to the top. This is a little bit of a relief, after the near-apocalypse that could have disrupted the show forever.

How much has really changed, though? Maybe the boss is a little nicer to work for, but The Pod is still operating as a unit, and they are continuing to do their thing. Professionally, it’s all status quo.

Personally, is a different story. Marty and Jeannie are quite drunk when last they are together, and now they cannot remember if they hooked up or not. From the brief memories that do flutter back, it seems relatively certain that they did. If not, they at least come close enough that it’s practically the same thing, on an emotional level. Joint puking during naked pushups have to have some effect on their chemistry!

Would Marty and Jeannie make a good couple? I’m not so sure, long-term. They are both a bit of a mess, and could be a fine comfort to each other for now. They are probably both good in bed, which the other would appreciate. And no one can deny thatBellis smokin’ hot; I’ll leave it to the ladies out there to say the same for Cheadle. Visually, viewers should be happy with the arrangement.

I can’t help but think, Marty and Jeannie as a couple could destroy The Pod. All four members must always be at the top of their game (yes, even Doug (Josh Lawson)). Anything can happen at any time, such as in “Stochasticity,” when they meet with a client who they don’t have any information on at all, including what his company does. It’s a high energy, very skilled game that they play in the conference room. They are all brilliant at it, especially together, but if Jeannie or Marty were to become distracted at an inconvenient time, it could spell disaster for the company, and this group.

Not that I’m rooting for Marty to become a bed hopper again. He’s been enough of that, and I am so, so glad he draws the line at sharing loose women withClyde(Ben Schwartz), even in a dark time. It’s a very funny scene, to be sure, but not one that needs to go any further than it does.

Marty also has his son, Roscoe (Donis Leonard Jr.), to think about. After Roscoe moves in with Monica (Dawn Olivieri), one might hope that Marty will re-examine his lifestyle. Yet, there aren’t many signs of that in this first episode back, other than when Marty tries to get with Monica, which can be seen a couple of different ways.

A reunion of Roscoe’s parents would only be destructive, despite what Marty may think in the moment. Does Marty make a move on Monica because he’s lonely, or because he thinks that it’s best for Roscoe, or because he just wants to be near his son again, who lives in Monica’s house? None of these are good reasons, and since love is out of the question, sleeping with Monica at this point would be a huge mistake.

HOUSE OF LIES is a comedy, but it is also a drama. Season one disguised that more fully, with the cut scenes where Marty speaks to the camera making everything a little sillier than it needs to be. As season two picks up, some of those trappings have been stripped away. Potentially, this could make for a more serious and more interesting sophomore year. If nothing else, the premiere is off to a good start.