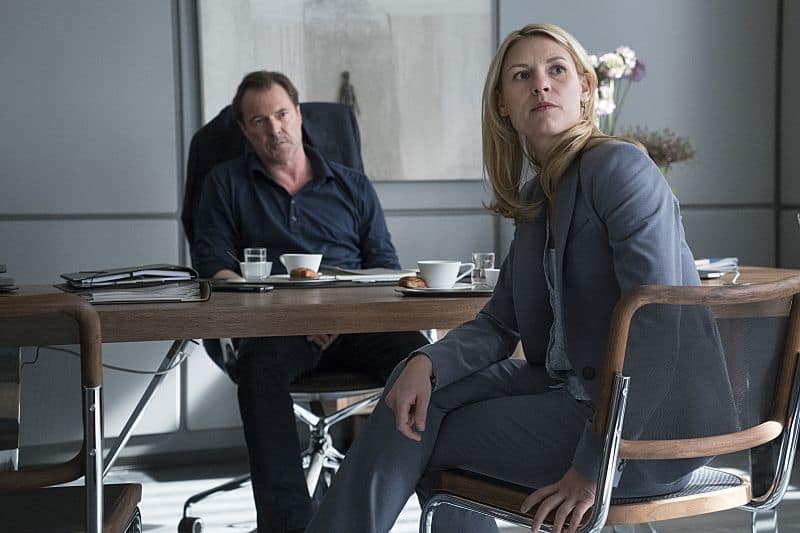 Showtime’s HOMELAND returns tonight for a fifth season with the installment “Separation Anxiety.” After an amazing freshman run that kept the audience guessing about the motivations of one of the show’s two leads, seasons two and three faltered as it kept the same pair of main characters without a story nearly so compelling to back it up. So if you’re one of those fans who jumped ship, you may be asking yourself, should I even care that the show is still on? The answer is yes.

Season four reset the game, reinventing HOMELAND as a one-woman show, with a couple of very good male supporting characters. The trio got into some very heavy things in the fourth year, and the formula diverged from the typical television one in that (SEASON FOUR SPOILER) they didn’t win the day. Not even close.

So as “Separation Anxiety” begins, two years later, these people are in a different place than we’ve ever seen them. Unlike the early days of the show in which our characters kept going after one man, season five finds them moving on, albeit in different ways. This makes the drama much more grounded and realistic, knowing that the world keeps turning, they don’t always get their man, there will be other terrors, and maybe some people don’t want to keep playing a game they’re sick of losing. The psychology behind what each of the trio have chosen to do during the hiatus is fascinating.

As has been publicized, Carrie (Claire Danes) is happier than she’s ever been. Living with an American lawyer, Jonas Happich (Alexander Fehling, Inglourious Basterds), in Germany, raising her daughter, on her meds, Carrie has found peace. She has left the CIA behind and now works security for a private organization, conveniently the same one Jonas is employed by, whose billionaire head, Otto During (Sebastian Koch, The Lives of Others), does good in the world. It is great.

Of course, HOMELAND would not allow such bliss to remain for long. “Separation Anxiety” opens with a CIA crisis in Germany, one in which Saul (Mandy Patinkin) has to come to town for. This year’s emergency is timely and poignant. It deals with hacking and data breaches and rights of the press and homegrown terrorism recruiting and off-the-book-assassinations and government conspiracies. Yes, all of the elements are present in a single event that occurs in a single episode.

I think this shows the way forward for HOMELAND. While some may want it to end, it doesn’t have to if it’s going to be an intelligent look at current events with something to say. Its characters are complex and the writers show the different sides. The world portrayed is both very big and very small. Season five is its own thing, but it doesn’t forget what came before it. I can see a number of more years using this same approach in different ways and being very successful, as season five already seems poised to be.

Now, Carrie isn’t drawn back in immediately, nor should she be, given where she is. I hate when shows artificially stretch things out, and then quickly revert to the status quo, but I don’t think that’s what’s happening here. From the tension between Saul and Carrie, who are not talking, to the new Berlin station chief played by Allison Carr (Miranda Otto, Rake, The Lord of the Rings), to a righteous, naïve rebel (Sarah Sokolovic, Cold Comes the Night), there are enough new pieces to the show that don’t point to a reversion. There are also returning characters like Dar Adal (F. Murray Abraham) and Astrid (Nina Hoss) whose roles aren’t yet defined. Carrie will get involved, but she isn’t just going to jump back in under Saul on an operation, nor did she do that last year.

And what of Peter Quinn (Rupert Friend), who along with Carrie and Saul is one of the three current leads of HOMELAND? Well, let’s just say where he’s been is very interesting, revealing something really deep and dark about his character, and where he ends up at the end of the episode in an arrangement with Saul is both surprising and suspenseful.

I’m telling you, despite some bumps in the road in seasons two and three, HOMELAND is a show you don’t want to miss once more. Watch it Sundays at 9 p.m. ET on Showtime.