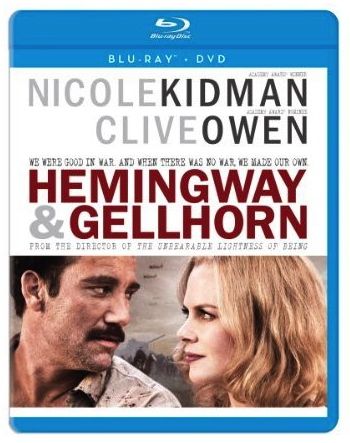 Seat42f and HBO have teamed up to give FOUR lucky winners a copy of HEMINGWAY & GELLHORN on BLURAY. For a chance to win leave a comment below telling us why you want to add HEMINGWAY & GELLHORN to your BLURAY collection. Only one entry per person. Contest ends April 9th. Winners will be notified on April 10th via email so make sure to use a valid email address when you post your comment.

Academy Award® and three-time Golden Globe® winner Nicole Kidman and Academy Award® nominee and Golden Globe® winner Clive Owen star in HBO Films’ Hemingway & Gellhorn, under the direction of Academy Award® nominee Philip Kaufman (The Unbearable Lightness of Being). Nominated for two Golden Globes and 15 Emmy® Awards, winning two, the film was hailed as “poignant…Kidman and Owen bring real pathos and power to their portrayals” (Newsweek) and “intoxicating…the star power is formidable” (TV Guide).  Hemingway & Gellhorn debuts on Blu-ray/DVD Combo Pack, DVD and Digital Download on April 2, 2013 and includes bonus materials that delve into the production of the critically-acclaimed film.

Hemingway & Gellhorn recounts one of the greatest romances of the last century – the passionate love affair and tumultuous marriage of literary master Ernest Hemingway and trailblazing war correspondent Martha Gellhorn – as it follows the adventurous writers through the Spanish Civil War and beyond. The combined magnetism of Hemingway and Gellhorn ushered them into social circles that included the elite of Hollywood, the aristocracy of the literary world and the First Family of the United States. As witnesses to history, they covered all the great conflicts of their time, but the war they couldn’t survive was the war between themselves.