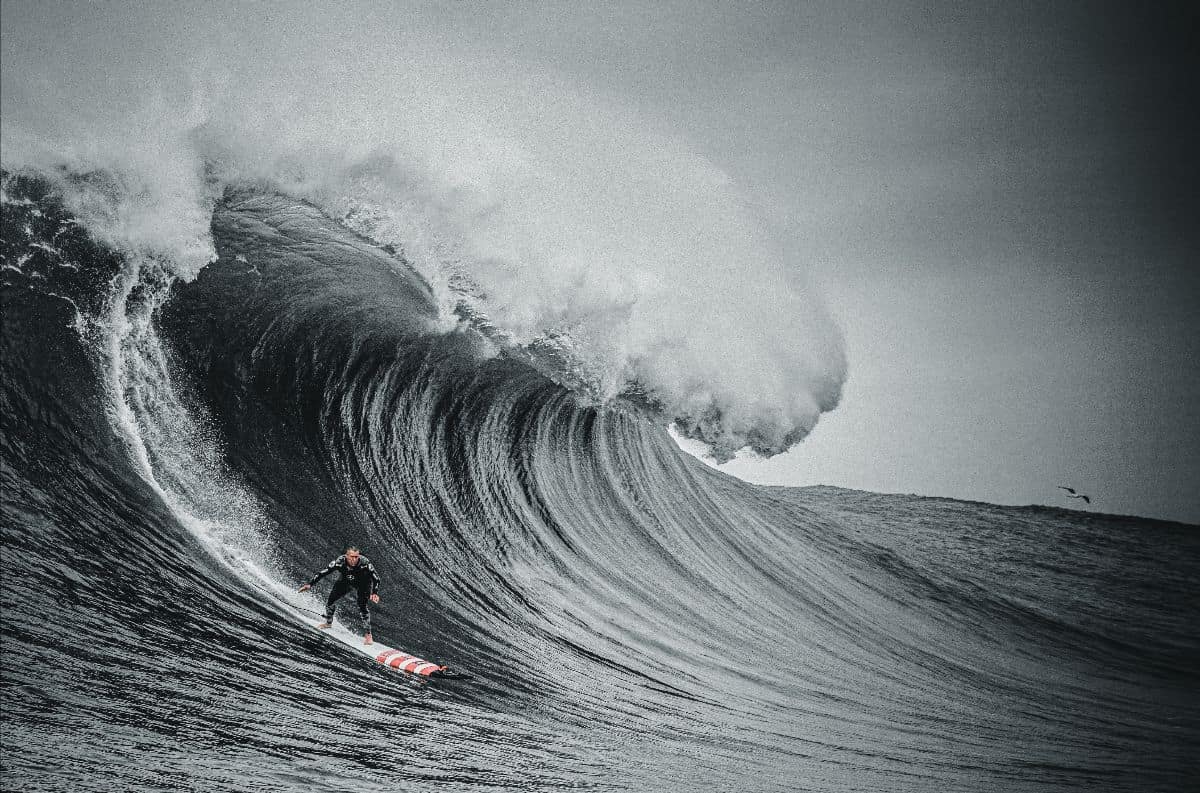 The series will premiere this spring on HBO and be available to stream on HBO Max.  ­

After being recruited by a band of Nazaré locals who hoped to see if the dangerous swells they had observed their entire lives were surfable, McNamara – the Guinness World Record holder for the largest wave ever surfed for eight years – and his wife, Nicole, traveled to the remote city in 2010 to pursue the monster waves. Standing atop the city’s abandoned 500-year-old lighthouse, they witnessed surf more dangerous than any they had ever seen, and a possible answer to Garrett’s lifelong quest to ride a 100-foot wave. In the years to come, their journey helped attract the most fearless big-wave surfers to Nazaré and helped solidify it as the marquee destination in the sport.

Over the course of six episodes, 100 FOOT WAVE interweaves the transformative story of the seaside village with McNamara and his peers’ ongoing search for the tallest wave on the planet. The series captures the common spirit and fearless passion shared by McNamara and big-wave surfers from across the world as they push themselves through life-altering injuries and tantalizing near-misses in their collective pursuit of the inconceivable. Spanning four continents, 100 FOOT WAVE is an inspirational story of a group of people on a quest to achieve new heights, and a town and a sport that were forever changed by one seemingly impossible dream.

About Library Films
Library Films, helmed by director Chris Smith, produces and finances premiere documentary projects. Wry, empathetic, and wise, Smith’s films occupy a special niche in contemporary cinema. His Sundance Grand Jury Prize winning American Movie follows an irrepressible young director cobbling together a regional horror film. His narrative feature The Pool won a Special Jury Prize at Sundance. The film’s New York premiere was accompanied by a MoMA retrospective of Smith’s other work titled Chris Smith: American Original. More recently, Chris has directed and produced a run of blockbuster documentary feature films and series. He directed Jim & Andy: The Great Beyond, a documentary detailing Jim Carrey’s transformation into Andy Kaufman for his role in Man on the Moon. The film premiered at the Venice Film Festival and went on to win the LA Film Critics Society for Best Documentary and a nomination for Outstanding Documentary at the Emmys. Chris also directed FYRE: The Greatest Party that Never Happened. The film entered the pop culture zeitgeist upon its release and earned four Emmy nominations. He also directed the docu-series The Disappearance of Madeleine McCann. His latest docu-series Tiger King: Murder, Mayhem and Madness, which he served as an Executive Producer, took the world by storm and went on to garner six Emmy nominations.