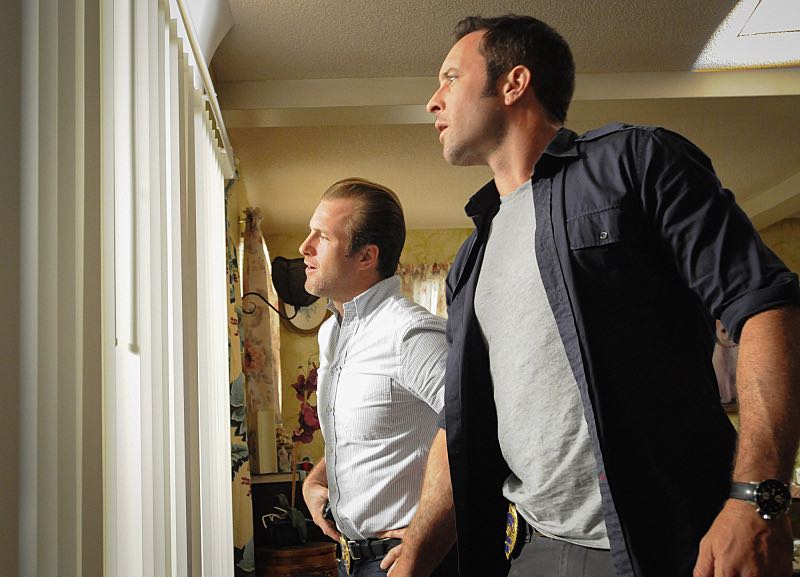 This episode of Hawaii Five-0 had a few fun shout-outs to one of my favorite movies of all time: Stakeout. Much like the 1987 flick that starred Richard Dreyfuss and Emilio Estevez, Steve and Danny had to work out some personal issues while they were staking out the apartment of a woman involved in a crime.

Unlike the film, the woman targeted for this stakeout wasn’t just an innocent bystander. She made a big mistake when she decided to double-cross her boyfriend after getting him to rob a jewelry store. Maybe some other schmuck would have keeled over and died after being shot point-blank, but Emma learned the hard way that former Serbian Special Forces guys don’t go down without a fight.

Knowing that Ivanovich would come looking for the woman who betrayed him, the boys set up shop in an apartment across the way from Emma’s. The timing was perfect as they’d just been to see their therapist again and being stuck together in an apartment for a couple days was a good way for them to get all their issues out on the table. They also picked up a few new ones as well. For instance, I didn’t know that Danny was a dog guy and Steve a cat guy, but it totally fit with their personalities.

While keeping their attention on the happenings in Emma’s apartment (including when Emma’s girlfriend and co-conspirator showed up for some sexy times), Steve and Danny had the chance to talk some things out. Danny’s always been one to share his feelings pretty openly, but as Steve said, the McGarrett men just don’t do that. I knew Steve probably wasn’t going to end up bawling on Danny’s shoulder, but I saw it as a huge step when he did talk about the incident with the guitar.

In the end, the bad guy was caught and Steve and Danny got closer than ever. They even managed to put some drug dealers out of business and got a nice lady some much-needed company, thanks to a little help from Jerry.

Danny: “Why speak English when you can just blow air out of your nose?”

Completely losing it when Danny spotted the painting of Mr. Pickles, and laughing even harder when he almost shot the damn cat.

Thinking it appropriate that Steve liked cats because they never forgot how to kill.

The guys debating whether or not they should watch Emma undressing in her apartment.

Steve: “It must be exhausting, projecting that much contempt onto a piece of porcelain.”

Okay, ‘fess up. Who else kinda hoped that Steve and Danny would light up when Steve found all that pot in the kitchen? It would certainly have been one way for them to chill out.

The fact that Steve had an entire conversation with Ruth while a cat sat on his shoulder. So cute.

Ruth, of course, assuming that Steve and Danny were a couple.

Danny pointing out that he personally would have gone with the gay thing in order to keep their cover.

The conversation going quickly from food to Steve always needing to be in control, such as driving Danny’s car.

Ricky not realizing that he was offering two cops all kinds of drugs.

Ruth opening her door to Jerry and immediately telling him the guy who sells pot is in another apartment.

Ugh, I’m so with Danny. Why in the world would Steve microwave and omelet when cooking one on the stove takes almost the same amount of time?

The way Burns came in the door.

Grover: “The two of you haven’t even been here more than a day. How the Hell does it smell this bad already?”

The boys discussing how the ladies’ stamina gave men a bad name. Ha!

Danny realizing that Steve had looked at the book, but would rather take cyanide than discuss his feelings.

Steve opening up about why he stopped playing guitar. Aw.

Danny: “I just figured after everything we’ve been though, your father, my brother, everything, I figured maybe I was someone you could open up to.”

Cracking up at how quickly the guys went from opening up to each other to screaming at each other.

Ivanovich showing up at the jewelry story looking like freaking Robocop, and the fact that Kono still took him down without breaking a sweat.

The guys giving Ricky a pass for finding Mr. Pickles.

Jerry taking Ruth out for a walk to see the sunset. Aw.

Ruth: “Take it easy on the garlic, I’m thinking of making a move on that silver fox over there.”

Danny presenting Steve with a guitar. So sweet.

Steve letting Danny drive his own car. Yeah, I’d call that a breakthrough all right.

“The Boys Are Back In Town” playing as the boys drove away. Too perfect.

What did you think of this episode of Hawaii Five-0? Which was your favorite bromance moment between Steve and Danny?