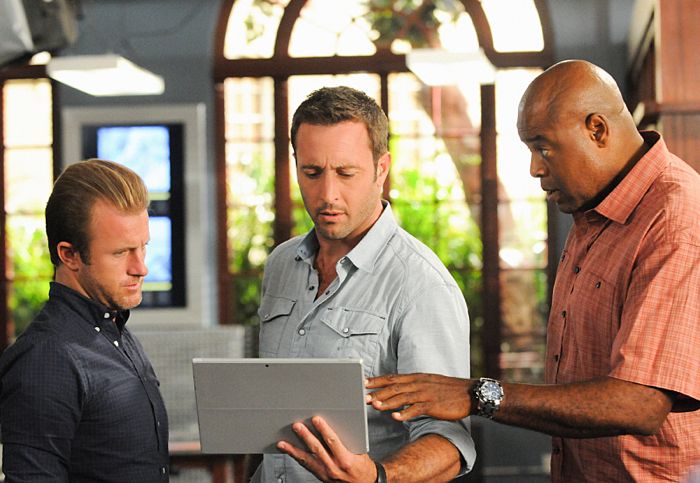 It’s Christmastime on the island, but unfortunately that doesn’t mean the bad guys were taking a break in this episode.

First off, I have to commend the show for the case that involved cowboys and horses. As a former horse trainer and riding instructor, I’ve learned to bite my tongue and try not to cringe too much as TV shows depict the horse world completely wrong. My biggest pet peeve is always the horses neighing when they are galloped into a stressful situation. The truth is horses are very quiet, especially when they are frightened. But I’ve learned to ignore that and I was impressed that this episode actually did a pretty bang-up job with the horse story. I loved that Danny figured out the bad guy was going to kill the horse and they were able to get there in time to save Urban Myth and then reunite him with his trainer.

Beyond the murder, there was everything that had to do with the holiday. I wasn’t at all surprised that Danny put off looking for a tree until the last minute and ended up with a very small selection at the Christmas tree lot. That’s something he would do, as is Steve breaking the law to give Danny and Grace a beautiful tree. We’ve had some unusual carguments on this show, but I think the one with the Christmas tree strapped to the roof of Danny’s car will always have a special place in my heart.

Another fun part of this episode was of course the rivalry between Max and Sanjeet. I knew from the moment they started arguing about “Janice” that she had to be an action figure. I laughed when I found out I was right, but I still thought it was great that the guys were able to get past their differences and work together. In fact, it was so much fun watching them that I kind of hope we get to see Sanjeet back again someday.

In the end, Pua found out about Steve and Danny’s tree thievery, but luckily he was willing to hold off from confiscating the tree on Christmas Eve. I hope Danny was able to talk him into leaving the tree for at least a day because losing it on Christmas isn’t all that nice either. But at least we got to see the whole gang gathered around the tree to sing Christmas carols before it disappeared.

Wait. How did the cowboy end up on Mars?

The truly pathetic choice Danny had for Christmas trees. It was like Charlie Brown’s Christmas threw up on that light.

Cracking up when Danny basically stole my Charlie Brown line.

Steve being willing to break the law to give Danny and Grace a tree.

Totally loving the fact that “Holiday Rode” was playing as the guys drove the tree home.

Danny accusing Steve of being a Scrooge. Not particularly nice to call someone that who just got you a tree.

Grover: “Max, you want to introduce us to your friend?”

Max and Sanjeet: “We’re not friends.”

Cracking up again when Grover stole my line about the dead cowboy on Mars.

Sanjeet: “What are you doing?’

Max: “My job. You should try it sometime.”

The smug look on Max’s face when he revealed his conclusion that their victim was a bull rider.

Pua asking questions about the whereabouts of Steve and Danny. Uh oh. Methinks the boys got caught stealing that tree.

Kono tackling Luke and roping him like a steer. That was awesome.

Realizing immediately that Janice was not a woman. Let me guess, she’s a collectible of some sort?

Danny talking about the special look he got from Grace on Christmas morning when she believed in Santa. Aw.

Sanjeet not being able to believe it when Max gave him a compliment.

Pua putting Steve and Danny into a mug book.

The reunion between man and horse. That was so incredibly sweet.

Max holding himself back when Sanjeet complimented Max’s skills as wingman.

HA!!! I knew it was an action figure. Did I call that or what?

Danny: “So this beef between you two this whole time has been about a Barbie doll?”

Pua deciding to let Danny keep the tree until the next day.

Everyone singing Silent Night together.

What did you think of this episode of Hawaii Five-0? Which was your favorite storyline from the episode?