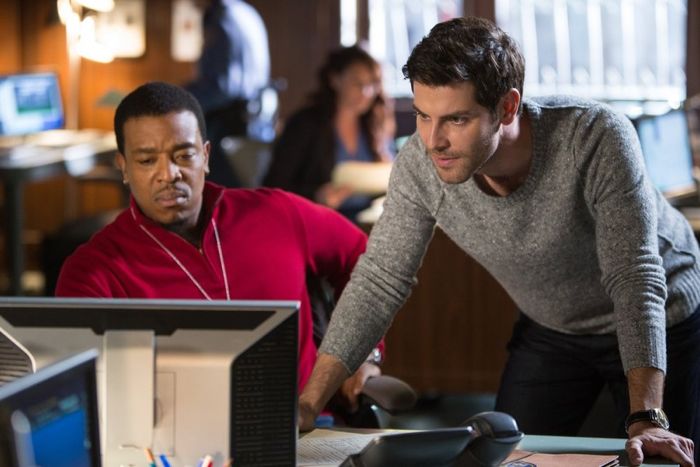 This week is the mid-season finale of NBC’s GRIMM, and although the series is taking less than a month off before it returns, it still goes out on quite the cliffhanger. Nick (David Giuntoli) and Hank (Russell Hornsby) investigate a “Chupacabra,” which is a disease that affects Wesen, rather than a Wesen itself. During the course of the case, Wu (Reggie Lee) gets fed up with being kept in the dark and quits right as the guys admit to him that everything he’s seen is real. Meanwhile, Monroe (Silas Weir Mitchell) is kidnapped by the hate group that has been terrorizing him and Rosalee (Bree Turner).

It’s about time Wu’s concerns are addressed! This arc has been going since last season, and Wu has been ignored far longer than it is realistic to do so. If I were Wu and became obsessed with these creatures that I’m seeing, I wouldn’t be content to be dismissed for weeks. However, at least GRIMM does deal with it, having Wu willing to quit the job he loves because he can no longer function when the facts pile up in his favor and Captain Renard (Sasha Roiz) still won’t listen to him.

I’m impressed at that research Wu does. When he goes to Captain Renard, he has lots of examples of creature attacks and dead suspects, which really points to malfeasance by Nick and Hank. Wu should be angrier than he is and going over Renard’s head, though thankfully he doesn’t. Hopefully, Renard will see that he’s underestimated Wu, who apparently could be a big help to the cause, given the skills he is demonstrating.

Hank is suddenly very keen on filling in Wu, rather than losing him from the force. I’m not sure I quite buy this turn. If Hank really cared about Wu, he would notice how bad Wu is getting earlier and helpe the man out. Instead, Hank has been treating him poorly, which makes his immediate concern a bit false. But I can overlook this if it ends with Wu being a full member of the Grimm team.

I like the “Chupacabra” case itself, which thankfully makes up a more minor segment of the episode than recent crimes have. GRIMM has started spreading out from Wesen lately to show some other creatures, and having an AIDs-like disease such as this is a cool development that further expands the world. Were it to become a serious epidemic in the Wesen community, then the show could do some real social commentary, but I don’t think it’ll come to that, especially considering how easily it is cured.

On a side note, it feels pretty forced that “patient zero” heroically sacrifices himself for his wife. It’s like the show goes too far to prove just how good he is while the ill version of him is slaughtering innocents. And having only enough ingredients on hand to cure one victim is predictable and silly. But I get why the writers do this, even if I don’t entirely agree with it.

GRIMM is doing some social commentary already in Monroe and Rosalee’s story. From burning wood in the front yard to bricks through the window, there is no mistaking that racial overtones to these specist attacks. The story goes a little more GRIMM-y this week when a dead fox is left hanging at the spice shop, but it’s still essentially the same subject material. Given what is happening in the news lately, and the inclusion of at least one law enforcement office on the wrong side, this feels timely, even if some of the methods used against them are dated.

As I’ve pointed out, “Chupacabra” is not without flaws. But I did like the episode a lot, which focuses more on the things that matter, rather than an isolated crime. This includes making time to reveal Juliette’s (Bitsie Tulloch) latest issue, to see Adalind (Claire Coffee) and Viktor (Alexis Denisof) team up, and to bring Renard into the latest resistance developments. All of these plots, combined with the larger Wu and specist stuff, are what I watch GRIMM for. The winter finale does this well.

GRIMM will return to NBC in January, airing Fridays at 9 p.m. ET.