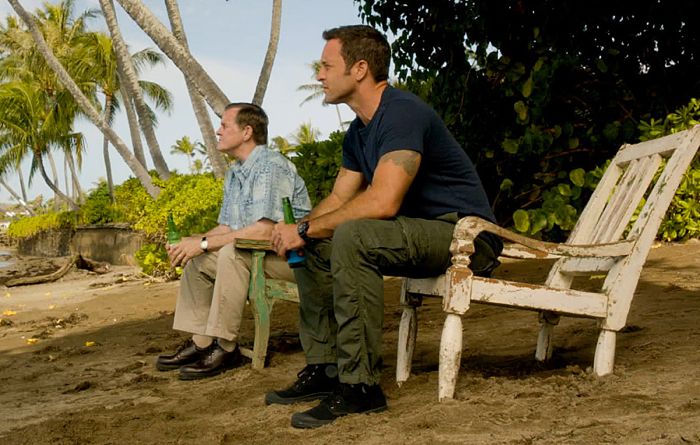 In the 100th episode of Hawaii Five-0, “Ina Paha” (Hawaiian for “If Perhaps”), Steve was forced into a fantasy world where everything about the last four years has changed. But the fantasy was based on a very harsh reality.

I knew this episode would delve into an alternate universe where Steve’s entire life, and the lives of those around him, would be different. I didn’t realize just how different everyone would be.

Danny was the biggest transformation. I just about fell off my couch when he walked up to Steve in that Hawaiian shirt, spouting Hawaiian with a big smile on his face. It was easy to think that this other Danny was a happier guy and maybe he would’ve been better off. But then I saw him in that hospital room and I was wishing for the old Danny back. One of the reasons I love Danny is for his heart, but that guy – the one with the big smile plastered on his face – was cold and heartless and I didn’t like it.

Steve was a different guy in the fantasy world, but his other personality also had its good and bad points. Of course he was happier because his father was still alive, but he somehow didn’t seem as relaxed either. As the other Danny pointed out, that Steve needed to lose the uniform and chill out. It’s almost sad to say it, but that Steve didn’t have the edge that I’m used to seeing either. I say it’s sad because I’m sure that came from losing his father.

As for the rest of the group, they were all variations on the good/bad transformation. Sweet, kindly Kamekona was a big, mean guy in prison. But Chin was a respected captain on his way to being Chief of Police. Both Grover and Kono seemed happy in their alternate worlds, but they also seemed a little lost and without purpose as well. Max looked like he was doing okay as a doctor in the hospital, but my heart broke when we saw Jerry as a homeless man living with his own demons.

The other fun part of seeing all the different versions of people was watching this talented group of actors put a different spin on their characters.

Back in the real world, it was Wo Fat who was putting Steve through the seemingly endless torture. He was convinced that Steve knew where his father was and it was pretty obvious that he wasn’t going to stop until he had the answer he wanted.

And through their conversations, we finally got to the truth about Wo Fat and Doris. After Steve had the DNA test done, I knew she wasn’t Wo Fat’s mother, but that wasn’t exactly correct. I could see Doris taking in the baby of a woman she had accidentally killed. It’s too bad that Wo Fat was taken away from her. It’s another one of the moments where you wonder what would have happened had he been allowed to stay with her. Steve and Wo Fat might have come to know each other as real brothers.

Instead, they were mortal enemies, right until the bitter end. It was shocking to see Steve put a bullet through Wo Fat’s skull and yet it was something that needed to be done.

Which brings me back to the ending of the episode and that absolutely beautiful montage. Steve momentarily forgot which world he was in and almost expected to find his father alive. The truth shattered him, but I like to think those scenes were depicting him remembering all of the good times he’d had with his friends and why it was okay to be out of the fantasy world and back in the real one.

How did I forget that Daryl Dixon (aka Norman Reedus) was in the premiere?

Finding out that Danny was on the other end of that phone. Goose bumps.

Gavin Rossdale as Johnny. That is all.

How quickly Danny figured out that somebody took Steve.

The ringtone on Danny’s phone.

Kono in a lip balm commercial.

Poor Steve huddled in that corner. It hurt my heart to see him that broken and vulnerable. .

Kamekona: “This better be good. You’re interrupting my lunch.” Danny: “I’m sure all the other inmates will be happy about that.”

Kamekona calling Steve a “strippergram.” – OH HOW I WISH.

Steve finding a way to fight back, even while drugged and strapped to a chair. Yeah!

The terror in Danny’s voice when he walked in that room and called Steve’s name.

Steve waking up and asking for his dad and breaking down when he found out the fantasy was over.

What did you think of the Hawaii Five-0 100th episode?