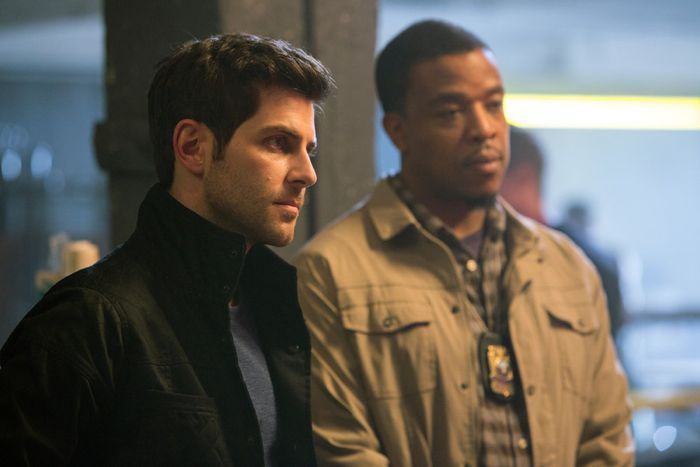 NBC’s GRIMM goes back towards being a standard procedural this week in “The Last Fight.” A murder leads Nick (David Giuntoli) and Hank (Russell Hornsby) to investigate a boxing establishment that they think is run by Wesen. Of course, since Nick no longer has his Grimm powers, they can’t know for sure without bringing Trubel (Jacqueline Toboni) along to help. That isn’t the best idea, since she’s not a cop. But the ‘mystery’ of the hour is pretty normal fare and is easily solved by the end.

I don’t like procedurals. The format is tired and stale at this point, presenting the same boring story week after week. Some shows, like GRIMM, have taken the genre and turned it on its head a little bit, but refuse to leave it behind completely. What’s disappointing about GRIMM is that it hews so closely to Buffy the Vampire Slayer, a brilliant series that ditched the monster-of-the-week formula in season one. GRIMM sometimes follows this example, but not always, and by comparison, it is definitely inferior.

The reason “The Last Fight” is not as annoying as most instances of this repetition is because the case serves to highlight a number of things. Most importantly, the status quo is not working. Nick has to rely too much on Trubel when dealing with the Wesen, and she’s not reliable, neither experienced nor reasoned enough to follow instructions. He is endangering her and that’s frustrating for him and the viewer, and probably to Trubel, too, to a lesser extent.

Monroe (Silas Weir Mitchell) and Rosalee (Bree Turner) are working on a cure for Nick. This week, they team up with Renard’s mother, Elizabeth (Louise Lombard, CSI), to retrace Adalind’s (Claire Coffee) footsteps and recreate the potion. It’s an uneasy alliance, but I think we can trust Elizabeth. After all, Renard (Sasha Roiz) trusts her, and he has proven himself to us time and again. He doesn’t trust her enough to tell her exactly where the baby is, but the fewer people that know that, the better.

Speaking of trust, it’s time to trust Wu (Reggie Lee) with the secrets that the rest of the main cast already know about. Nick begs off of explaining things this week, claiming that, since he’s not a Grimm any more, he doesn’t have anything to tell Wu. This is bull crap. Nick could still show Wu the trailer and Monroe and fill him in on what’s been happening. There will obviously be a big adjustment period for Wu once he does find out, but the sooner Nick starts talking to him, the sooner Wu can be useful. Right now, with his powers gone, Nick needs all the help he can get.

The other thing Nick is dealing with is his body switch with Adalind. We don’t know what causes it and it seems to be very temporary, but apparently there is some connection between the two that isn’t yet broken. I honestly have no idea what it means.

Adalind is still over in Europe, but at least she’s not locked up anymore. She makes a friend in the dungeon who escorts her out through a secret passage way. If I were Adalind, I’d be suspicious of this deus ex machina. For one thing, the man seems completely insane. For another, would Viktor (Alexis Denisof) really lock her up somewhere that was so easy to escape? I smell a trap here. The question is, what is Viktor hoping Adalind leads him to? The baby? Because he knows Adalind has no idea where the infant is.

For what “The Last Fight” is, a standard procedural installment, it does manage to be pretty darn good. By keeping lots of the mythology and on-going arcs in the episode, it helps ease the annoyance of the very predictable case included, too. I hope most GRIMM episodes are better than this, but this one isn’t bad.