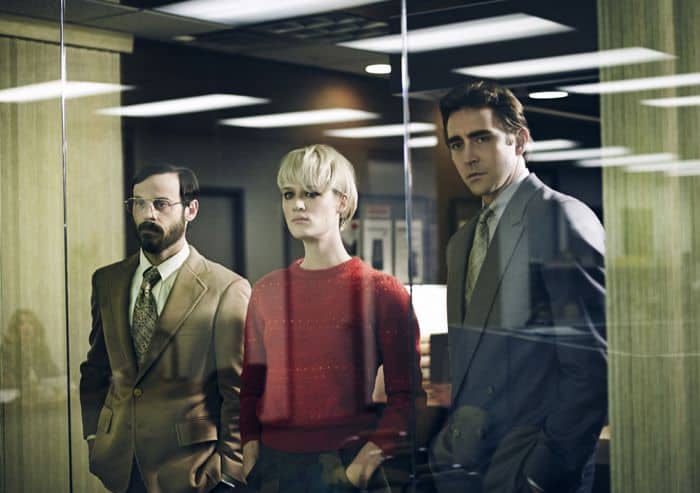 WARNING: Since the pilot has already been released to the public online, this review does contain spoilers. If you’d rather not be spoiled, I recommend going to amc.com and watching the first hour, then returning to read this article.

AMC, known for well-developed dramas covering many eras and characters, is telling the story of the personal computer revolution of the 1980s with their latest series, HALT AND CATCH FIRE. It follows a handful of fictional people who push an unwitting company into funding and marketing their product, competing with behemoth IBM in developing an operating system that makes use of the machines’ potentials. And it’s pretty good.

The pilot, available streaming on AMC’s website now, ahead of the premiere date, is called “I/O.” Like the title of the series itself, this refers to a computer operation. Halt and Catch Fire is a command that has the various programs within the computer struggling for control, while I/O, or Input/Output, is about the computer interacting with the outside world or the people using it. Plus, I/O is central to BIOS, a component of the machine dealt with quite heavily in “I/O.” These both are pretty accurate descriptors to the general plot.

At the center of the show are Joe MacMillan (Lee Pace, Pushing Daisies, The Hobbit) and Gordon Clark (Scoot McNairy, Argo). Joe is a fast-talker with big dreams, while Gordon is a brilliant mind who has been burned by chasing his own work before. Joe’s task of convincing Gordon to partner with him isn’t an easy one since Gordon has a family to support, but the show would be over awfully quick if Joe fails, so of course Gordon eventually agrees.

Gordon’s wife, Donna (Kerry Bishe, Argo, Scrubs: Med School), figures prominently as one of the five main characters, and while she is initially an obstacle, does not seem primed to be an ongoing antagonist. She is supportive but realistic and determined to protect her family, which includes two daughters (one of whom is played by the adorable Maggie Elizabeth Jones, who seems to pop up everywhere these days). Bishe is well cast in this.

The other female main cast member is Cameron Howe (Mackenzie Davis, That Awkward Moment), a programmer that Joe recruits to help with building the BIOS. She is connected to Joe in more than a casual way, but I don’t feel like she’s a love interest for him, which is refreshing, rather than having two couples at the center of the show. Not everyone needs to be constantly hooking up, and thankfully Joe doesn’t feel like someone concerned with that. We don’t know a lot about the rebellious Cameron yet, but I assume that will change in the weeks to come.

Rounding out the cast is John Bosworth (Toby Huss, King of the Hill), the man Joe tricks into hiring him, and then is stuck being Joe’s boss. Bosworth is, initially, the bad guy, if such a term can apply to anyone in the ensemble. I get his anger; anyone in his position would be furious with Joe. What I’m most interested in, though, is seeing where HALT AND CATCH FIRE takes him from here. Will he eventually be a champion for the computer, someone who gets involved and helps out, or even takes credit for their work, or will he always be trying to tear them down? The former would be far more interesting and fresh.

Much of “I/O” is concerned with the setup, introducing Joe, Gordon, and the other characters, and then building the foundation of what their arcs will be. We see a bit of their personalities, learn a smattering of backstory, and the project begins to move forward. While this is fairly standard for a pilot, HALT AND CATCH FIRE does this without obviously beating us over the head with the checklist, dropping us into a story and letting those details flesh themselves out as the story rockets ahead. It’s a good way to begin.

[quote]It seems like the pacing of HALT AND CATCH FIRE will be much faster than, say, Mad Men. While still taking time to get into the psyches of its leads, especially in examining self-doubt, there is also a lot of momentum to the primary thread. This bodes well, and considering the excitement the production is trying to build, it seems like a smart move.[/quote]

Like most AMC period pieces, HALT AND CATCH FIRE looks good. It isn’t that far in the past, but still, the cars, costumes, and sets match the style and taste of a few decades ago in what appears to be an authentic manner. I didn’t see any obvious mistakes or shoddy workmanship, so the series should satisfy those who are interested in such things.

HALT AND CATCH FIRE is not immediately on the level of Breaking Bad, Mad Men, or The Walking Dead, the most popular series for the network so far. But it’s at least as good as Turn or Hell On Wheels, so well worth checking out when it airs Sundays starting June 1st.