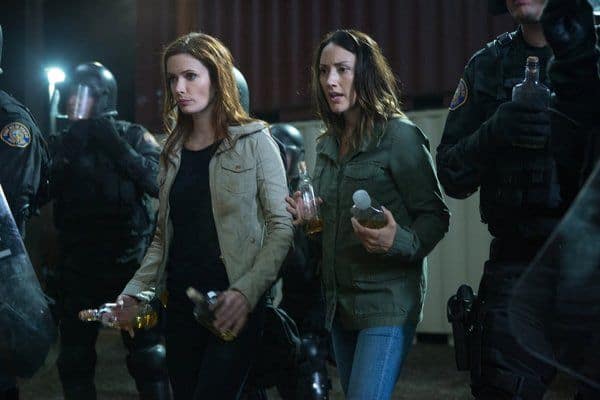 NBC’s GRIMM left us on a heck of a cliffhanger last spring, with Nick (David Giuntoli) captured and zombie-fied, and his friends surrounded by The Baron’s (Reg E. Cathey) minions. This week’s season three premiere, “The Ungrateful Dead,” picks up right where that hour left off. In fact, it picks up prior to where last year stopped, replaying the last several minutes, and then continuing on from there.

Sometimes, if a situation is particularly perilous, shows don’t mind reusing some footage again in the next episode, usually just a smidge to remind us of where things stand. “The Ungrateful Dead,” unfortunately, uses more than that. There may be a fine line in doing this, and GRIMM crosses it, making one glance at the clock a few times, wondering when we’ll get to the fresh stuff.

When we finally do, however, the episode picks up and takes off running. There’s a lot of action and a lot of development, all taking place on that same night. I complained in my season two finale review that the danger in GRIMM is usually too light, but that is not the case here, with Nick, especially, running the risk of lasting damage. Depending on how things shake out next week, there could be ramifications that matter for weeks or months.

There are a few hokey elements. The big, splashy, visually exciting sequence jut after Nick wakes up doesn’t hew too close to realism. However, overall, it definitely feels like the series is growing up, and taking all of the individual elements of the show with it.

Another thing I mentioned in my most recent review was that I wished the ensemble was beefed up and given more to do. That happens immediately in this installment. You’ll remember Nick is in a coma and destined to be a zombie of some sort when he awakes. This leaves everyone else to band together and try to save the day. They aren’t as effective as Nick himself would be, perhaps, but thankfully they are given the chance to try, which will only make fans’ affection for them grow.

This works best when they are doing something. At one point in the episode, Monroe (Silas Weir Mitchell), Juliette (Bitsie Tulloch), and Rosalee (Bree Turner) take a second to regroup and discuss course of action. This is the worst part of “The Ungrateful Dead.” The conversation needs to be had, of course, but with the immediacy of events, it should take place on the run or in a speeding car, not the way it does. But that’s the only one scene that felt truly off and frustrating.

Captain Renard (Sasha Roiz) has a great, but brief, scene in which he lets a little of his beast out. This is something GRIMM has touched on in the past, but not really spent much time with. I feel like with the direction the plot is heading in, there will be more opportunity for Renard’s “wild side” to come to the front, and I look forward to it.

Wu (Reggie Lee) shines in “The Ungrateful Dead,” even in only a small part. It’s hard to figure out how to use his character sometimes, with him not being in the loop about the supernatural stuff. Here, we see him doing police work, in charge and tough. This is a glimpse of how he must be on the job all of the time that he’s off screen, and I like it. There are definitely ways to work with this and take him a step further.

Adalind (Claire Coffee) remains apart, too, but that’s a necessity based on her arc. She is still dealing with things from last year. I won’t spoil what exactly happens with her in this premiere, but I can confirm that I think her exile is about to end, and I wouldn’t be surprised if she returns to the main fold within a week or two, hopefully in a big way.

Besides the characters, which GRIMM does well, the dialogue is outstanding. Buffy the Vampire Slayer, the most obvious, great series to compare this one to, was funny as well as scary and emotional. GRIMM has always played with the humorous elements a little, too. In “The Ungrateful Dead,” there are more than half a dozen absolutely terrific one-liners and gags. For such a dark, serious episode, that’s a welcome addition, and I think the writers are really starting to enjoy using the silly parts of the characters.

Lastly, I have also complained about GRIMM being too procedural, but said that last spring’s final two installments were refreshingly serial. So is this premiere, and the next episode will be as well, with this particular tale not over by the end of the hour. I don’t know if this is an anomaly, as sometimes show stretch themselves a bit more at the beginning and end of a year, but I hope not because these have been among the best episodes so far.

“The Ungrateful Dead” is fantastic, addressing every weak point I had previously mentioned and raising itself up overall. It may not be the best show on television yet, but it’s broken into the top twenty, and it’s heading in the right direction.