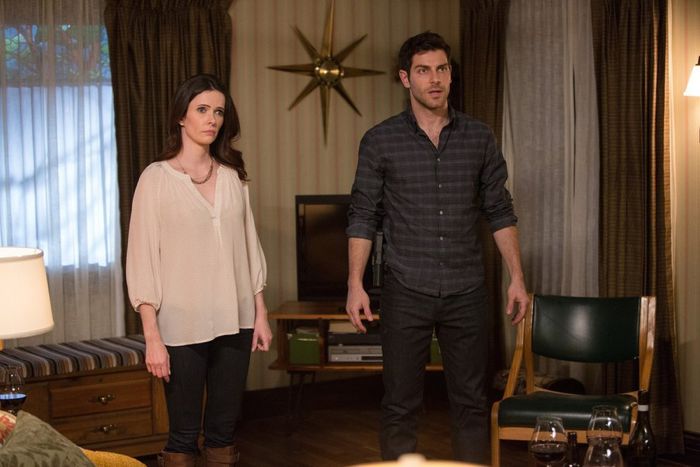 This week’s GRIMM, “Highway of Tears,” starts out far more promising than previous weeks, then sadly devolves as the hour goes on. I’m not sure why NBC thinks they need to reign GRIMM back into a case-of-the-week procedural, or even if that’s a decision being pushed at a network level. But especially when the beginning of an episode reminds us of what GRIMM can be, it’s super disappointing when the rest of the installment returns to formula.

The best plot in “Highway of Tears” is Juliette (Bitsie Tulloch) deciding to help Nick (David Giuntoli) become a Grimm again. She has to turn into Adalind (Claire Coffee) and sleep with Nick to do so, which awakens feelings of jealousy in her. However, once Juliette makes the decision that this must be done, made so that Grimm Nick can protect her harassed friends Rosalee (Bree Turner) and Monroe (Silas Weir Mitchell), she takes the situation in stride, finding humor and nobility to help her through it.

Juliette hasn’t always been the strongest character, at times whiny or helpless. “Highway of Tears” has her stepping up, being strong, and saving the day. She is pretty much the hero of the hour, making a hard sacrifice, not just in the moment, but also giving up any last chance of a normal a life, in order to do what’s right. This is a turning point for her, accepting her fate with Nick, and being a fully contributing member of the team. She has sporadically been a part of this in the past, but this seems more of a conscious decision to embrace the role, which makes a difference.

Plus, when she goes to protect Rosalee with her gun, that’s pretty badass.

Kudos must be given to Claire Coffee for her performance in “Highway of Tears” as Juliette. Tulloch did a decent enough job as Adalind when their roles were reversed, but Coffee has Juliette down. Every mannerism, expression, phrase, even the way she walks, is dead on. I kept looking for flaws in the portrayal, and found none. Coffee is truly a talent to watch, and it makes me sad GRIMM typically uses her in tiny ways, such as her small scenes figuring out where her baby is this week, when she is clearly capable of so much more.

The place where this story falls apart is after Juliette’s role in it is over. I’m completely confused about how the series tests Nick’s Grimm powers. Humans have seen a woge before when a Wesen wants them to, so why can’t Nick ever see a Wesen at all now? And in the past, it’s been established that Wesen can recognize Grimm, so why does Monroe have to ask Nick if the spell worked? Shouldn’t he be able to tell himself? Worst of all, Nick finally changes back into a Grimm during a fight scene, stupidly rushing into danger when he’s physically having issues, and then changing at exactly the right moment to sway the battle, a very tired, cheesy cliché.

Another mark against “Highway of Tears” is that the characters ignore the Wu arc again. Is he or isn’t he after Trubel (Jacqueline Toboni)? Let’s see movement on that. I’m tired of waiting.

Overall, GRIMM’s fall run has not been up to snuff. “Highway of Tears” has promising signs, but the back half of the hour, which is where the Nick-rebecoming-a-Grimm tale falls apart and the focus shifts more to the case, besmirches that a bit. I really wish the writers would buckle down and help this show hit its potential. It’s probably too late for it to be as good as Buffy the Vampire Slayer, which it could easily have been, but perhaps it still has a chance to be worth re-watching years down the line, which I’m certainly not seeing at present.