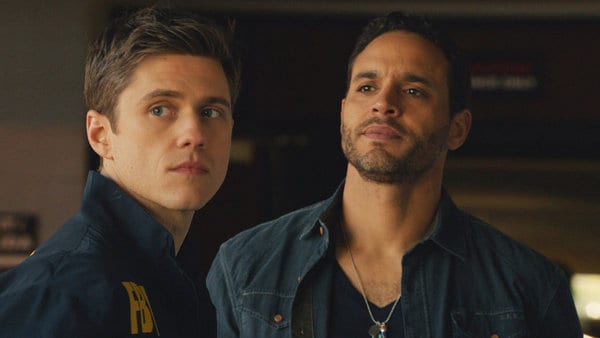 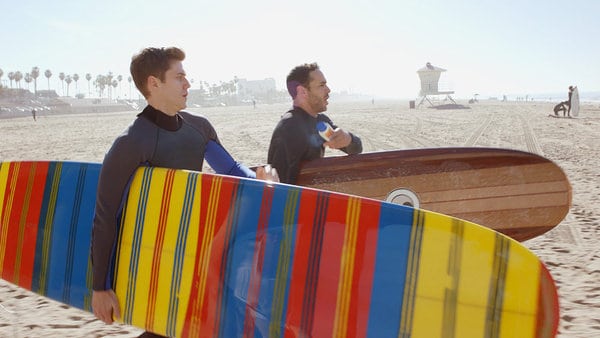 In keeping with the trend begun by Suits and Political Animals, USA’s latest drama, GRACELAND, features fully-fleshed out characters in complex, compelling situations. Created by White Collar brain Jeff Eastin, and based on a true story, this show follows FBI, DEA, and Customs agents living together in a government-seized beach house.

The setting is very pretty. The house is impressive, with great views, and letting the characters spend time in the sand and waves is fun for the viewer, too. It’s a good time based solely on this, even if the series didn’t have much else going for it. But it has plenty more.

There’s a dark edge to this location, knowing that it was once the site of some bad dealings, and this tone lives on today, underneath the surface of the friendly banter. While the housemates seem to get along well enough, there are some secrets that could unravel the whole thing. Perhaps keeping the name GRACELAND, which came about because of the previous owner’s Elvis obsession, is an intentional, constant reminder that everything is not as peaceful as it seems.

The lead is Mike Warren (Aaron Tveit, Gossip Girl), a recent graduate from Quantico who requested an assignment in D.C., but was ordered to GRACELAND instead. The reason for this is not immediately obvious, but is revealed by the end of the “Pilot,” and should prove a driving force of the freshman year. Whatever ulterior motives his bosses might have, though, it takes Mike no time at all to prove he can hold his own against the veterans that he is now living among.

Mike’s roommates include: Paul Briggs (Daniel Sunjata, Rescue Me, Grey’s Anatomy), the leader of the dwelling and grizzled FBI veteran, who is highly intelligent like Mike, but for some unknown reason has been skewing outside the lines of late; Johnny (Manny Montana, East L.A.), the class clown and friend to everyone, who puts Mike through some affectionate hazing; Charlie (Vanessa Ferlito, CSI: NY), who has been undercover as a junkie, and is good with the makeup; and Dale (Brandon Jay McLaren, Falling Skies, The Killing), the territorial customs agent.

This cast makes for quite a strong ensemble. Dale isn’t really a part of the group, since he is the lone person in the list that isn’t with the F.B.I., but the at-home scenes are as entertaining as the crime fighting, providing a light-hearted comic relief in between activities, much as a real home does, and he is invaluable in that section. GRACELAND is where the characters can mostly relax, and it’s refreshing for us and them to take a break from being heroes from time to time.

In the “Pilot,” the plot involves Donnie (Clayne Crawford, Rectify), a DEA agent who makes a mistake and blows his cover, and his partner, Lauren (Scottie Thompson, NCIS). Mike takes Donnie’s room, and Laura isn’t happy about it. But then Lauren’s quest for revenge against the bad guys that shot Donnie ends up providing the fodder for the FBI’s mission, tying the two organizations together.

It’s a shame that Donnie and Lauren aren’t sticking around. Unlike Dale, they are central to this opening story, and provide an example of how the different agencies work together in GRACELAND. They have good chemistry with the others, and it would be funny to see Mike have to find someplace else to sleep if Donnie reclaims his room.

Instead, they will be replaced by DEA operative Paige (Serinda Swan, Breakout Kings), whom we have not yet been introduced to, and so it’s hard to know what she’ll bring to the dynamic. Swan also replaced a lead from the “Pilot” in her previous serious engagement, and so seems to be carving out her niche in the genre.

Also of note are Gerry Silvo (Jay Karnes, The Shield), the FBI agent in charge on the ground, though he doesn’t live in the house, and Sam Campbell (Courtney B. Vance, Law & Order: Criminal Intent), Mike’s boss from the East. These guys aren’t as involved as the others, but will be pulling their strings, and because they are played by fantastic actors who should be sticking around for at least a bit, are worth noting.

But all of these people aside, and as much as I like a terrific ensemble, GRACELAND’s success and draw lies mainly in the relationship between Paul and Mike. There are lots of layers to the interactions, and they are the two given the most backstory. They both keep this first hour very interesting, and I’m curious to see how this latest starring duo grows, which seems likely have a similar vibe to Mike and Harvey on Suits.

The main action does feel a lot like other USA shows, especially in the vein of Burn Notice. The main players encounter someone they can’t help but feel sorry for, Felix (Mark Adair-Rios, Love That Girl!), even though their job would be easier if they didn’t assist him, and they probably aren’t strictly under an obligation to do so. It’s the kind of thing designed to instantly endear characters to viewers, and even though the attempt is transparent, it’s done well and tied into larger arcs, and so works. The show also boasts a more serious version of Psych’s humor, especially when a movie cover story comes up.

GRACELAND has a lot going for it, from sharp writing to terrific acting to an impressive production. It is the total package, combining the best elements of other shows on the network, so it still feels like a USA series, but also providing its own spices to make it unique. I can tell after only a single hour that this is a series to set a season pass for.