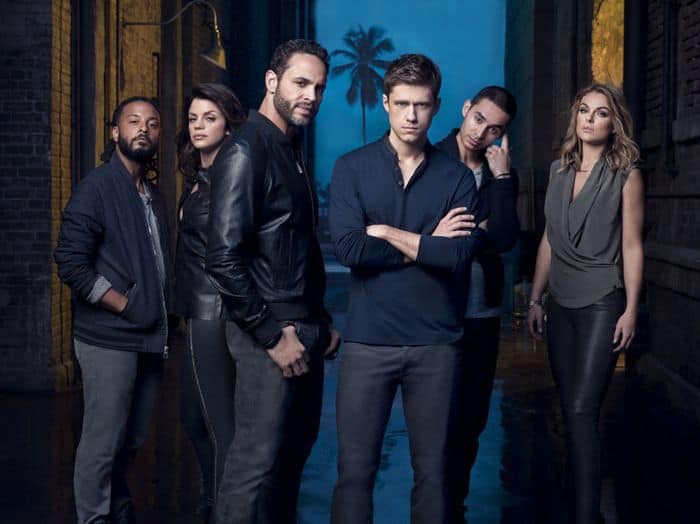 USA’s GRACELAND is back for a second season this week. The show that does for law enforcement what Suits does for lawyers, it’s one of USA’s best efforts, and it’s gratifying to have it back on the air after a very long hiatus. What’s more, while things have changed, all the familiar faces are back, and GRACELAND hits the ground running, kicking off some new, very interesting arcs.

As season one closes out, Mike (Aaron Tveit) accepts a job in D.C., his dream posting as he seeks to work his way up to a top position with the F.B.I. The season two premiere, “The Line,” picks up months later, with Mike settled into his new life, complete with a love interest. But Mike is not as happy as he first appears, and it takes no time at all before the plot forces him to return to the titular house.

Viewers always knew that Mike would have to be at Graceland again, a necessity for the premise of the show to continue, so it will be no surprise that the premiere lands him back there. What I didn’t expect it just how natural the writers would make it feel for Mike to return. He is not forced to do so against his will, nor does he go back because of a single reason. Instead, the complexity of life suggests a return as an opportunity he needs, and it fits seamlessly into the larger story.

Which is not to say that GRACELAND goes right back to a case-of-the-week procedural. Elements of that genre sprinkle the first season, and some stand-alone missions do pop up from time to time. However, GRACELAND is not a formulaic, stale series, and each installment does not exist apart from the others. Mike coming home is a much larger thread, one that has both solid reasoning behind it and implications for the future. It’s the start of something new, not just a reset.

In season two, the house has a new leader, and the entire team will be working together more. We have already been introduced to the characters, and while they do tend to help each other out, the fact that they represent different branches, such as F.B.I., ICE, and DEA, has necessitated separate stories from time to time. GRACELAND’s second season has a huge project that needs all of their attention, and Briggs (Daniel Sunjata) is not the one put in charge of this operation.

It will be interesting to see how Briggs handles taking orders. Very clearly, given his illegal activities, this senior agent is not used to playing by the rules or just falling in line. The current boss, who takes over in “The Line,” is not a new character, and knows Briggs well enough to come up with a plan for how to handle him. But can Briggs be tamed, even temporarily?

The dynamic is further shifted now that two of the housemates are hooking up. It is unclear in “The Line” if a real relationship exists or if two friends are just releasing pent-up sexual longings, but I would definitely lean towards the former. It seems unlikely that this couple is destined to stay together long-term, at least not without working through some major obstacles, but the development shakes things up in the house, even if it isn’t an obvious big change at first.

Of course, Mike does not return to all cheery smiles. He has earned the affection of his co-workers, which include Johnny (Manny Montana), Paige (Serinda Swan), Charlie (Vanessa Ferlito), Jakes (Brandon Jay McLaren), and Briggs, but that doesn’t mean history doesn’t influence how they react to him rejoining, especially as his room has already been given away to a new team member. Will Mike only stick around long enough complete the assignment laid out in “The Line,” or can he truly earn a spot among these people, one that will last?

I kind of hope it takes Mike a few years to really feel like a full-fledged member of the group. He has connections, to be sure, and he isn’t a newbie, but there’s still a feeling of outsider status clinging to Mike. This may have dissipated by now had he not moved to D.C., but he did, keeping him at arm’s length from the others. This is actually a good thing for the story, as it adds a layer of tension that would otherwise not exist. Conflict is what keeps shows interesting, and GRACELAND has plenty of it among its central cast.

As if all of this is not enough, one of the group has undergone a serious personality change. It is not explained yet, but it is commented on, definitely a purposeful choice with more to it, rather than an inconsistency. The characters are too well-defined for such a slip, and instead, it could be another new arc just getting started.

GRACELAND is a great series and “The Line” is not only true to form, but a heck of an interesting way to start the season. Fresh episodes air Wednesdays at 10 p.m. ET beginning this week.